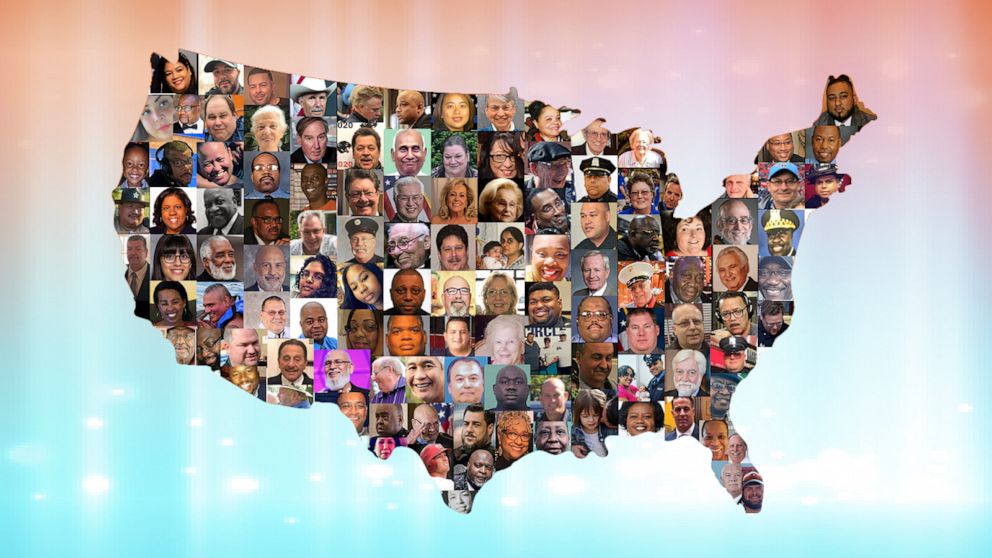 The novel coronavirus physically separated many families, friends and communities this year, but for some, their connections held strong through a shared grief over their lost loved ones. As the holiday season wraps up, ABC News remembers some of those who lost their lives from the coronavirus and whose families were missing them at the dinner table this year.

"No one wanted us to succeed more than you did and we're really thinking about you and your family," said a North Central High School student.

To honor the coach, who was also a husband and father, each high school turned on their stadium lights at 7 p.m. sharp to remember the light Loggan brought to so many young athletes.

"The one thing I want people to know about my dad is how he always put others first," said his son, Michael Loggan. "And I can't thank him enough for the childhood he gave us and the legacy he left. We all have big shoes to fill."

The coach's family started "The Paul Loggan Foundation'' to help local student athletes. His widow, Kathy Loggan, said her husband should be remembered by all the love he had to give.

Over 1.6 million people have died from COVID-19 worldwide, including over 300,000 in the U.S.. But while the recently-approved vaccines from Pfizer and Moderna promise hope, each virus death still falls heavy on the hearts of loved ones.

In El Paso, Texas, six members of Bonnie Soria Najera's family died from the virus. Najera said her relatives "were all being very careful," adding they only went outside their homes for "essential things" and she doesn't know how they all contracted the virus.

"First my mother passed away. Then my dad and my cousin Martha. My aunt Rachel, my aunt Lupe and my uncle Louie," said Soria Najera. "This Christmas, not only are we not going to be able to get together … we're going to have empty chairs that will never … be filled again."

Soria Najera implored others to take the appropriate safety measures against the virus.

"You have the opportunity to take care of yours, and make sure that they can have a next year. You don't want to be in our shoes," she added.

Husband and wife Willard and Wilma Gail Bowen, of Paulding County, Georgia, died from the virus only hours apart on Thanksgiving. The couple had been married for 50 years.

On their final day together, the hospital staff allowed them to hold hands in the intensive care unit. Their daughter, Karen Kirby, said the last thing she told her parents was that she loved each of them.

She said she knows they're at peace now because they are "together."

"While we're struggling down here, they're not. They're OK," said Kirby.

Many communities also came together this year to support their neighbors who were stricken by the virus.

In San Antonio, both parents of 5-year-old Raiden Gonzalez died of COVID-19. His father Adan Gonzalez died June 26 and his mother Mariah Gonzalez died Oct. 6. On Raiden's fifth birthday, a parade of cars lined up to cheer for the boy and strangers from all around the world sent gifts.

Raiden's grandmother and uncle are now taking care of him, and have raised more than $170,000 for the family.

On the front lines

Since the moment the virus entered the U.S., so many people on the front lines of the pandemic have shown strength, perseverance and selflessness. Some haven't survived the virus.

Dr. Carlon Arujo-Preza worked in the COVID-19 ICU at HCA Houston Healthcare Hospital in Tomball, Texas. Arujo-Preza had been treating COVID-19 patients since the spring. He died after contracting the infection in December.

Former Dallas nurse Iris Meda had come out of retirement to help with the pandemic before also dying from the virus. Her daughter, Selene Meda-Schlamel, said her mother died doing what she loved, but that the family will also miss her dearly.

"My kids want their grandmother back. I want my mother back," Meda-Schlamel said.

Meda's family has started a nurse scholarship fund in her name to continue her legacy.

Dr. Adeline Fagan, of Syracuse, New York, was 28 years old when she died from the virus. She had dreamed of becoming a doctor since she was a child.

"She was playing 'Operation' and trying to fix up her dolls. And she held onto that goal, and she went for it," said sister Natalie Fagan. "When she walked across that stage, we were just beside ourselves. So proud, because it was her dream."

Fagan had started the second year of her residency in Houston earlier this year. She helped with delivering babies and treating COVID-19 patients. She had been fighting the virus for two months before her parents traveled to Texas to see their daughter for the last time.

"My mom told me that when she had to leave, she said to Adeline, 'Adeline, I love you,' and she kissed her. And Adeline ... as loopy as she was, made a kissy face back at my mom. And so, we know that she, she knew that she was loved and that we were there, even until the end," said Natalie Fagan.

And while some health care workers like Fagan were just beginning their careers when the pandemic began, others were close to celebrating their retirement.

Isabelle Papadimitriou had been a respiratory therapist for 30 years at a Dallas hospital and was just a year away from retirement. Her daughter, Fiana Paulette Tulip, said that she knew the risks of going into work, but she insisted on going anyway.

"She went to work bravely, despite knowing how dangerous it was, and she kept going in," Tulip said.

Papadimitriou had become a grandmother in 2019 and was known to always send little gifts and messages to her loved ones. The last gift Papadimitriou sent were shoes for her granddaughter, Lua, and they arrived after she died.

"I want Lua to know that my mom was a hero, and that she stopped at nothing to be there for others," Tulip said.

As health care workers fought the virus from inside hospitals, other essential workers, like firefighters and technicians, faced the virus from the outside.

Houston Fire Station 67 captain Tommy Searcy's twin brother, Tony Searcy, said that they had planned to be firefighters together since they were children.

The pair signed up as volunteer firefighters on their 18th birthday, and over the course of 18 years, they both eventually became captains.

At Tommy Searcy's funeral, the fire squad dispatcher delivered a farewell message through the radio: "You have committed your life to serving others. Your compassion will truly be missed. Your legacy will live on."

Rolando Aravena, a communications field technician for Verizon, had been sent to a hospital in New York to help prepare for the surge in cases when he began feeling sick, too.

His wife heard his last words over FaceTime.

"He just looked at me and he said, 'Mel, I never knew a love like this before and I love you so much," said Melody Aravena.

He also left behind 10-year-old daughter Lola Aravena. Now, his family is calling on others to help however they can.

Philip Kahn, of Long Island, New York, turned 100 years old on Dec. 5, 2019. The WWII Air Force veteran died from COVID-19 this year, a century after his twin brother died of the Spanish Flu in 1919. His grandson, Warren Zysman, said he'll always be remembered.

"We love you grandpa, we miss you," he said. "You and your life will never be forgotten."

abcnews.go.com - 4 weeks ago
Authorities in central Mexico say that they have identified three people as the suspected masterminds of last week's ambush slaying of 13 law enforcement officers, and that a drug gang appears to have been involved
Read More

abcnews.go.com - 3 months ago
Loyalty to the QAnon conspiracy movement is emerging as a common thread among scores of those arrested for their participation in the deadly U.S. Capitol insurrection.
Read More

abcnews.go.com - 3 months ago
Tunisian activists are marching on parliament Tuesday as lawmakers vote on a new government, following a week of national tensions over poverty and lack of jobs
Read More
More News & Articles