Goldberg is set to face Drew McIntyre for the WWE title at Royal Rumble after a shock return on “Monday Night Raw.” The much-maligned veteran, 54, lost the Universal title to Braun Strowman at WrestleMania 36 and appeared for the first time since to
Author: The Sun
Published: 2021-01-05 10:15 am 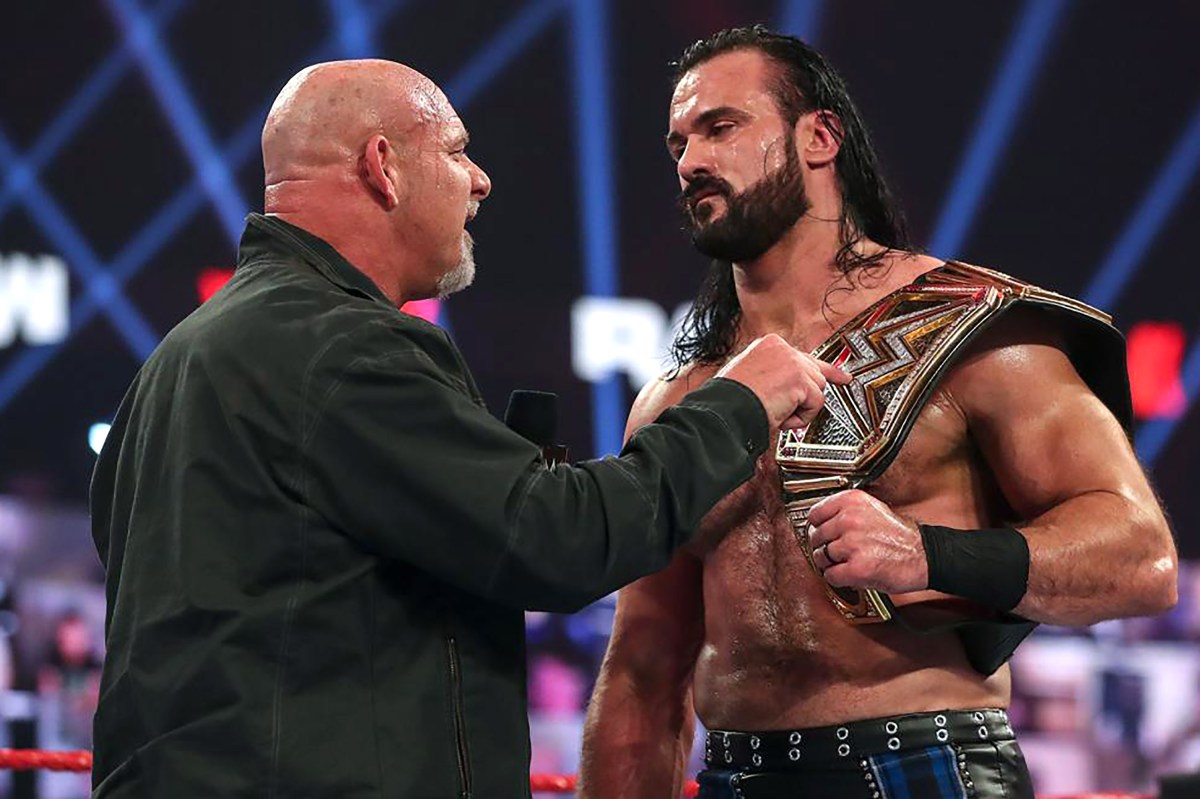 Goldberg is set to face Drew McIntyre for the WWE title at Royal Rumble after a shock return on “Monday Night Raw.”

The much-maligned veteran, 54, lost the Universal title to Braun Strowman at WrestleMania 36 and appeared for the first time since to confront the Scotsman.

He joined a host of icons in returning to WWE for a special legends episode of Monday Night Raw — but the ex-WCW star had more than just a cameo appearance on his mind.

McIntyre was defending his title against fellow powerhouse Keith Lee in the main event of the show.

The two men enjoyed an epic battle, with the Brit powerbombing his opponent through the announce table while he also managed to fight back after being caught with a Spanish fly off the top rope.

Eventually it was Mcintyre who prevailed as he landed a Claymore Kick for the win.

However, just as he thought his night was over, Goldberg’s music suddenly hit as he walked down to the ring and grabbed a microphone.

Goldberg began by praising McIntyre and said he does not get the respect his talent deserves. But he then claimed the champ only looks at legends as wrestlers out of their prime and thinks he is better than them.

Goldberg then challenged him to a title match at the Rumble on Jan. 31. McIntyre responded by saying that would be like him fighting his own dad.

And that provoked Goldberg, who angrily sent the 35-year-old crashing to the mat with a huge shove as the show went off-air.

Goldberg came out of retirement to return to WWE in 2017 but he has wrestled just four times since, receiving fierce criticism for the quality of those performances plus the huge paydays he has received.

Despite only being part-time, he is believed to have received a seven-figure fee for his two previous appearances in Saudi Arabia.

The first was in June 2019 when Goldberg lost to the Undertaker at Super ShowDown in a disastrous bout that was full of cringeworthy mistakes.

He nearly inflicted serious injury on the Undertaker with a failed Jackhammer attempt while he also suffered a concussion.

Fans were furious afterwards, and that anger intensified when he squashed the hugely popular “The Fiend” Bray Wyatt at Super ShowDown back in February to become Universal champ.

He was then due to face Roman Reigns at ‘Mania before the Big Dog withdrew from the show and was replaced by Strowman, who beat Goldberg lightning quick.

The WCW legend was believed to have retired after his disappointing recent outings, but he smashed that theory by revealing he is under contract with WWE until 2023.

www.thesun.co.uk - 1 year ago
F1 hopeful Emma Kimilainen has revealed that she once quit racing after her team told her to pose topless for a magazine. The 31-year-old took a four-year hiatus from motorsport back in 2009 but has since become a star in the all-female W Series. And the
Read More

www.thesun.co.uk - 3 months ago
The initiative was trialed after a study also commissioned by Heathrow Express found more than half of public transport users find travel stressful following the COVID-19 pandemic.
Read More

www.thesun.co.uk - 3 months ago
Presley Downs' parents decided to have a mole removed from her leg, when doctors warned there was a 10 per cent change it could turn cancerous.
Read More

‘Poisoned’ boy, 6, struggles to stand before dad and stepmom ‘tortured him to death’