As State Legislatures Aim to Convene Amid Covid, One Tries a Drive-in

New Hampshire’s House of Representatives, whose speaker died of the coronavirus, has refused to meet remotely.
Author: Ellen Barry
Published: 2021-01-07 05:00 am 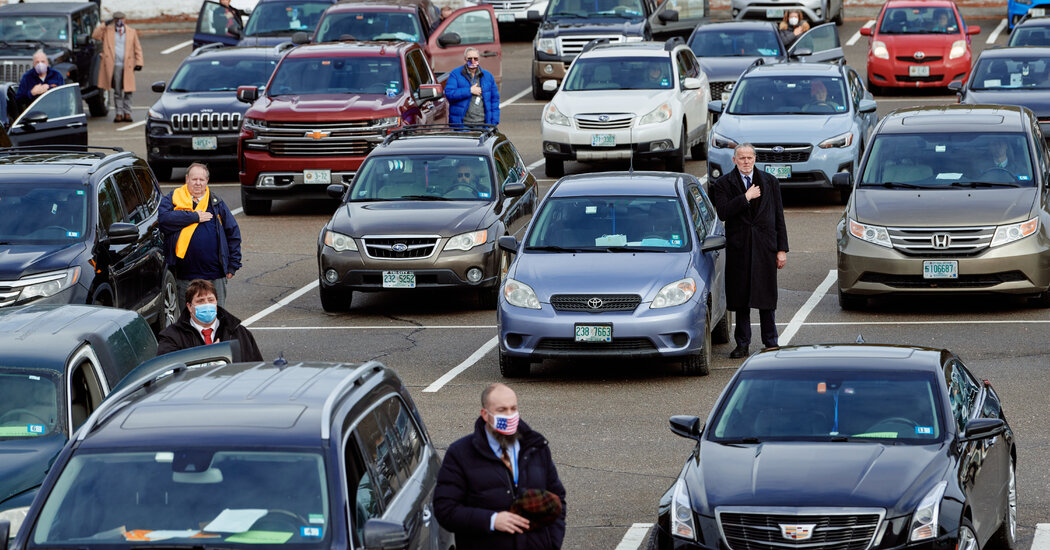 DURHAM, N.H. — New Hampshire’s House of Representatives convened on Wednesday morning in a parking lot, whipped by an icy wind and drowned out by occasional passing freight trains, in a legislative improvisation worthy of Rube Goldberg.

This was drive-in democracy: Three hundred and fifty-seven state representatives sat in idling cars, tuning into a shared radio frequency. When members expressed a desire to speak, via text message, House staff zipped across the lot in golf carts with microphones affixed to long booms, to stick into their car windows.

“If you’re having trouble with voting, please put on your hazard lights,” said the clerk of the House, Paul C. Smith, who stood on a platform, beneath a stream of passing traffic. “What’s going to happen now,” he said later, “is the staff will retreat behind me to the tunnel and count the ballots out of the wind.”

State legislatures across the country are looking for ways to conduct their business in spite of restrictions on indoor gatherings because of the coronavirus. Few solutions could be more elaborate than the one in New Hampshire, where the Republican leadership of the House, by far the largest state legislative body in the country, has resisted Democratic calls to meet virtually for safety’s sake.

That insistence was not affected by death last month of the newly elected Republican speaker, Richard Hinch, 71, from the coronavirus. He died a week after he was sworn in.

In interviews, Republican representatives dismissed their colleagues’ complaints about the safety of gathering in person.

“If you did not feel you were willing to take risks with your health, you should not have run,” said Representative Melissa Blasek, 32, a music teacher who said she was swept into politics this spring when she joined protests against coronavirus restrictions ordered by Gov. Chris Sununu, a Republican.

She said she was opposed to convening via Zoom — the option favored by the Democratic caucus — because “lots of things can be done that are not honest when you are not in person.”

“I think being remote is the quickest way to being a secret government,” she said. “You don’t know who is in the background. All you know is the person directly in front of the camera.”

Mr. Hinch’s death cast a shadow over Wednesday’s legislative session, which began with a moment of silence in his memory. But some Republicans openly questioned whether Mr. Hinch had actually died of the coronavirus, as the state medical examiner concluded.

“He didn’t,” said Representative John Potucek, 73. “He had Covid germs. I mean, if somebody dies and you’re 98 years old and you have pneumonia and they have Covid germs, they call it Covid, but they died of pneumonia.”

He added, “Dick was a big guy, he had heart problems.”

Other Republicans, like Representative Kurt Wuelper, 73, said that Mr. Hinch had knowingly accepted the possibility of contracting the virus as part of his political duties.

“He took on that risk and it killed him,” he said.

He said he and his fellow Republicans were willing to take the same risk in service of the principle of resisting government intrusion.

“This is something that transcends us,” he said. “It isn’t about me or Dick Hinch. This is about, do we have inalienable rights? Do we have any liberty at all?”

Many state legislatures are already meeting virtually or through conference calls — among them legislative bodies in Vermont and Massachusetts, and New Hampshire’s State Senate.

Twenty-eight states, as well as Guam, the District of Columbia and the United States Virgin Islands, have altered legislative rules since the spring in order to allow meeting remotely, according to the National Conference of State Legislatures.

Representative Steven Smith, a member of the Republican House leadership team, said it was not possible for New Hampshire to follow suit because of a technical problem: He said there was not yet a way for the chair to verify each member’s identity or securely register a quorum on a 400-person Zoom or conference call.

“We’re working on solutions to do that, we’re just not there yet,” he said.

The new House speaker, Representative Sherman Packard, who was elected on Wednesday to replace Mr. Hinch, has offered a slightly different explanation: He said the technology necessary to create a secure voting system would cost the state $300,000.

But the Democratic House leader, Representative Renny Cushing, dismisses both of these explanations, describing the obstacle as political in nature.

A hard-line faction within the Republican Party, galvanized in opposition to the governor’s coronavirus restrictions, has grown stronger, he said, and the House leadership is eager to accommodate them.

“We’ve asked people to forego graduations and family reunions, but the Legislature will meet, because a handful of anti-maskers are telling the Republican majority what to do, and the Republicans are going along with it,” he said. “It’s the minority dictating.”

House leaders have also suggested that a rules change could allow remote gathering, but that is unlikely: On Wednesday, the House voted 187-149 against making such a change.

New Hampshire has always had a conservative strain; it is one of only five states with no sales tax, and one of two whose governors have two-year terms.

That native conservatism has been boosted by an experiment called the Free State Project, which recruited libertarian-minded people to move to the state and run for office. More than 25 current members of the State House of Representatives are Free Staters, who moved to New Hampshire as part of the project, said its founder, Jason Sorens.

They have been joined by newcomers like Ms. Blasek, who was drawn into politics by her opposition to Governor Sununu’s coronavirus restrictions. She was one of a group of 80 Republicans who refused to wear masks at an outdoor legislative session in December.

Their enthusiasm helped the Republicans win back control the House in November, and she said she hopes her faction can pressure Mr. Sununu to lift the restrictions.

“The reality is we do have a voting bloc,” she said. “I think he is aware in a lot of ways, with the Republican majority, he has more pushback than he did with the Democratic majority.”

Representative Laurel Stavis, a Democrat from Grafton, said at indoor gatherings last fall, the maskless Republicans were “pretty intimidating,” jeering and mocking Democrats who were trying to keep their distance.

“I’ve lived in New Hampshire for 25 years and I don’t remember anything like this, it’s just such an open, in-your-face chasm, it feels like this rift opening up and people falling into it,” she said. “It’s like a force of nature or something.”

But for Mr. Potucek, a Republican, the sight of the vast parking lot on Wednesday was a triumph: His colleagues had managed to gather in person once again.

"It’s the history of New Hampshire, happening right now,” he said. “Hey, this is live free or die.”

How It Feels When Software Watches You Take Tests

www.nytimes.com - 7 months ago
Students say that monitoring programs like Proctorio and ExamSoft discourage them in the moments they’re trying to prove themselves.
Read More

www.nytimes.com - 3 months ago
The new administration can “restart” the National Highway Traffic Safety Administration, which “should be leading the world when it comes to vehicle safety,” the head of an advocacy group said.
Read More

www.nytimes.com - 7 months ago
The Philippine president made the move, which riled nationalist and gay rights groups, in the interest of maintaining an “independent foreign policy.”
Read More
More News & Articles