The Jets found their new coach. The team reached an agreement in principle with 49ers defensive coordinator Robert Saleh on Thursday night to become the 18th full-time head coach in Jets history. It is a five-year deal, according to a source. Saleh, 41,
Author: Brian Costello
Published: 2021-01-14 10:27 pm 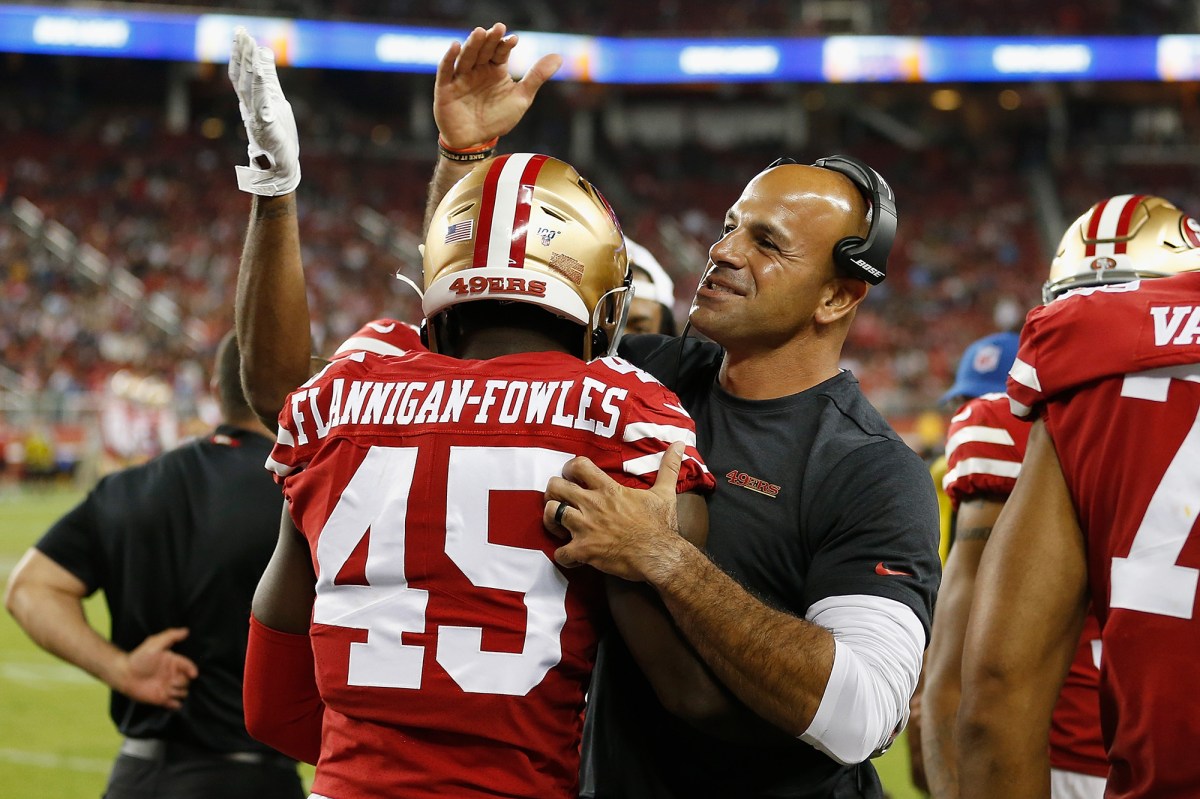 The Jets found their new coach.

The team reached an agreement in principle with 49ers defensive coordinator Robert Saleh on Thursday night to become the 18th full-time head coach in Jets history. It is a five-year deal, according to a source.

Saleh, 41, takes over a team coming off one of the worst seasons in franchise history. The Jets went 2-14 after opening the season with 13 straight losses. Saleh replaces Adam Gase, who was fired after going 9-23 in two years as head coach.

Things heated up between the Jets and Saleh on Thursday afternoon. Saleh had interviewed in New Jersey with the Jets on Tuesday and Wednesday but departed without a deal. He then met with the Eagles on Wednesday and the Chargers on Thursday about their openings. The Jets hosted Titans offensive coordinator Arthur Smith on Wednesday night and Thursday, but decided Saleh was their guy and got a deal done.

Several things impressed the Jets about Saleh. For starters, they believe he is the leader they were searching for to change the culture inside the organization and galvanize the team. They also were impressed with how he developed players in San Francisco. Finally, Saleh’s performance in 2020 showed his coaching ability. The 49ers were decimated by injuries but Saleh still guided them to be No. 5 in total defense.

Jets CEO and chairman Christopher Johnson made it clear at the start of the search that the Jets would not lock in on just one side of the ball. With all the focus on the decision whether to keep Sam Darnold or to draft a quarterback with the No. 2-overall pick, there is an argument to be made for the Jets to go with an offensive coach. But the Jets felt finding a leader was the most important thing and they felt they accomplished that with Saleh. It is believed he is going to bring 49ers passing game coordinator Mike LaFleur with him to be his offensive coordinator. LaFleur is the younger brother of Packers coach Matt LaFleur.

Saleh was one of the hottest candidates in this coaching cycle. He interviewed with six of the seven teams that had openings and had second interviews with the Jets and Chargers. The Dearborn, Mich., native was a tight end at Northern Michigan University.

He began his coaching career in 2002 at Michigan State. After stints at Central Michigan and Georgia, he went to the NFL as an intern with the Texans. He spent six seasons in Houston, working his way up to assistant linebackers coach. There, he met Kyle Shanahan, who hired him in San Francisco in 2017 to be his defensive coordinator. Saleh also was with the Seahawks for three years as a quality control coach and the Jaguars from 2014-16 as linebackers coach.

With the 49ers, Saleh took a defense that was last in the league before he got there and built into the No. 2 unit by 2019. Saleh’s defense played a key role in the 49ers’ run to the Super Bowl that year.

“I don’t know what’s wrong with people if they don’t hire him,” 49ers coach Kyle Shanahan said recently. “I mean, he’s as good as you can get. … And he’s going to hire the best staff. He knows about players. He knows who knows what they’re talking about. … And he also knows how to deal with people. So, I hope everyone’s not very smart and doesn’t hire him so I can keep him. But I’m expecting not to have him.”

Saleh, who is of Lebanese descent, is known for his energy on the sidelines and his routine of running the stairs in the stadium before games. His coaching ability shined this year with what the 49ers faced. San Francisco was without starters such as defensive end Nick Bosa (14 games), defensive tackle Solomon Thomas (14 games), edge-rusher Dee Ford (15 games), cornerback Richard Sherman (11 games) and safety Jaquiski Tarrt for extended periods of the season. Even so, the 49ers finished fifth in yards allowed (314.4 per game), fourth in passing yards (207.7) and seventh in rushing (106.4).

After the Jets announced Saleh’s hire, Sherman tweeted, “The @nyjets got a great one! Congrats to them!”

nypost.com - 2 months ago
A penthouse duplex at 215 Chrystie St. in the Lower East Side has sold for $18 million, according to property records.
Read More

nypost.com - 8 months ago
The calendar said Labor Day, but this ultimately became Groundhog Day for the Mets. Dramatically, they rallied Monday and appeared ready to win a series against the Phillies and perhaps turn momentum in the race for second place in the NL East. And then
Read More