A reported former US Marine from upstate New York fired up a “victory” cigar after breaking into the US Capitol last week — and was part of a gun-toting group that discussed returning there on Inauguration Day, federal authorities alleged Friday. Dominic
Author: Bruce Golding
Published: 2021-01-15 05:36 pm 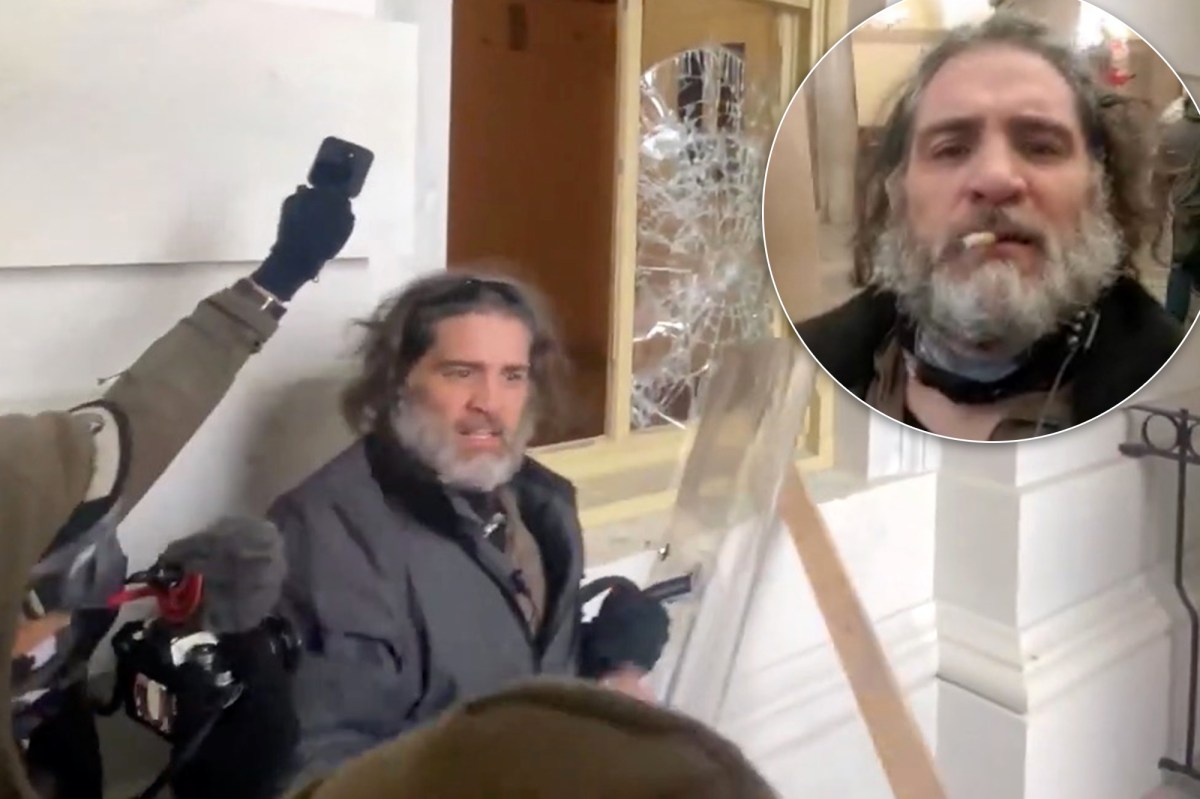 A reported former US Marine from upstate New York fired up a “victory” cigar after breaking into the US Capitol last week — and was part of a gun-toting group that discussed returning there on Inauguration Day, federal authorities alleged Friday.

Dominic “Spaz” Pezzola and his unidentified pals also allegedly said they would have killed any lawmakers “they got their hands on” during the siege, including House Speaker Nancy Pelosi (D-Calif,) and Vice President Mike Pence.

Pezzola is accused of using a stolen Capitol Police plastic shield to smash a window and climb into the building as someone yelled “Go, Go, Go!” around 2:40 p.m. on Jan. 6, according to court papers that say the incident was captured on video.

Images of the break-in are included in the document, along with a screenshot from an online video that allegedly shows Pezzola — who Vice identified as a 43-year-old member of the “Proud Boys” and a former US Marine — smoking a cigar inside the Capitol.

“Victory smoke in the Capitol, boys. This is f–king awesome. I knew we could take this motherf–ker over [if we] just tried hard enough,” he allegedly said.

The document also alleges that an informant, identified only as “W-1,” told the FBI that Pezzola “bragged about breaking the windows to the Capitol and entering the building” during a conversation with several other people afterward.

“W-1 stated that other members of the group talked about things they had done during the day, and they said that anyone they got their hands on they would have killed, including Nancy Pelosi,” the document says.

“W-1 further stated that members of this group, which included ‘Spaz,’ said that they would have killed [Vice President] Mike Pence if given the chance.”

The informant also said the group discussed plans to return on the “20th” — apparently a reference to Wednesday’s Inauguration Day for President-elect Joe Biden — and said “they plan to kill every single ‘m-fer’ they can,” court papers said.

The men claimed “they all had firearms or access to firearms,” the informant allegedly added.

In a later interview, the informant told the FBI “that the group had no definitive date for a return to Washington, D.C, but…re-iterated that the others agreed there would be guns and that they would be back soon and they would bring guns.”

Pezzola, of Rochester, was charged with obstruction of an official proceeding, destruction of government property and illegally accessing a restricted area, according to the Democrat & Chronicle.

During a virtual appearance in federal court, Pezzola looked like he’d cut his hair and beard since the Capitol siege and was ordered held at Livingston County Jail, the D&C said.

nypost.com - 3 months ago
The Knicks are banning media from the Garden for their two preseason games Wednesday and Friday – both against the Cavaliers. The club could reconsider for the regular season but for now the ban is indefinite. It is believed only one other NBA team is not
Read More

nypost.com - 4 months ago
Aaron Judge is making bold predictions — for his own health and the Yankees’ future, this offseason and beyond. The star outfielder expects the Yankees to be active adding pieces this offseason, a somewhat bold proclamation after managing partner Hal
Read More

nypost.com - 3 months ago
Drew McIntyre will begin his second reign as WWE champion with a match against the other current pillar of the company when he takes on Universal champion Roman Reigns at Survivor Series on Sunday (7 p.m., WWE Network). The champ took time for some Q&A
Read More

nypost.com - 5 days ago
The iconic Windows XP default desktop wallpaper of a sloped green hill beneath a bright blue sky is one of the most viewed photos in the world, but surprisingly difficult to locate in reality.
Read More
More News & Articles