Starbucks wants to make getting a coronavirus vaccine as easy as grabbing a pumpkin spice latte. Washington State officials tapped the coffee giant to help them ramp up the state’s COVID-19 vaccination capacity with the goal of inoculating 45,000 people a
Author: Noah Manskar
Published: 2021-01-19 10:53 am 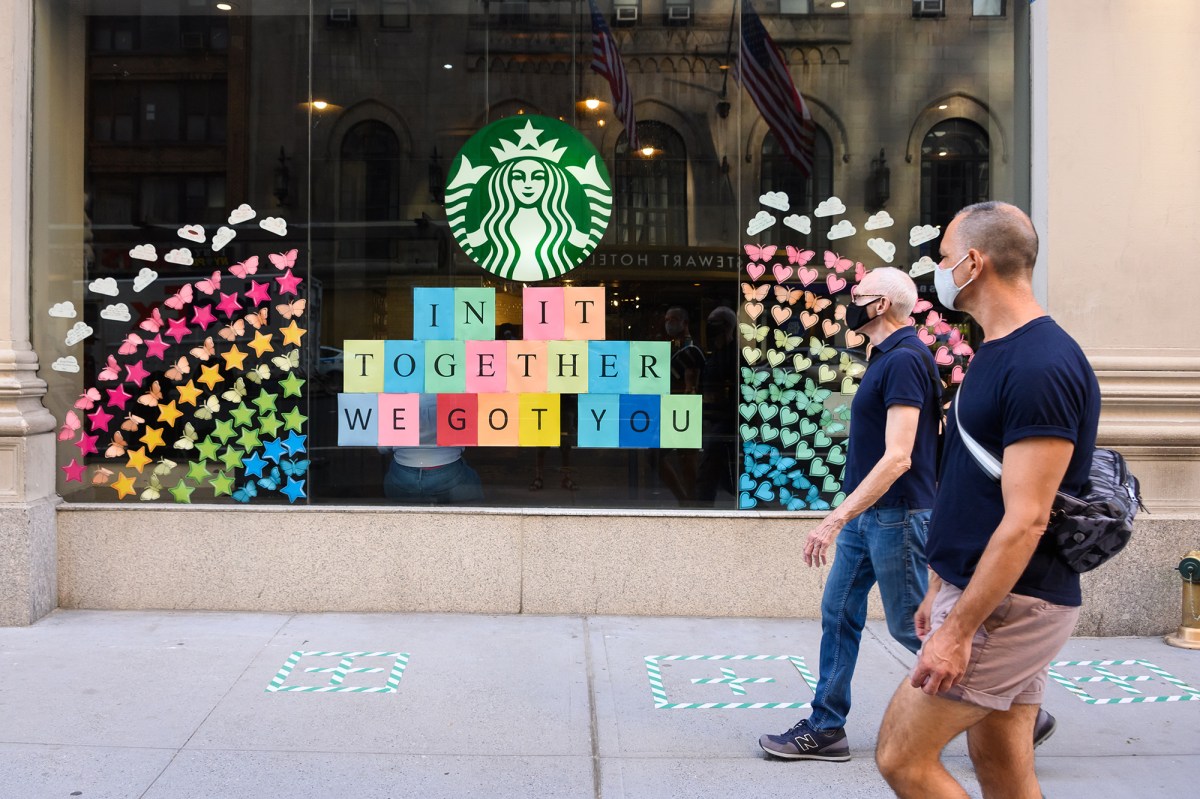 Starbucks wants to make getting a coronavirus vaccine as easy as grabbing a pumpkin spice latte.

Washington State officials tapped the coffee giant to help them ramp up the state’s COVID-19 vaccination capacity with the goal of inoculating 45,000 people a day.

“As a state and as a nation, building vaccination capacity puts us in a position to play offense with this global pandemic,” Johnson said at a press briefing Monday.

Other Washington-based companies including Microsoft and Costco will also play a role in the state’s vaccination campaign along with the National Guard and health-care groups such as Kaiser Permanente, Gov. Jay Inslee’s office said.

Washington officials are currently vaccinating between 13,000 and 15,000 people each day, according to Inslee. While the state’s goal of 45,000 daily shots would outpace its supply of 100,000 doses a week, Inslee said officials want to have more capacity in place before the feds start sending more vaccines.

Starbucks has “been pretty good at delivering coffee, with good coffee around the world,” the Democratic governor told NBC News. “They have logistical assistance, which is quite helpful, in fact, training other entities how to run a high-throughput vaccination center.”

Inslee announced the plan amid concerns about the slow pace of the vaccine rollout in the US.

The feds have distributed more than 31 million doses across the country, but only about 12 million had gotten into Americans’ arms as of Friday, according to the Centers for Disease Control and Prevention.

“At this rate of vaccinations, it’s going to take six, seven, eight years for this country to get vaccinated, and we can’t think that’s an acceptable pace,” Johnson told NBC.

US GDP jumps 7.4 percent in third quarter, a record-setting rebound

nypost.com - 4 months ago
The US economy staged a record-setting rebound from the coronavirus crisis in the third quarter, the feds said Thursday — but there’s still a long way to go before the nation makes a full recovery. America’s gross domestic product — the value of all goods
Read More

nypost.com - 5 months ago
Life is full of surprises. Like, Washington’s amazing Week 1 rally against the Eagles, or some people not thinking masks help during a pandemic, or it looks like Robert Pattinson is going to be just fine playing Batman. Or CeeDee Lamb was going to be an
Read More

No timetable yet for Mitchell Robinson’s Knicks return

nypost.com - 2 weeks ago
Mitchell Robinson was having a massive first half Friday night before fracturing his right hand late in the second quarter of the Knicks’ 109-91 win in Washington. The team’s starting center will be reevaluated Saturday back in New York, but it appears as
Read More

nypost.com - 4 months ago
A third grand juror in the Breonna Taylor case plans to speak out about the controversial deliberations that cleared three Louisville cops of any criminal liability in the 26-year-old emergency room tech’s death, according to reports. The announcement
Read More
More News & Articles