A mural of Sen. Bernie Sanders in Washington DC was vandalized with a likeness of Pepe the Frog in a suspected hate crime, police said. The colorful “Bern the System” artwork painted onto a concrete wall beneath Interstate 395 in the 100 block of H Street
Author: Joshua Rhett Miller
Published: 2021-01-19 10:55 am 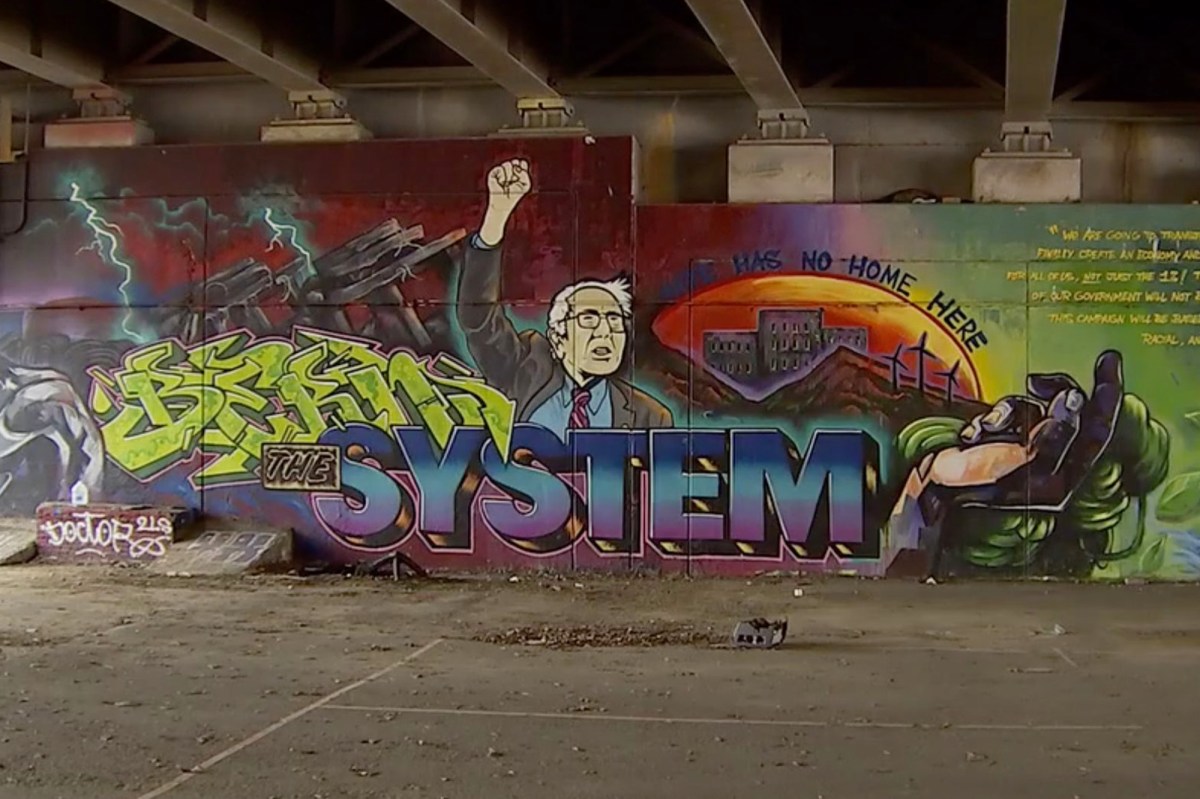 A mural of Sen. Bernie Sanders in Washington DC was vandalized with a likeness of Pepe the Frog in a suspected hate crime, police said.

The colorful “Bern the System” artwork painted onto a concrete wall beneath Interstate 395 in the 100 block of H Street in the city’s Navy Yard section was defaced sometime between Dec. 15 and Thursday with the cartoon image that’s been adopted as a hateful meme by some alt-right extremists, police said.

Cops were called to the site Saturday by one of the artists involved who felt the vandalism might be “motivated by hate or bias of political or religious affiliation,” a police report obtained by The Post shows.

The artist was in the process of fixing the mural when officers responded to the scene. An investigation into the “suspected hate crime” possibly motivated by “anti-Jewish” sentiment is ongoing, according to the police report.

Sanders, a 79-year-old independent senator from Vermont, is Jewish, the police report notes.

No arrests have been made as of early Tuesday, police said.

“The case remains under active investigation,” a Metropolitan police spokeswoman wrote in an email.

Doron Ezickson, head of the Anti-Defamation League’s Washington office, told WTTG that DC police have contacted the organization regarding the mural, which has since been repaired.

The artwork now appears to feature a new phrase near Sanders’ head that reads: “Hate has no home here.”

“The appropriation of that symbol somehow became an expression of power by the individuals that were doing it and then it spread over the internet and different chat rooms and 8chan and Reddit and some of the places where alt-right and white supremacists folks find each other and share ideas and share strategies,” Ezickson said.

A message seeking comment from Sanders’ office was not immediately returned Tuesday.

nypost.com - 2 months ago
The NHL said Friday that six Dallas Stars players and two staff members have tested positive for COVID-19 in a development that will push back the opener for the defending Western Conference champions by nearly a week. The Columbus Blue Jackets also held
Read More

Mike D’Antoni was a factor in Nets’ James Harden trade

nypost.com - 2 months ago
James Harden made his Nets debut Saturday at Barclays Center. And peeling back the layers of this megadeal like layers of an onion, it’s become increasingly clear that the losses that drove him from Houston to Brooklyn weren’t just those in the playoffs,
Read More

nypost.com - 3 months ago
A young Georgia girl was accidentally shot and killed by her friend as the two 5-year-olds played with a loaded gun last week, authorities said. Jada Willingham and her friend were playing with the gun inside a bedroom of a Lithonia home Friday when the
Read More

nypost.com - 5 days ago
TAMPA — Clarke Schmidt said Saturday his expectations for 2021 haven’t changed despite being sidelined with an elbow injury since his first bullpen session of the spring last week. The Yankees right-hander was shut down after suffering a common extensor
Read More
More News & Articles