More than 10 million people are under winter weather alerts from California through Wisconsin due to a winter storm developing in the Golden State and heading for the Midwest.
Author:
Published: 2021-01-24 04:41 am 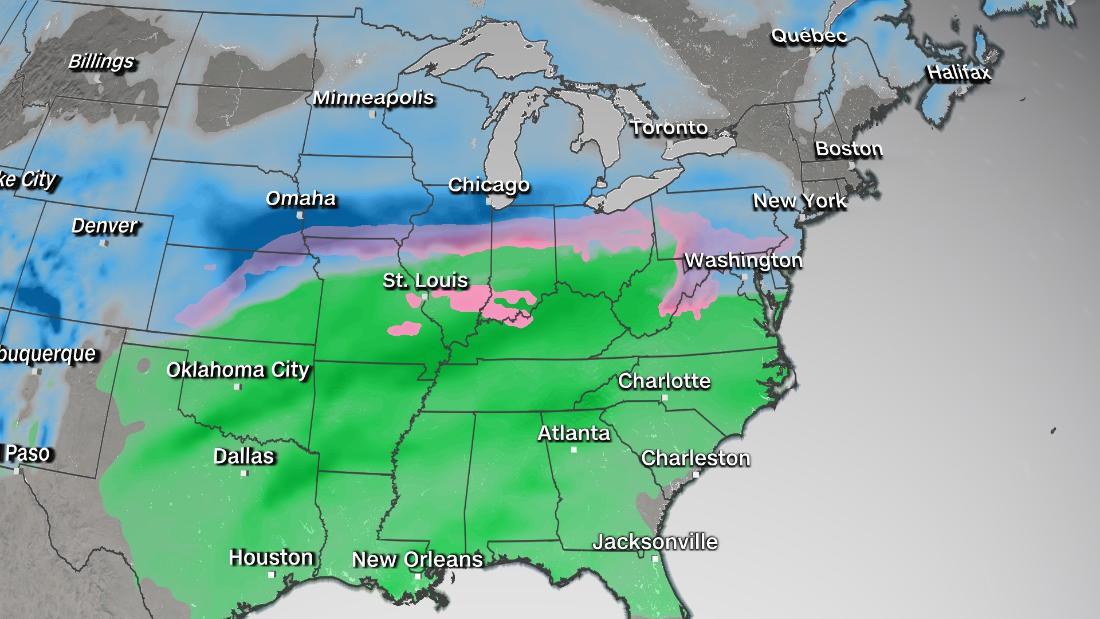 (CNN)More than 10 million people are under winter weather alerts from California through Wisconsin due to a winter storm developing in the Golden State and heading for the Midwest.

Confidence is growing that a significant winter storm will be pushing through portions of the Midwest at the start of the week. Several locations could see heavy snowfall, gusty winds, and dangerous ice accumulations.

At the same time, a series of systems are moving through the southwestern US where the moisture is much needed to help ease drought conditions.

"A pair of winter storms will impact the area Sunday and Monday afternoon into Tuesday with a good chance of valley rain and mountain snow," according to the National Weather Service office in Tucson. "The strongest and coldest storm is expected to start Monday afternoon with lower snow levels possible and more significant accumulations in the mountains."

Widespread rainfall across the desert southwest will be up to 1 inch, but snowfall across California, Arizona and Colorado could exceed 1 foot through Monday.

Snow in the desert may sound like an oxymoron, but it depends on which desert you're referring to as elevation plays a key role and mountain range peaks vary widely. The forecast area for the National Weather Service office in Las Vegas includes portions of three major US deserts: the Great Basin, Mojave, and Sonoran.

"Elevation is a huge factor for snow in the Western US as elevation varies widely," said Jenn Varian, a weather service meteorologist in Las Vegas. "Our forecast area has both the highest elevation and the lowest elevation point in the CONUS (continental United States). And they're in the same county!"

Varian is referring to Mt. Whitney, the tallest mountain in the 48 states at 14,505 feet in the Sierra Nevadas, and Badwater Basin, which is 282 feet below sea level in Death Valley. They are about 84 miles apart in Inyo County, California.

This means snowfall accumulations will range from just a few inches for elevations of less than 4,000 feet to more than a foot of snow at elevations above 6,000 feet across Arizona, California and Nevada.

Then another system is forecast to push through the region on Wednesday.

"The midweek system aligning with an atmospheric moisture surge has the potential to dump an extreme amount of precipitation, potentially flirting with snowfall duration records, in portions of southern California and the western Great Basin," Varian says.

The region badly needs the rain and snow. Nearly 80% of the western US is under drought conditions, with nearly 25% under exceptional drought, the highest level possible.

The first system will gradually shift from the Southwest into the central Plains and Midwest.

A swath of very heavy snow will extend from northern Kansas to northern Illinois through Monday. Widespread snowfall totals of 6-8 inches, with over one foot possible across areas of Iowa.

Ice is also in the forecast and could potentially accumulate up to a quarter inch across several states. For now, the highest confidence in ice exists from Topeka, Kansas to Philadelphia.

Even though it is January, many Midwestern cities have with snowfall deficits this winter.

Both Grand Rapids and Marquette, Michigan, are about 30 inches below normal for the season. Oddly, some Southern cities have actually seen more snow than ones in the Northeast.

For instance, Amarillo, Texas, has had more than 15 inches of snow, surpassing Green Bay, Wisconsin, which has had 11, as well as Chicago with about 9 inches total.

As of Saturday, Milwaukee has picked up 11.9 inches, which is the exact same amount as Oklahoma City.

San Angelo, Texas, has had 5.8 inches, which is more than Cincinnati, Indianapolis and Louisville, Kentucky.

At this point, the forecast snowfall across the Midwest is likely not enough to make up the difference in snowfall deficits in some of these cities.

On the southern side of that same system pushing through the Midwest, moisture pulled up from the Gulf of Mexico will create conditions for moderate to heavy rainfall to develop. This could lead to an elevated threat for excessive rainfall and flash flooding conditions, especially for the southern Plains and the Ohio and Mississippi River valleys.

From Oklahoma through Kentucky, rainfall totals of 1-3 inches are expected with isolated higher amounts.

There is the potential for some strong to severe thunderstorms across portions of Arkansas, Oklahoma and Texas on Sunday. More than 15 million people are under at least a marginal risk for tornadoes, damaging winds, and large hail Sunday evening through early Monday morning.

One minute and 42 seconds of Van Halen's guitar transformed music

www.cnn.com - 7 months ago
Apart from all the other things for which he is now being remembered and mourned, Eddie Van Halen -- who passed away Tuesday at the age of 65 -- was among the most important figures in the development of electric guitar playing in the second half of the
Read More

www.cnn.com - 1 month ago
The "Space Jam: A New Legacy" trailer stars LeBron James as the franchise's new basketball hero, with plenty of nods to the 1996 Michael Jordan classic.
Read More

US Ambassador to China stepping down as tensions with Beijing rise

www.cnn.com - 8 months ago
Terry Branstad will be stepping down as United States Ambassador to China after more than three years in Beijing, a source confirmed to CNN Monday.
Read More
More News & Articles