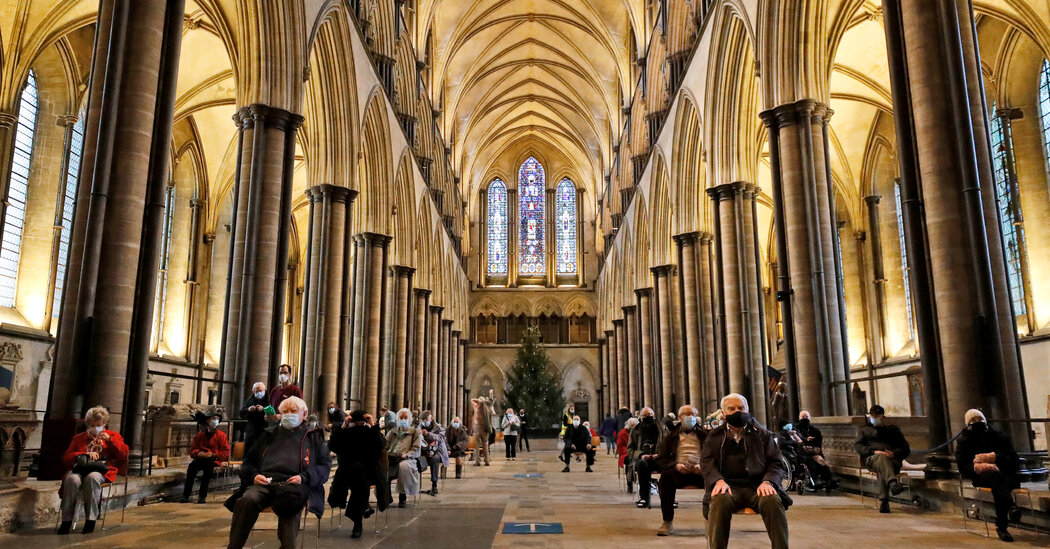 We’re covering growing concerns about the new variants of the coronavirus, the threat of the global far right and the deadly art of lobster diving.

Britain’s disclosure Friday that a new variant of the virus could be deadlier than the original has silenced those who had been calling for a swift return to life as it once was.

The British government is expected to announce in coming days that it will prolong and tighten the nationwide lockdown imposed by Prime Minister Boris Johnson this month. Schools may stay closed until Easter, while travelers arriving from overseas could be required to quarantine in hotels for 10 days.

For Mr. Johnson, who has faced unrelenting pressure from members of his own Conservative Party to begin easing restrictions, the warning about the variant was a powerful argument that Britain could be in the middle of a severe new phase of the pandemic — and that relaxing restrictions now could be calamitous.

Repercussions: While scientists agree that evidence of the variant’s greater lethality is preliminary, they said it nonetheless served the government’s purposes in the debate over lockdowns, in which Mr. Johnson, pulled between science and politics, has often shown an aversion to taking hard steps.

United around the world by racist ideology that has been supercharged by social media, some far-right extremists have been galvanized by the events of Jan. 6 at the U.S. Capitol.

Though many online disavowed the storming of the Capitol as amateurish bungling, others saw it as a teaching moment — about how to pursue their goal of overturning democratic governments in more concerted and concrete ways.

It is difficult to say exactly how deep and durable the links are between the American far right and its European counterparts. But officials are increasingly concerned about a web of diffuse international links, and worry that the networks, already emboldened in the Trump era, have become more determined in recent weeks.

Germany: After the violence in the U.S., the authorities in Germany tightened security around the Parliament building in Berlin, where far-right protesters — waving many of the same flags and symbols as the rioters in Washington — had tried to force their way in on Aug. 29. For now, no concrete plans for attacks have been detected in Germany, officials said.

As the world approaches 100 million coronavirus cases — including 25 million in the U.S. as of Saturday, and nearly 30 million in Europe — questions are surfacing about new variants of the virus that could slow or even reverse the progress that has been made toward ending the pandemic, as well as about the unequal rollout of vaccines around the world.

One of those questions is how effective the current vaccines will be against these altered versions of the virus, which initially appeared in Britain, South Africa, Brazil and the U.S. Some appear to be more contagious than the original version, and all are little understood.

At the same time, failing to distribute Covid-19 vaccines to poor countries is likely to cause global economic devastation, in which affluent countries will be hit nearly as hard as those in the developing world, according to a new study commissioned by the International Chamber of Commerce to be released today.

By the numbers: In the most extreme scenario — with wealthy nations fully vaccinated by the middle of this year, and poor countries largely shut out — the study concludes that the global economy would suffer losses exceeding $9 trillion, a sum greater than the annual output of Japan and Germany combined.

Along the impoverished northeast Caribbean coast of Nicaragua, the mostly Indigenous population depends on fishing — and high-priced spiny lobster is among the most sought-after quarry.

But lobstering there is a stunningly dangerous pursuit. Hundreds of fishermen have been paralyzed in the chase for lobsters and other delicacies like conch and sea cucumbers found deep in the ocean.

Trump impeachment trial: The House of Representatives will deliver its impeachment charge against former President Donald Trump to the Senate today, but the trial will not begin before Feb. 8.

Asia’s “El Chapo”: Tse Chi Lop, said to be the leader of a multibillion-dollar drug syndicate, was arrested in Amsterdam on Friday and faces extradition to Australia.

Chinese miners: Two weeks after an explosion left a group of miners trapped below ground in Shandong Province, at least 11 were found alive and lifted to the surface on Sunday.

Snapshot: Above, supporters of the jailed opposition leader Aleksei Navalny in Moscow on Saturday hold banners that read, “Don’t be afraid. Don’t be silent,” and “One for all and all for one.” There were demonstrations in more than 100 cities on Saturday, the biggest protests in Russia since at least 2017. Analysts say the standoff between the Kremlin and its critics seems poised to intensify.

Cosmic lost and found: Missing: one very, very large black hole. One of the biggest galaxies in the universe seems to lack its dark centerpiece — and despite astronomers’ best efforts, they’re no closer to finding it.

“This was for Nepal”: A group of climbers from Nepal earlier this month became the first people in the world to summit K2 in winter, a mountaineering challenge that had been believed by many to be impossible.

What we’re reading: This GQ piece by Douglas Emhoff, about his role as the first “second gentleman.” It’s an interesting read about reinventing yourself.

Knit: Crafters in search of Harry Styles’s colorful cardigan and Bernie Sanders’s inauguration mittens are reverse-engineering their own patterns.

Watch: Revisit — or perhaps enjoy for the first time — five movies that define the romantic comedies of the 1980s.

You can stay safe while making time for yourself. At Home has our full collection of ideas on what to read, cook, watch, and do while staying indoors.

With reporter-staffed bureaus in some 30 countries, The Times can report quickly on breaking news happening almost anywhere. Our three main hubs of newsroom operations — New York, London and an Asia hub that has been in Hong Kong but is moving to Seoul — are at the center of that effort. Here’s a glimpse at how it works.

At the end of the workday in New York, editors will hand off coverage to editors in Hong Kong and Seoul, who are currently 13 and 14 hours ahead on the clock. As editors in Asia wind down their day, a waking London newsroom will take over as the primary hub. Several hours later, that team will pass the baton back to New York, and it all repeats again, a rotation that is critical for a 24-hour news operation.

“There’s a lot of overlap,” said Adrienne Carter, The Times’s Asia editor, “so there’s probably only a handful of hours where any one group is on its own.”

When Asia hands off coverage to London, a newsroom of about 70 staff members must keep watch on four continents. The journalists start the newsroom’s coverage of Europe, Africa and the Middle East, while often also coordinating news early in the U.S. morning with the International, National and Science desks, as well as the Washington bureau.

Jim Yardley, the Europe editor, said that the way the international newsrooms are structured helps makes the joint effort seamless. “One of the things about London and Hong Kong is that, primarily, they are outgrowths of the International desk, but they are part of every desk in many ways,” he said. “It’s an attempt to actually make the work more collaborative and less siloed.”

That’s it for this briefing. Wishing you a pleasant start to the week.

Thank you
To Theodore Kim and Jahaan Singh for the break from the news. You can reach the team at briefing@nytimes.com.

P.S.
• We’re listening to “The Daily.” Our latest episode is on President Biden’s executive orders and how governing by decree can be fraught.
• Here’s our Mini Crossword, and a clue: Champ or Major, for the Bidens (three letters). You can find all our puzzles here.
• Marcela Valdes, who has covered politics, culture, immigration and more for The New York Times Magazine for many years, is joining the Magazine as a staff writer.

www.nytimes.com - 4 weeks ago
There are still roughly 30 candidates seeking to replace Mayor Bill de Blasio, who cannot run for re-election because of term limits.
Read More

www.nytimes.com - 6 months ago
In a new C.D.C. survey, 18- to 24-year-olds reported the highest levels of symptoms of anxiety and depression, and a quarter of them said they had seriously considered suicide.
Read More

What Qualifies as Success at Borussia Dortmund?

www.nytimes.com - 2 months ago
Borussia Dortmund’s business is winning matches and grooming some of the world’s best young talent. To do both, sometimes you have to put up with a few growing pains.
Read More
More News & Articles