Tony DeAngelo ran the first power-play unit a year ago when the Rangers placed seventh in the NHL with the man-advantage at a 22.9 percent clip. And No. 77 was on the right point through this year’s opening night 4-0 defeat to the Islanders in which the
Author: Larry Brooks
Published: 2021-01-27 12:19 am 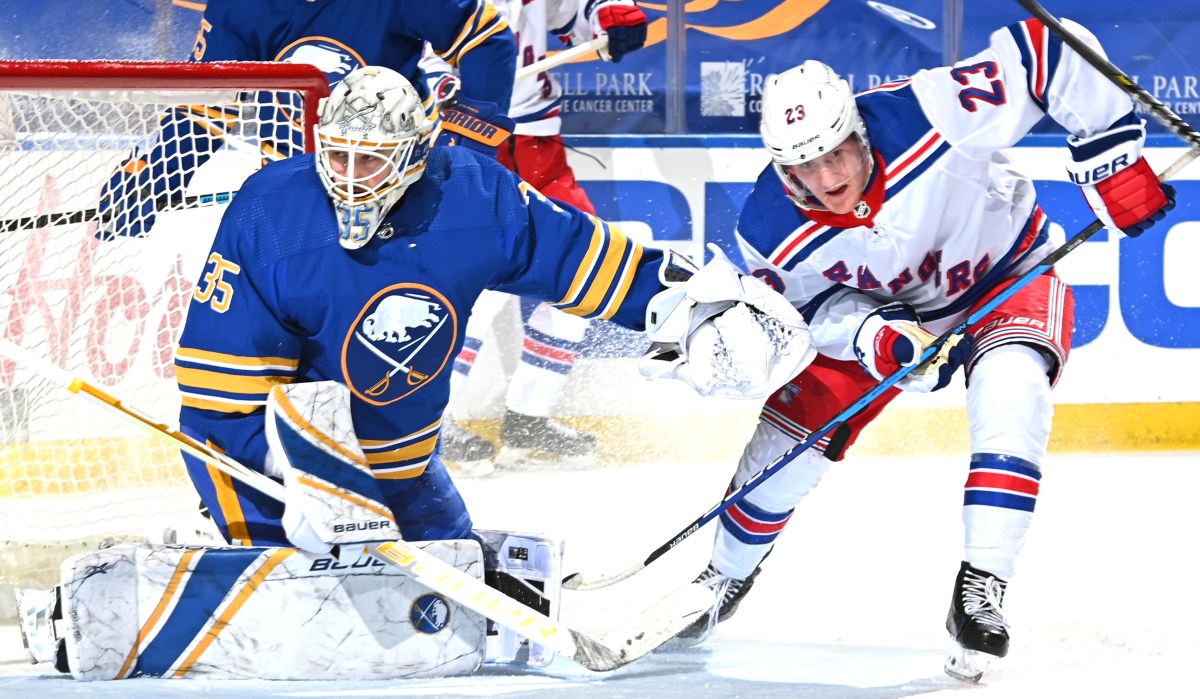 Tony DeAngelo ran the first power-play unit a year ago when the Rangers placed seventh in the NHL with the man-advantage at a 22.9 percent clip. And No. 77 was on the right point through this year’s opening night 4-0 defeat to the Islanders in which the Blueshirts went 0-for-2 on the power play.

But DeAngelo, who then rather famously sat out the next two matches, has lost that assignment to Adam Fox with the two young, right-handed defensemen switching places on PP1 and PP2.

And to hear it from David Quinn, it does not seem as if that alignment will change any time soon, even though the Rangers had gone 4-for-24 over the five games in which Fox had the lead role, including an 0-for-3 in Tuesday’s 3-2 defeat in Buffalo.

“When you have Fox and DeAngelo, you have two pretty premier power-play guys, and as you’ve watched, Fox is off to a fabulous start,” the coach said before the match. “I just love everything he’s been doing on that power play so far.”

Fox’s even-strength play has been outstanding at both ends of the ice, while DeAngelo has yet to ignite his game while primarily paired with Jack Johnson. Interesting, though, while Fox has been on for all four of the Blueshirts’ PPGs (on 26 opportunities in a total 41:37), he has been on for 24:33 while No. 77 has gotten a sum of 9:48 with the man-advantage.

“It doesn’t mean he’s there forever,” Quinn said of Fox. “But his overall play has been so high, I just don’t want to make that move yet and change it.”

Brendan Lemieux rejoined the lineup after sitting out as a healthy scratch for Sunday’s 3-2 defeat in Pittsburgh. But while he filled the lineup spot vacated by the injured Filip Chytil, winger Julien Gauthier watched in street clothes for the third straight match as the coach’s decision.

“We certainly talked to both these guys and there’s clarity on what they need to do,” Quinn said. “And we’ll see Julien again real soon.”

Brendan Smith went through the revolving door back out of the lineup in order to accommodate Johnson’s return.

Quinn called the Rangers performance in going 17-for-56 (30.3 percent) in faceoffs, “abysmal.” Brian Boyle, who could lend aid at the dots, on the PK (a poor 6-for-20 following this 2-for-4), and in the room as a grown man, is available as an unsigned free agent. But the question would concern the 36-year-old’s ability to get into game shape as quickly as the Rangers would need him to be. Another couple of weeks may be too late.

Alexis Lafreniere endured his sixth straight game without a point, equaling Jack Hughes’ getaway drought from a year ago. Steven Stamkos, in 2008-09, was the last first-overall draft selection to go longer before recording his first point. The Tampa Bay center was kept off the sheet for his first seven contests.

Lafreniere played primarily with Brett Howden and Kaapo Kakko on the third line that was remodeled in the aftermath of Filip Chytil’s injury. The winger got just two shifts over the last 9:27, but he was on the ice for the match’s final 2:34 when the Rangers pulled their goaltender and had a six-on-four power play for the last 1:37.

Lafreniere finished with 14:58 of ice time. Lafreniere had three shots on four attempts.

Alexandar Georgiev surrendered three goals on 24 shots for an .875 save percent. His second game shutout of the Islanders represents the only game in which the starting Rangers goaltender posted higher than an .879 save percentage. The club entered the match 23rd in even-strength save percentage at .909.

Phil Di Giuseppe, who opened on the right with Artemi Panarin and Ryan Strome, fell out of the rotation as the Rangers cut down the bench in the third and played just two shifts worth 1:41 in the third, his final ending with 13:16 to play.

The Rangers are in Buffalo again on Thursday before returning to the Garden on Saturday for the first of two against the Penguins, followed by one against the Capitals.

nypost.com - 4 weeks ago
St. John’s stunning upset of third-ranked Villanova on Wednesday night was about more than the moment. It wasn’t just the significance of a 9.5-point underdog thoroughly outplaying the premier program in the Big East. It wasn’t about proving the Red
Read More

nypost.com - 3 months ago
Congresswoman Tulsi Gabbard renewed her bid for President Trump to pardon Edward Snowden and Julian Assange, saying the two whistleblowers should be rewarded for exposing “the deception and criminality of those in the deep state.” On Thursday, the former
Read More

nypost.com - 3 months ago
He’ll be home for Christmas. Britain’s longest-suffering coronavirus patient — hospitalized for 222 days, or nearly eight months — is a father of five whose family more than once refused to let him be taken off life support, according to the Mirror. Now
Read More
More News & Articles