‘Hightown’ Review: Crime on Cape Cod, With a Hint of Elmore Leonard

The Starz series offers a tough and troubled heroine who chases a murderer through picturesque beach towns and back roads.
Author: Mike Hale
Published: 2020-05-15 01:04 pm 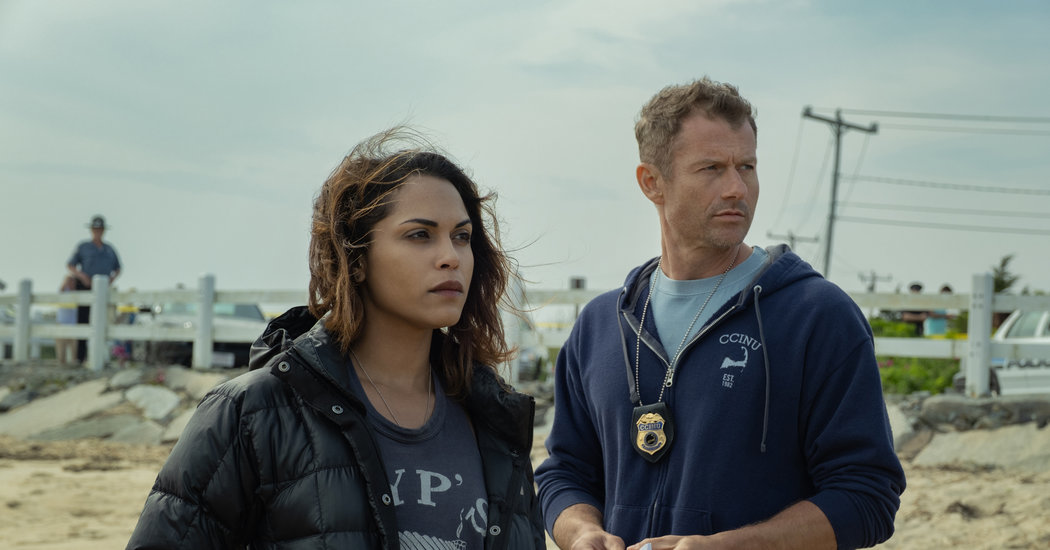 Jackie Quiñones, the heroine of the new Starz policier “Hightown,” is an off-brand variety of cop, a fisheries agent who boards boats looking for contraband or lobsters that are too young. She’s feisty and contrarian and lives and works in a scenic area with a distinctive local culture, Cape Cod.

In other words, she’s a lot like an Elmore Leonard character, and “Hightown,” which begins an eight-episode season on Sunday, has some of the idiosyncratic, lived-in appeal of a Leonard story, at least early on. It’s not at the level of actual Leonard adaptations like “Justified,” set in the Kentucky hills, or “Karen Sisco,” set on the Florida coast, but as regional crime shows go, you could do a lot worse over at Netflix or HBO.

Jackie (Monica Raymund), a compact and explosive young woman who prowls the streets and bars of Provincetown like a hungry cat, has a major chip on her shoulder. The reasons aren’t spelled out in any depth — maybe they’re being held for another season, maybe there aren’t any — but one thing that sets her off is being told she isn’t a real cop.

If she were, though, she’d probably be a bad one. Her appetite for shots and drugs seems bottomless — we see her walking through a street fair doing cocaine straight out of the bag, as casually as if she were eating a funnel cake — and she’s quick to use her badge and gun to turn on the out-of-town women she serially hooks up with. “I’m in law enforcement” is her go-to pickup line.

“Hightown” is in part a rehab and redemption story, but in an organic way that mostly avoids preaching and solemnity. Stumbling out to the beach one morning to nurse a hangover, Jackie finds the body of a woman who was shot in nearby Truro and dumped in the bay. It shakes her, and when she later stumbles on a piece of evidence connected to the murder, something clicks: She wants to solve the case, for the sake of the victim but also as a way to get back her own self-respect. She wants to be a real cop.

Raymund, formerly a regular on the NBC bellwether “Chicago Fire” (and the sexy prosecutor Dana Lodge on “The Good Wife”), is all there as Jackie, wholly alive and believable from the moment we meet her. She makes the character’s toughness and cynicism tangible, and she communicates her depths of regret and panic — hidden until they’re not — without any maudlin excess. And, crucially, she captures the corresponding wild energy and joy — the way that obsessing over the case fits with Jackie’s addictive personality, and the unseemly delight she feels whenever her instincts prove right.

“Hightown” is full of engaging, unfussy performances in sharply drawn roles — the standouts include Riley Voelkel as a stripper connected to the case, Atkins Estimond as a killer with a philosophical cast of mind and Mike Pniewski (the political operative Frank Landau in “The Good Wife” and “The Good Fight”) as Jackie’s avuncular partner. The most recognizable names in the cast, both fine in more formulaic parts, are James Badge Dale as a state cop who serves as Jackie’s foil and Amaury Nolasco as an imprisoned drug dealer.

They bounce off one another in a story that has both more piquancy and more common sense than the usual TV mystery, especially in the first few episodes, which were written by the show’s creator, Rebecca Cutter (“Gotham”), and directed by the noted cinematographer Rachel Morrison (“Black Panther,” “Fruitvale Station”).

“Hightown” loses some of its momentum in later episodes — the story bogs down a bit and the pieties about addiction and taking control of your life move more into the foreground. But it never entirely loses its flavor. It’s good enough that if it were a little better — a little quirkier, a little more urgent — there’d be nothing to complain about, and that’s pretty good.

Why Trump Must Be Removed and Disqualified From Public Office

www.nytimes.com - 4 months ago
The magnitude of the current crisis calls for two constitutional measures: the 25th Amendment and impeachment.
Read More

Ed Benguiat, a Master of Typography, Is Dead at 92

www.nytimes.com - 7 months ago
A noted graphic designer, he was an expert in typefaces, developing many himself and “fixing” others. His work adorns this newspaper.
Read More

www.nytimes.com - 4 months ago
The looming impeachment trial of President Trump in the Senate also presents a complication for Democrats hoping for a fast start in the Biden era.
Read More
More News & Articles