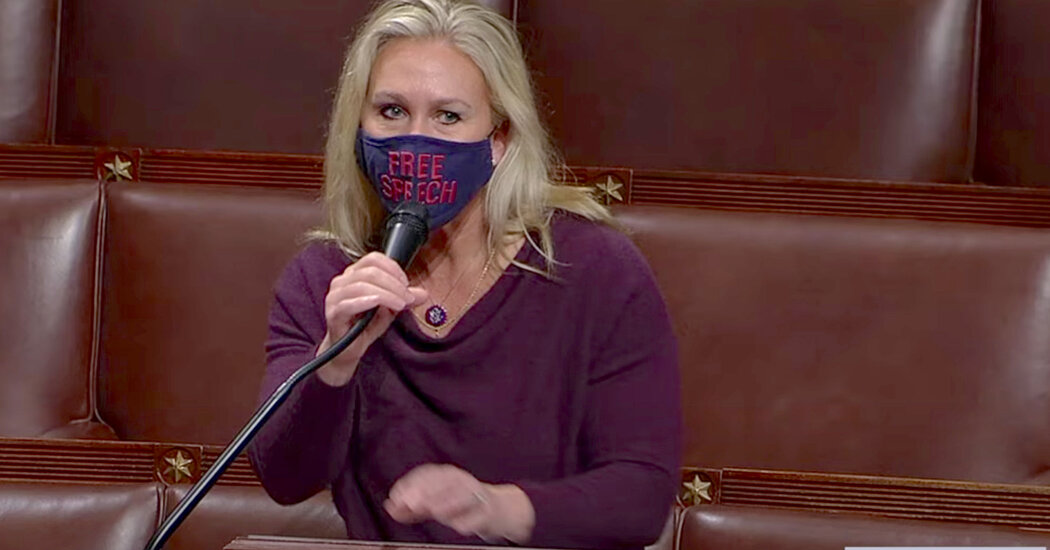 (Want to get this newsletter in your inbox? Here’s the sign-up.)

1. The House of Representatives voted to strip Marjorie Taylor Greene of her committee assignments for endorsing the executions of Democrats and spreading bigoted and false misinformation. It was a largely party-line vote, 230-199.

Democrats argued that the Georgia freshman’s comments — and the lack of action from Republican leaders — had forced them to take the extraordinary action. The revelations of her past media posts unsettled even some of her voters.

Ms. Greene, above, portrayed herself as regretful, saying that she now believed the Sept. 11 attacks “absolutely happened” and that school shootings were “absolutely real.”

Meanwhile, the Senate is in a “Vote-a-Rama,” a marathon session expected to stretch into the early-morning hours. Senators in both parties plan test votes to showcase their dueling priorities on a budget plan.

A central focus is Mr. Biden’s $1.9 trillion stimulus bill. Republican proposals include prohibiting relief checks for undocumented immigrants and an end to funding for schools that do not hold in-person classes once teachers are vaccinated. Senator Chuck Schumer, the majority leader, said Democrats would advance the budget once the Republican amendments had been defeated.

Nursing homes and long-term-care facilities that were struggling to retain employees even before the pandemic are now facing an existential staffing crisis.

And the stress of Covid-19 is broad. Sheetal Khedkar Rao, above, an internist in suburban Chicago, decided last year she could not continue practicing medicine. “After a while,” she said, “the emotional burden and moral injury become too much to bear.”

According to a congressional report, many baby foods are contaminated with heavy metals like arsenic, lead and cadmium at levels far higher than those allowed in bottled water. Exposure to heavy metals has been linked to behavioral impairments, brain damage and even death.

Representative Raja Krishnamoorthi, an Illinois Democrat who chaired of the panel that produced the report, said the failure of three companies to provide information “raises the concern that perhaps they have evidence of even higher metallic content in their baby foods, compared to their competitors.”

Over the past five years, the number of Americans who are “very worried” about climate change has more than doubled, according to researchers. But so has the number of people working to alleviate it.

“My overall goal is to help people feel less alone,” said Britt Wray, who writes a weekly newsletter on climate anxiety. “We need to restore ourselves so we don’t burn out and know how to be in this crisis for the long haul that it is.”

7. Disadvantaged Afghans are being fooled into joining militias.

The Afghan government, desperate to keep the resurgent Taliban at bay, has bankrolled a shadowy network of power brokers to recruit men of little means to guard territory, sometimes under the guise of offering them construction work.

Sayid Jawad, 27, above at his home in Mazar-i-Sharif, thought he had been hired to rebuild a government outpost destroyed by Taliban attacks. But then he was handed a Kalashnikov rifle and given a simple, radioed order: Fight or die.

The practice echoes the warlordism of years past and offers a disturbing warning of where the country’s future may lead as peace negotiations stall and a possible complete American withdrawal looms.

8. Should television reflect the world? Or distract us from it?

That’s the problem television writers face in deciding whether new seasons should include our Covid reality.

“Grey’s Anatomy” opted to embrace coronavirus story lines, even infecting its main character, above. “The Good Doctor” chose to split the difference by featuring the coronavirus early on before shooting forward in time.

“It would have been craziness to just ignore the pandemic,” said David Shore, the showrunner. “On the other hand, it also would have been exhausting for us and our viewers to walk through it for an entire season.”

Super Bowl LV this Sunday will face its own virus challenge: how to present a uniquely American spectacle at a time of misery.

9. Distillers across the U.S. are reviving a classic spirit.

Applejack was an everyday drink in 18th-century America, “the original moonshine of the colonies,” as our food reporter Julia Moskin writes. Some communities even used it as currency. But Prohibition dealt it a death blow.

Now, several new producers in apple-rich regions are reviving applejack, some using the traditional method of “jacking” — letting hard cider freeze and repeatedly skimming off the ice crystals at the top to concentrate the alcohol content to about 40 percent, or 80 proof.

10. And finally, wisdom from an internet prophet.

You may never have heard of Michael Goldhaber, but the former theoretical physicist saw the dominance of the internet coming in the 1980s.

He helped frame the idea of the “attention economy,” which has expanded, writes the Times Opinion columnist Charlie Warzel, to the point that “any discussion of power is now, ultimately, a conversation about attention and how we extract it, wield it, waste it, abuse it, sell it, lose it and profit from it.”

Now 78, Mr. Goldhaber sees examples ranging from the Trump presidency to the welter of influencers and news outlets that, surrounding Jan. 6, amplified increasingly dangerous conspiracy theories on platforms designed to encourage outrage: “It felt like an expression of a world in which everyone is desperately seeking their own audience and fracturing reality in the process.”

It’s only going to accelerate, he said, so why not practice a little more intent in allocating our attention?

Have a deliberate evening.

Your Evening Briefing is posted at 6 p.m. Eastern.

Want to catch up on past briefings? You can browse them here.

A 4-Day Workweek for 5 Days’ Pay? Unilever New Zealand Is the Latest to Try

www.nytimes.com - 5 months ago
“If we find that we’re all working the same number of hours as before but in four days, then we’ve missed the opportunity,” the company’s managing director said.
Read More

www.nytimes.com - 2 months ago
William J. Burns, a veteran diplomat, has vowed to rebuild morale at the C.I.A. after it deteriorated during the Trump administration and to intensify its spying on China.
Read More

But Is It Impeachable?

www.nytimes.com - 1 year ago
The House Judiciary Committee, in its first public impeachment hearing, went back to the basics of the Constitution.
Read More
More News & Articles