A dozen people were rescued after they became trapped in boats when the roof of a boat dock collapsed in Tennessee.
Author:
Published: 2021-02-18 01:21 pm 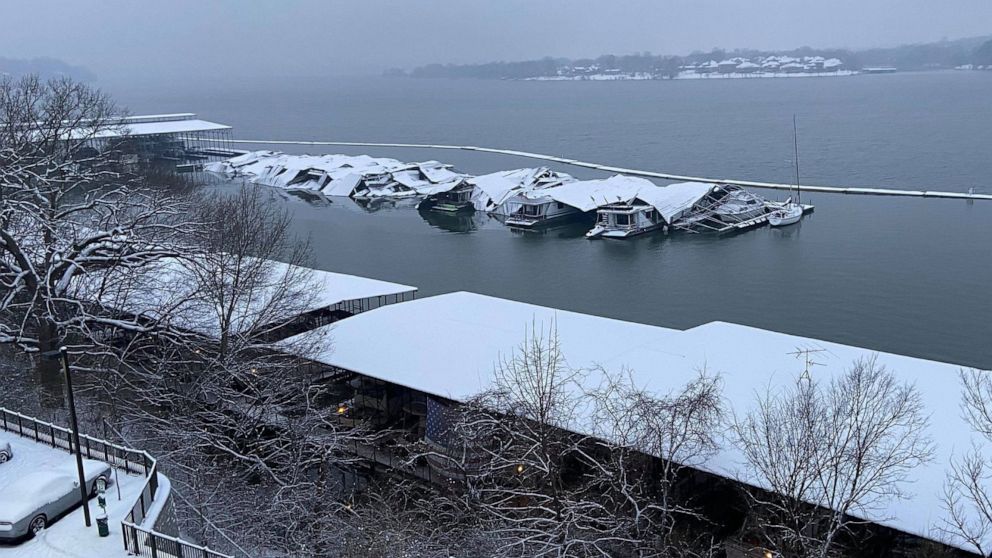 A dozen people were rescued after they became trapped in houseboats when the roof of a boat dock collapsed in Tennessee.

Rescue crews rushed to the Blue Turtle Bay Marina in Old Hickory, about 20 miles southwest of Nashville, on Wednesday night after receiving reports of several people trapped, according to the Nashville Fire Department.

When the fire department arrived, the 100-yard boat dock was in the frigid Cumberland River and inaccessible by foot, officials said. Once a water rescue was launched, 12 people were retrieved from several boats that were taking on water or already sinking.

The roof fell in as the South was being walloped with the second winter storm in one week, bringing snow and record cold to the region.

While the dock is designed to move along with the water, the snow and ice jammed up the mechanism, causing the dock to sink and eventually collapse, officials from the Nashville Fire Department told ABC Nashville affiliate WKRN.

Crews went boat to boat to make sure no one else was trapped inside, Nashville Fire Department Public Information Officer Kendra Loney told reporters at a press conference Wednesday night. No one was injured in the incident.

The fire department reminded the public that it is unsafe to operate a boat or vehicle in such inclement weather.

Turkey's economy shrinks by nearly 10% in Q2 during lockdown

abcnews.go.com - 8 months ago
Turkey’s economy contracted by 9.9 % in the second quarter of the year from the previous three-month period in the wake of lockdown measures put in place to deal with the coronavirus pandemic
Read More

abcnews.go.com - 3 months ago
Pope Francis has praised Colombia for its recent decision to grant protection to Venezuelans who have fled their homeland’s economic hardships
Read More

Ethiopia warns Tigray residents that 'anything can happen'

abcnews.go.com - 5 months ago
Ethiopia’s government is again warning residents of the besieged capital of the embattled Tigray region as the clock ticks on a 72-hour ultimatum before a military assault, saying “anything can happen.”
Read More
More News & Articles