Dogs are mysteriously turning blue and pink in Russian city 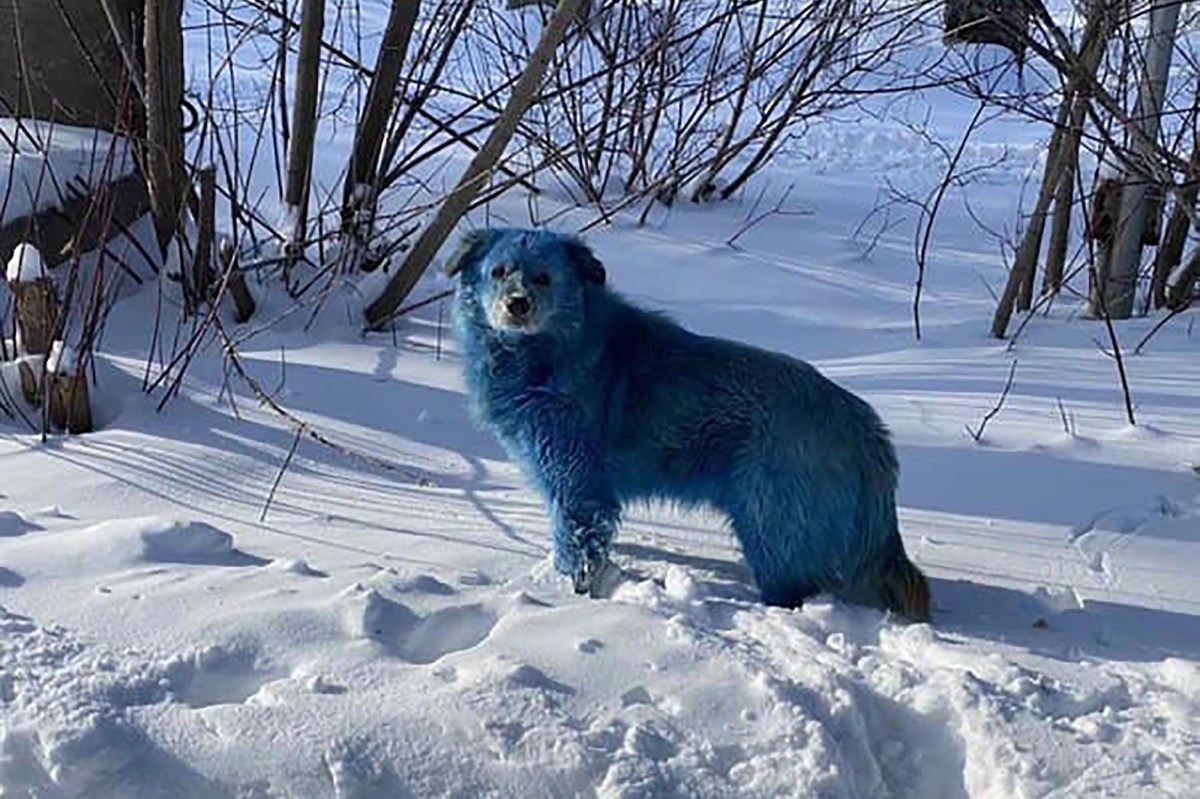 Packs of dogs in eastern Russia are inexplicably turning up pink and blue.

The bizarre phenomenon has occurred in and around the town of Dzerzhinsk, about 242 miles west of Moscow, near the abandoned Dzerzhinskoye Orgsteklo chemical plant that once manufactured highly toxic hydrocyanic acid, which is also a core ingredient in a once commonly used “Prussian blue” dye. Experts believe this detail may help explain why some pups are now blue through-and-through — including their excrement, according to vets.

Without clearer details, Dmitry Karelkin, head physician of Zoozashchita veterinary hospital, officially blamed the blue hue on “some kind of chemical,” which doesn’t appear to have harmed the animals physically.

(image)
Dogs in Dzerzhinsk, Russia, may be turning blue due to a chemical used in dye.

(image)
The dogs' excrement was also said to be blue.

(image)
Veterinary officials have claimed the effect does not appear to be toxic.

(image)
They remain under close observation.

Meanwhile, examiners from the Lobachevsky Research Institute of Chemistry at Nizhny Novgorod State University, as well as the Committee for State Veterinary Surveillance, found “no signs of irritating chemical burns,” while results from the blood and stool tests did not reveal significant toxicity.

(image)
The Dzerzhinskoye Orgsteklo plant is thought to be the source of the chemical dye that is causing some dogs to turn blue.

The blue dogs reportedly will remain under close observation for about 20 days. Meanwhile, no announcements have been made to specifically address pooches that are turning up pink, according to East2West news agency. However, some are calling for an investigation of a chemical dump in another area of Dzerzhinsk, where 300,000 tons of toxic waste was unloaded after the Cold War. The nearby Kristall defense plant was also implicated in local reports.

East2West has reported that city officials are calling the claims “exaggerated.”

The press can’t handle the truth and other commentary

nypost.com - 7 months ago
Media watch: The Press Can’t Handle the Truth “The corporate media has refused to cover the substance of the New York Post’s bombshell reporting” on Hunter Biden’s e-mails, observes The Federalist’s John Daniel Davidson, “not because there’s nothing to th
Read More

nypost.com - 3 months ago
The Rangers are currently ranked second-to-last for faceoffs in the NHL. Ahead of only the Devils, the Blueshirts have won a mere 41.8 percent from the dot through the first 10 games of the season. It’s been an area the Rangers have made a point to focus
Read More

nypost.com - 2 months ago
Tiger Woods could finally be nearing the end of his hospital stay, according to Rory McIlroy. Woods has been in the hospital since Feb. 23 after sustaining compound fractures in his leg from a single-car crash in southern California, but McIlroy has staye
Read More

nypost.com - 7 months ago
Judging from their grandstanding during Amy Coney Barrett’s confirmation hearing, Democrats think the composition of the Supreme Court is a big issue in next month’s presidential election. Yet evidently, it isn’t big enough for their candidates to clearly
Read More
More News & Articles