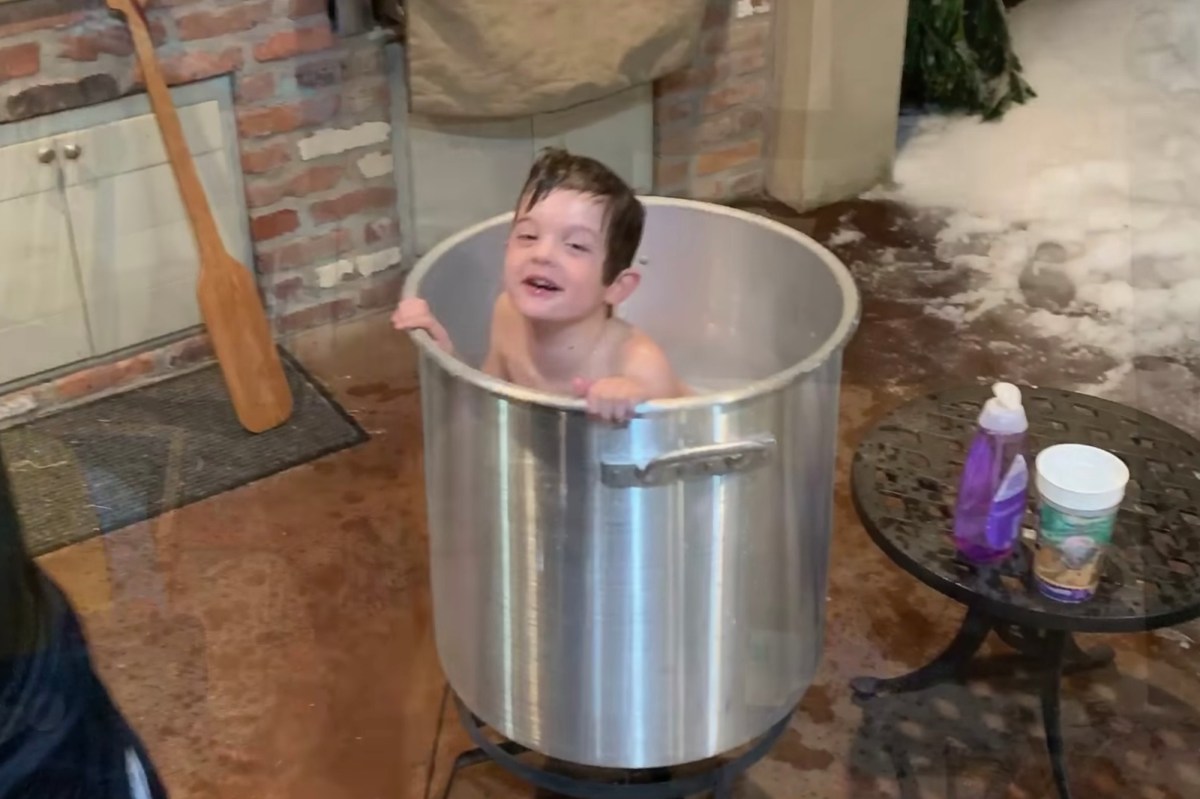 Despite significant damages following extreme winter weather, a family in Louisiana has managed to survive the storm by tossing their kids in a giant stockpot outside their home — for bathing, of course.

The Harper family has found themselves without water since Wednesday as rolling power outages caused by ice and snow have impacted local water-pumping stations in Shreveport, where Marie and Marshall live with their five young children. Marie, a pediatrician, told The Post it’s down to “a trickle” at the moment.

As a result, some locals have turned to harvesting snow in lieu of turning on the tap. Shreveport residents also remain under a boil advisory until Friday.

That’s where the family’s giant stockpot came in handy — for something other than boiling seafood.

“A very staple item for people to have around here is this giant crawfish pot,” said Marie, 36, who began using their boiler apparatus to warm large amounts of water for bathing and other uses. She said she and her husband, 38, were “bored and laughing” at the thought of dunking their small children in the pots for their daily baths.

(image)
Elise Harper, 6, taking her turn in the tub.

(image)
One of the Harpers' twin sons, John and Judson, 4.

“We did it to send [pictures] to our friends and family as a joke,” Marie told The Post. “To get them clean but also recognized it was kind of funny,” which prompted them to share the shots on social media.

“This is the most Louisiana thing I have ever seen,” one friend joked on the February 18 Facebook post, along with a video of the silly survival stunt.

Well-versed in how to boil liquids in giant stockpots, the daring parents didn’t need a thermometer to assure a safe temperature. They simply warmed the pot until the melted snow was “hot to the touch” then transferred the tub to a snowy surface to cool down the “scalding” bottom while four of their children, excluding their infant, took turns washing up.

“If they were inside, they’d be sharing baths anyway,” said Marie of the children, all of whom are no older than 6 years old.

Their après-ski-meets-crawfish-boil-inspired hot tub experience was discontinued after one night in favor of a more sauna-like setting — in the shower where the pot has since been relocated. “So the kids weren’t freezing their naked butts off” anymore, she said.

This is exactly why Giants’ Evan Engram is so polarizing

nypost.com - 1 year ago
This game showed why the Giants turned down offers for Evan Engram at the NFL trade deadline for the third straight year. This game showed why a frustrated segment of Giants fans want Engram to be dealt. Engram made a full-extension diving 16-yard
Read More

nypost.com - 1 year ago
Rev. John L. Jenkins hardly has been a strong advocate for COVID-19 safety protocols, even testing positive for the virus last month. But the University of Notre Dame president issued a stern letter Sunday to the student body, scolding them for storming
Read More

Lamarcus Joyner excited for change of position, scenery with Jets

nypost.com - 5 months ago
The best thing Lamarcus Joyner can say about his time with the Raiders is that it’s over.
Read More

nypost.com - 7 months ago
Police discovered Josue Bedell suffered a fatal gunshot wound after his family requested a wellness check when they couldn't get in touch with the 47-year-old Long Island man.
Read More
More News & Articles