“On Saturday, he posted photos of himself handing out bottled water with the hashtag ‘Texas strong.’ Sure, dude, we totally believe you,” Seth Meyers joked on Monday.
Author: Trish Bendix
Published: 2021-02-23 02:21 am 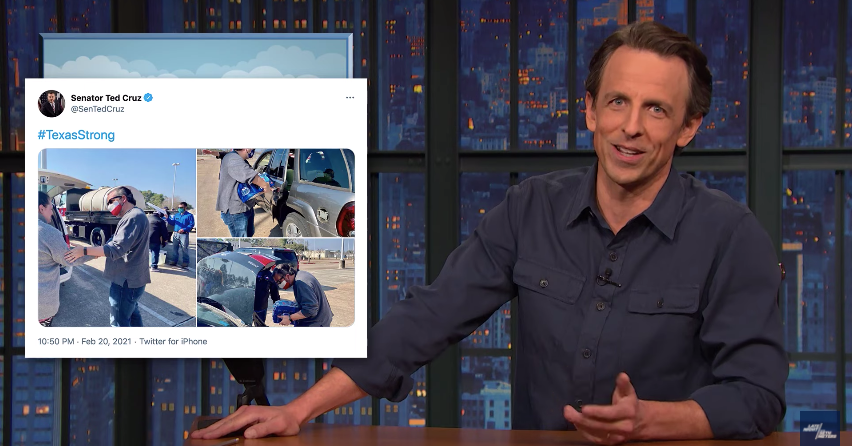 Welcome to Best of Late Night, a rundown of the previous night’s highlights that lets you sleep — and lets us get paid to watch comedy. We’re all stuck at home at the moment, so here are the 50 best movies on Netflix right now.

Most late-night hosts were off last week when Senator Ted Cruz of Texas took his untimely trip to Cancún, Mexico, after a brutal winter storm that left millions of people in the state without power or water. With the photo ops the senator staged back in Texas this weekend, there was even more Cruz content to work with.

“Ted Cruz is the husband who sits on his couch watching football all day, then sees his wife unloading a car full of groceries, waits until there’s one bag left in the trunk, then goes outside and says, ‘Oh, can I help?’” Seth Meyers joked on Monday.

“So now Ted Cruz is doing damage control after his estúpido trip to Mexico. He lent a helping hoof to those in need this weekend, and, of course, posted about it.” — JIMMY KIMMEL

“Then once he was shamed into coming back, Cruz tried to pretend he was actually interested in helping out. On Saturday, he posted photos of himself handing out bottled water with the hashtag ‘Texas strong.’ Sure, dude, we totally believe you.” — SETH MEYERS

“Ted Cruz is like the friend who offers to help you move, but every time you see him, he’s just carrying the same box of pillows.” — JIMMY FALLON

“People are also upset that Cruz tweeted those pictures himself. Even white people who only posted black squares on Instagram were like, ‘You gotta do more than that.’” — JIMMY FALLON

“But Cruz tried to be helpful in other ways. Later, he showed Texans how to make frozen margs with the snow in their living rooms.” — JIMMY FALLON

“Seriously, you know Cruz is having a rough 2021 when fueling a riot at the Capitol is nowhere near his biggest problem.” — JIMMY FALLON

“Things are so bad for Cruz, he spent today thinking about the good old days, when people just thought he was the Zodiac Killer.” — JIMMY FALLON

“Sorry, Cruz, this is not going to cut it, my man. See this right here? This is the politician version of coming home with flowers the day after Valentine’s Day. It’s not nothing, but your [expletive] is still sleeping on the couch.” — TREVOR NOAH

“Like many of Ted Cruz’s attempts to mimic human behavior, this one was Ted on arrival.” — JIMMY KIMMEL

“Only Ted Cruz would think he can repair his image by touching a maskless constituent two days after getting off an international flight.” — JIMMY KIMMEL

“Yeah, it seemed like an OK gesture until everyone noticed the label on the bottle said ‘Ritz Carlton Cancún.’ A little souvenir.” — JIMMY FALLON

“Yup, the photo op didn’t work out too well. Most people just drove away when he tried showing them his vacation photos.” — JIMMY FALLON

“Actually, Cruz wanted to do more, but he had a parasailing lesson at 3, so.” — JIMMY FALLON

The singer Billie Eilish will chat with Stephen Colbert on Tuesday’s “Late Show.”

Amy Poehler checks in before returning to (virtually) co-host the Golden Globes with Tina Fey this Sunday.

www.nytimes.com - 5 months ago
The pressure on his top administration officials to take action came as President Trump bristled at the restraints of his illness.
Read More

www.nytimes.com - 9 months ago
The decision comes amid criticism that the American military is harsher in dispensing punishment to African-American officers than to their white counterparts.
Read More

www.nytimes.com - 1 month ago
The app has helped fuel democracy movements in Iran and Belarus but now faces scrutiny as extremists and conspiracy theorists flock to it amid crackdowns by Facebook and Twitter on disinformation.
Read More