In Rush Limbaugh's home state, a flap over lowering flags

Even in death, the conservative radio broadcaster Rush Limbaugh is proving to be a divisive figure, as partisans in his home state of Florida debate over whether to lower flags in his honor
Author:
Published: 2021-02-23 10:22 am 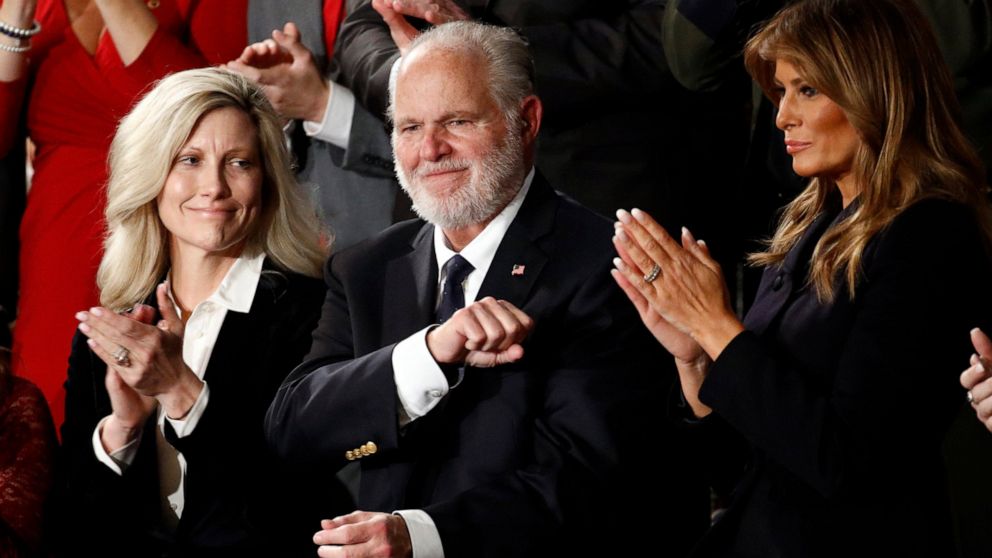 TALLAHASSEE, Fla. -- In life, the conservative radio host Rush Limbaugh was a divisive figure, who proudly waved the flag of conservatism and wallowed in the controversies he helped ignite. In death, those controversies follow him as partisans in his home state of Florida debate over whether to lower flags in his honor.

Gov. Ron DeSantis called Limbaugh a “legend” and ordered flags to be flown at half-staff as a show of respect after the longtime broadcaster, 70, died Wednesday of cancer.

But Democrats, who have long been on the receiving end of Limbaugh's harangues, objected.

Nikki Fried, Florida's agriculture commissioner and the only statewide Democratic officeholder, said Monday that she would not abide by the Republican governor's orders. Fried is considering a bid for governor.

“Lowering to half-staff the flag of the United States of America is a sacred honor that pays respect to fallen heroes and patriots,” she said in a statement. She said she would notify all state officers she oversees to disregard the governor's order.

Fried oversees about two dozen agricultural law enforcement inspection stations, more than three dozen state forests and nine regional licensing offices — all of which fly the flags of the United States and Florida.

“My concern is that the governor is bending over backwards to honor a radio host who has consistently made racist, polarizing and conspiracy comments,” Fried said in an interview Monday afternoon.

“It is really inappropriate,” she said of the flag lowering, “and the governor is playing politics with this American treasure, which is our flag.”

A year ago, President Donald Trump awarded Limbaugh the Presidential Medal of Freedom, the nation’s highest civilian honor, during his final State of the Union address.

The day before, Limbaugh had announced that he was battling advanced lung cancer.

Limbaugh had for decades championed conservativism — often stridently at the expense of liberals and Democrats.

Fried was not the only elected official to bemoan the governor's decision.

“Not lowering flags for Rush,” the mayor of St. Petersburg, Rick Kriseman, tweeted on Monday. “In St. Pete we don’t honor hatred, racism, bigotry, homophobia, or anything else he has spewed over the years. We are, however, honoring the life of Deputy Michael Magli of the Pinellas County Sheriff’s Office.”

Earlier in the day, DeSantis had ordered flags to fly at half-staff to pay tribute to Magli, who died last week after being struck by a vehicle while on duty in Pinellas County, home to St. Petersburg in the state's Tampa Bay region.

The governor’s office declined to elaborate on the state’s protocols for lowering flags.

Flags are typically lowered to honor prominent government officials, as well as law enforcement officers and members of the military killed in the line of duty. However, the governor also has the authority to lower the flags to commemorate tragedies, most recently the third anniversary of the Parkland high school shootings that took the lives of 17 students and staff members.

“When there’s things of this magnitude, once the date of interment for Rush is announced, we’re going to be lowering the flags to half-staff,” DeSantis said at a Friday news conference in Palm Beach County.

“Not much needs to be said,” the governor said. “He was an absolute legend. He was a friend of mine, and just a great person.”

Fried said she would not move to punish any of her managers who might follow her “strong guidance” and instead decide to comply with the governor's order.

“If somebody chooses to lower the flag, there are no penalties,” she said.

abcnews.go.com - 3 months ago
As Joe Biden pledges to unite a fractured nation, the incoming president faces deep divisions on the national front and widening fissures within the Democratic Party.
Read More

abcnews.go.com - 5 months ago
The United Arab Emirates has relaxed and removed a range of limits on foreign ownership of companies in the country’s latest bid to boost its global status and attract foreign investors
Read More

Law enforcement has 'delicate balance' at polls on election day

abcnews.go.com - 5 months ago
Law enforcement from New Jersey to California are working to ensure that Americans who show up at the polls have their voice heard and their vote counted.
Read More
More News & Articles