Skipper was born with two congenital defects and spina bifida in the middle of a treacherous storm — but that's not stopping her from "thriving," her owners told CBS News.
Author:
Published: 2021-02-24 05:38 pm 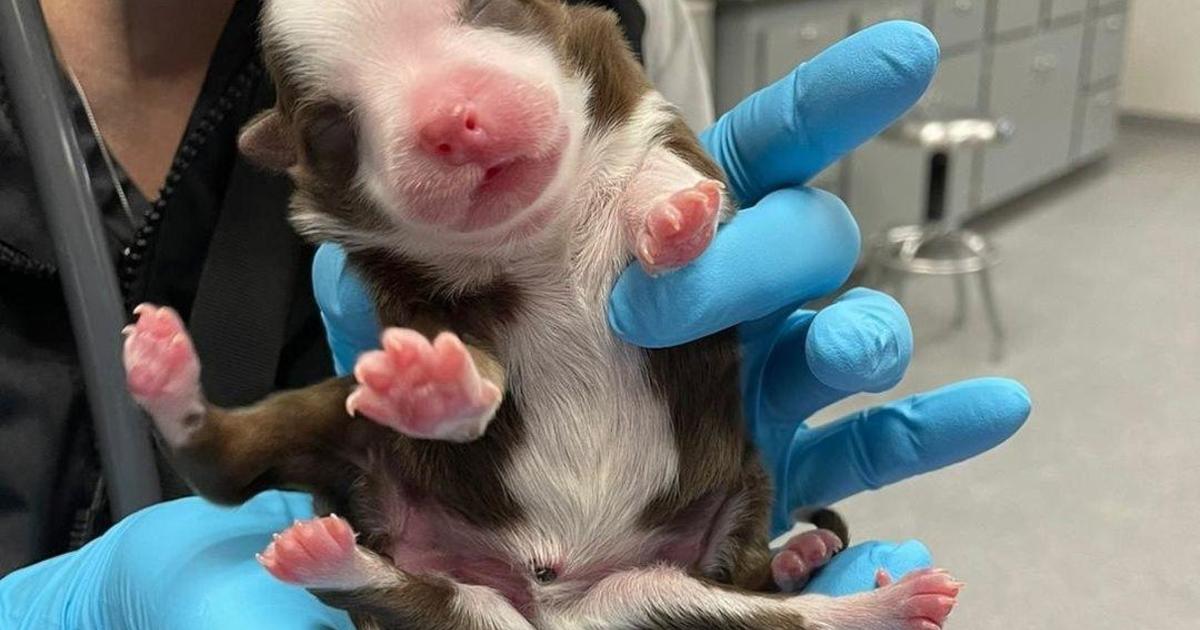 A puppy in Oklahoma is defying the odds at just one week old, according to an Oklahoma veterinary hospital. Not only was Skipper born during last week's record-breaking winter storm, but she was also born with extraordinary characteristics: Two tails and six legs.

"This is a miracle named Skipper," Neel Veterinary Hospital wrote on Facebook. "Literally."

The extra appendages are the result of two intertwining congenital birth defects, according to the Neel Veterinary Hospital, which has been caring for Skipper. According to the hospital, Skipper has monocephalus dipygus and monocephalus rachipagus dibrachius tetrapus, which results in her having a single head and chest cavity, but two pelvic regions, two lower urinary tracts, two reproductive systems, two tails and six legs. The defects, according to the hospital, may be the result of a twin that failed to separate while in utero.

The veterinarians said they suspect Skipper also has spina bifida, and said she may need physical therapy and mobility assistance as she ages.

Despite these challenges, the Veterinary Hospital says she is still acting much like a typical dog.

"Her organs appear to be in great shape, she is peeing and pooping, and is very strong!" the hospital wrote. "She nurses well and is growing appropriately so far. All of her legs move and respond to stimulus just like a normal puppy."

The hospital said Skipper's life may be historic, writing that it believes she has lived longer than any other canine that has been born with her combination of congenital conditions. While there have been other dogs born with six legs and other physical abnormalities, there does not appear to be any instances of dogs with monocephalus dipygus and monocephalus rachipagus dibrachius tetrapus being born alive.

According to a Facebook page named "Skipper's Journey," the Aussie and Collie mix is "doing great" and has been crawling around her owners' home. She was born in a litter of eight other puppies — and none of the others seem to have any abnormalities, the owners said. The owners told CBS News the puppy is "thriving."

Skipper's owners told CBS News that Skipper's mother rejected her when she was born, and that they took her in the next day. Since then, they said, it's been a "rollercoaster of emotions."

"We were definitely not expecting [her conditions]," they told CBS News. "We just want her to be happy and healthy."

Skipper is currently trying to open her eyes and ears and is also learning how to walk better and climb over obstacles, her family said.

"She is thriving and learning quickly..." the family said. "She is doing great."

Skipper was born on February 16 in Chickasha, Oklahoma, the day after Oklahoma and other states saw sub-freezing temperatures from a deadly winter storm. The day before Skipper's birth, the National Guard was activated in Oklahoma as temperatures plummeted to levels that hadn't been seen in more than century. Temperatures dropped below 20 degrees for five straight days, for only the third time in state history.

Tom Brady: "I played within the rules"

www.cbsnews.com - 2 weeks ago
NFL Patriots quarterback defended himself against claims that 11 of the 12 game balls were deflated during the AFC Championship game, saying he had no knowledge of any intentional manipulation. CBS Sports senior writer Will Brinson breaks down Brady’s
Read More

www.cbsnews.com - 6 months ago
President Trump on Wednesday held a rally in Duluth, Minnesota. One day after the first presidential debate, in which the president was criticized for repeatedly interrupting the moderator and opponent Joe Biden, Mr. Trump told rallygoers “The verdict is
Read More
More News & Articles