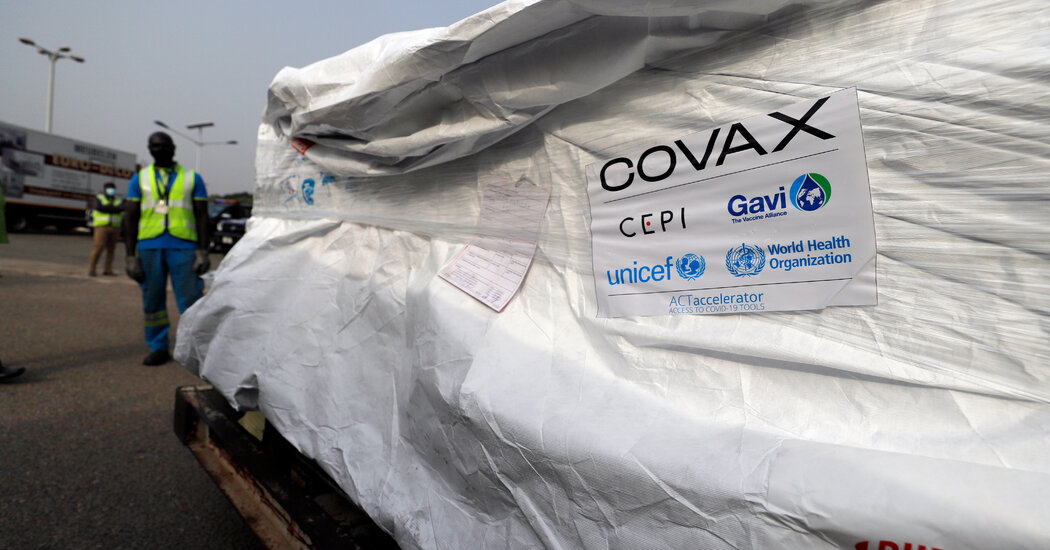 We’re covering a global vaccine drive that kicked off with a shipment to Ghana, Hong Kong’s efforts to rewrite history and Japanese animators living in poverty.

The West African nation of Ghana received 60,000 doses of Covid-19 vaccines, the first major shipment under Covax, a global sharing program that aims to deliver two billion free doses to 92 low- and middle-income countries this year.

Public health officials have criticized the unequal distribution of vaccines, with some wealthy nations having provided tens of millions of doses to their people while many poorer countries haven’t administered a single one. President Emmanuel Macron of France has called for Europe and the U.S. to send up to 5 percent of their vaccine supplies to developing nations.

Separately, new analyses found that Johnson & Johnson’s vaccine provides strong protection against severe Covid-19 and might reduce an infected person’s chance of spreading the virus. The Food and Drug Administration could authorize it for emergency use in the U.S. as early as Saturday.

A court in Germany convicted the former Syrian secret police officer Eyad al-Gharib on Wednesday of aiding and abetting crimes against humanity for his role in arresting and transporting protesters to an interrogation center known for torture nearly a decade ago.

The defendant, the first former Syrian official to be convicted of crimes against humanity, was sentenced to four and a half years in prison. Rights groups have hailed the case as a landmark in the effort to ensure punishment for atrocities during Syria’s civil war.

The conviction “is a message to all criminals who still commit the most horrific crimes in Syria that the time of impunity is over, and you will not find a safe place to go,” Anwar al-Bunni, a Syrian lawyer and activist, said in a statement.

Background: As the war nears its 10th anniversary, the country is marred by widespread destruction and sinking into a profound economic crisis, with poverty and hunger spreading. But President Bashar al-Assad remains in power, after his government used violence and torture to stamp out the uprising against him.

New curriculum guidelines unveiled by Hong Kong’s government have an ambitious aim: to use history to instill in the city’s youngest residents a deep affinity for, and loyalty to, mainland China.

The new lesson plans are part of a vast campaign to teach future generations a curated lesson about Hong Kong’s past. The effort also includes a $100 million project aimed at writing a 66-volume chronicle of the city.

Critics say the new curriculum guidelines are a misleading and dystopian campaign to shape young minds and turn history into pro-China propaganda.

Context: When antigovernment protests swept Hong Kong in 2019, pro-Beijing officials blamed the education system for promoting liberal values. Since then, Beijing has imposed a harsh security law on the city to quash dissent.

The global market for Japanese anime reached an estimated $24 billion by 2019, and the pandemic has only increased demand. But many of the workers who help create the shows make as little as $200 a month, and under taxing working conditions. Above, Tokyo’s Akihabara district, a center of anime culture.

Studios can pay low wages because so many young people are passionate about anime and want to work in the business. “There are a lot of artists out there who are amazing,” so the studios “have a lot of cannon fodder,” said a translator who works in the industry.

Tiger Woods: The golfer was “awake, responsive and recovering” after surgery for injuries to his right leg sustained in a single-car crash. He was said to have been driving at a “greater speed than normal” when the crash occurred on Tuesday.

Gender: Passports and other federal identification in the U.S. may soon include a third option, other than “male” or “female”: “X,” for nonbinary and intersex people.

Women in China: A divorce court ordered a man to pay his wife more than $7,700 in compensation for the housework she did during their marriage. The landmark decision prompted a fierce debate, with many saying the sum was inadequate.

Israel: A memoir by a daughter of Amos Oz, one of Israel’s most celebrated authors, who died in 2018, has shocked the country with its allegations of physical and emotional abuse. Other family members have defended him.

Snapshot: Above, the aftermath of a landslide in the Italian town of Camogli, which carried away a cemetery on the edge of a cliff, scattering coffins and bodies across the hillside and into the Mediterranean. Scuba divers have tried to retrieve the coffins from the sea.

Worldview: A new, double-sided map crafted by a cosmologist, a mathematician and an astrophysicist tries to present a less distorted perspective of the globe.

Quarantine diaries: Many air travelers around the world have found themselves enduring mundane stints of isolation in hotels because of government restrictions. Here’s what it’s like.

What we’re reading: This spellbinding feature from Defector about men’s college gymnastics. Read it even if you don’t follow the sport — it’s a master class in sportswriting.

Cook: This easy, crispy fried rice gets a lot of its brawny richness from just a small amount of bacon, while the cabbage lends sweetness.

Listen: Dawn Richard’s new song, “Bussifame,” and seven other tracks are on The Times’s pop playlist of the week.

Watch: The 2008 documentary “This Is the Life,” now streaming on Netflix, is a personal love letter to a slice of Los Angeles’s 1990s hip-hop scene.

Let us help you unwind. At Home has our full collection of ideas on what to read, cook, watch and do while staying safe at home.

The 1893 painting, held at the National Museum of Art, Architecture and Design in Norway, is among the world’s best-known works of art. But for years, it has held a mystery in the upper left corner of its frame: a tiny pencil inscription, reading: “Could only have been painted by a madman.”

Who wrote the sentence? Some thought a disgruntled viewer might have vandalized the work while it was in a gallery; others imagined it was the artist himself who had jotted the enigmatic sentence. But then why?

Curators at the museum announced Monday in Oslo that they had determined that the text was indeed written by the artist.

“It’s been examined now very carefully, letter by letter, and word by word, and it’s identical in every way to Munch’s handwriting,” said Mai Britt Guleng, the museum’s curator of old masters and modern paintings, who was in charge of the research. “So there is no more doubt.”

Munch painted four versions of “The Scream” from 1893 to 1910, depicting a skeletal figure on a bridge holding his face while screaming in agony. The first version, painted in tempera on panel with pastels, is the one owned by the National Museum, and it is the only one that bears this inscription.

That’s it for this briefing. See you tomorrow.

Thank you
To Theodore Kim and Jahaan Singh for the break from the news. Nina Siegal wrote today’s Back Story. You can reach the team at briefing@nytimes.com.

P.S.
• We’re listening to “The Daily.” Our latest episode is the second of two episodes on Covid-19 in New York’s nursing homes.
• Here’s our Mini Crossword, and a clue: Coffee additive (five letters). You can find all our puzzles here.
• Top executives at The Times are calling for more workplace diversity following a report based on interviews with more than 400 employees.

www.nytimes.com - 5 months ago
False claims in YouTube videos are still being shared widely. Some QAnon followers are struggling to keep the faith. Here’s the latest.
Read More

www.nytimes.com - 1 year ago
She is a forceful surrogate for Joe Biden’s campaign, in part because voters like that she has retained her own professional identity: “I admire how she’s always worked.”
Read More

www.nytimes.com - 5 months ago
“We remain in a very stressful time,” one economist said, as initial filings for state jobless benefits again exceeded 700,000 in a week.
Read More
More News & Articles