Members of a group supporting Myanmar's military junta have attacked and injured people protesting against the army’s Feb. 1 seizure of power that ousted the elected government of Aung San Suu Kyi
Author:
Published: 2021-02-25 03:39 am 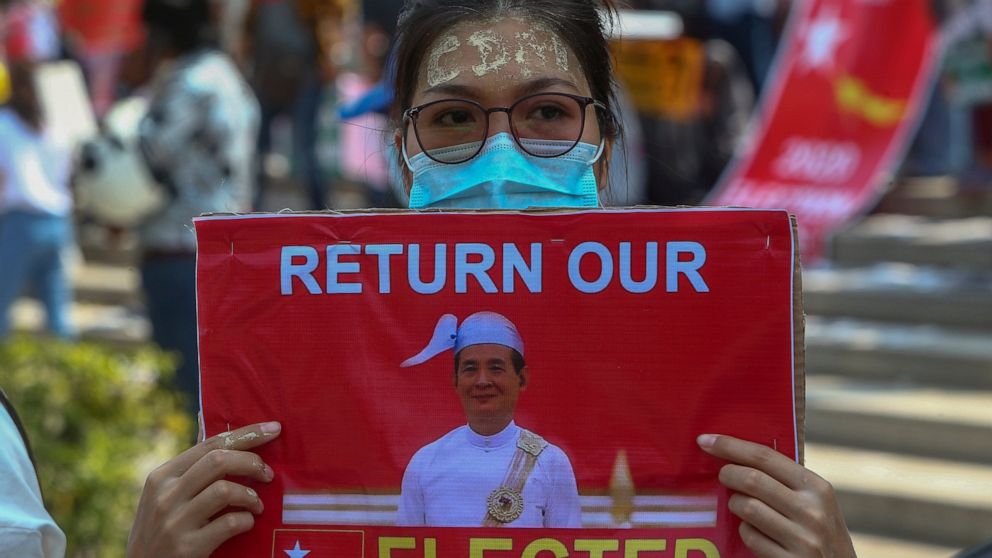 YANGON, Myanmar -- Members of a group supporting Myanmar’s military junta attacked and injured people protesting Thursday against the army’s Feb. 1 seizure of power that ousted the elected government of Aung San Suu Kyi. At least several people were injured in the attacks in Myanmar's largest city.

The chaos complicates an already intractable standoff between the military and a protest movement that has been staging large-scale demonstrations daily to have Suu Kyi’s government restored to power.

Fellow members of the Association of Southeast Asian Nations are urging Myanmar’s military to make some concessions to help ease tensions. The 10-country regional grouping views dialogue with the generals as a more effective method of achieving compromises than more confrontational methods, such as the sanctions often advocated by Western nations.

Photos and videos on social media showed the attacks and injured people in downtown Yangon as police stood by without intervening. The attackers fired slingshots and carried iron rods, knives and other sharp implements.

A widely-circulated video showed one man stabbed in front of an office building near a major downtown intersection on the road to Sule Pagoda, a major venue for anti-coup protests. The number of injured people and their condition could not immediately be learned.

According to accounts and photos posted on social media, the situation began with a march of hundreds of people in support of the coup. They carried banners in English with the slogans “We Stand With Our Defense Services” and “We Stand With State Administration Council,” which is the official name of the new junta.

English has been widely used for signs and posters and online memes by the anti-coup demonstrators in an evident effort to win international support.

Reports said the pro-military marchers were jeered by bystanders near the city’s Central Railway station and responded by firing slingshots, throwing stones at them and then chasing them down. Video shows pro- and anti-coup crowds at that location.

Supporters of the military have gathered in the streets before, especially in the days immediately before and after the coup, but had not used violence so openly.

Critics of the military charge its pays people to engage in violence, allegations that are hard to verify. But they were raised during earlier spells of unrest, including a failed anti-military uprising in 1988 and an ambush of Suu Kyi’s motorcade in a remote rural area in 2003, when she was seeking to rally her supporters against the military regime then in power.

Such confrontations jeopardize outside diplomatic efforts to help resolve Myanmar’s crisis through dialogue.

“We asked all parties to exercise restraint and not use violence . . . to avoid casualties and bloodshed,” Marsudi said in a virtual news conference after her return to Indonesia, emphasizing the need for dialogue, reconciliation and trust-building.

Marsudi said she had conveyed the same message to a group of elected members of Myanmar’s Parliament who have formed a self-styled alternative government after being barred by the military coup from taking their seats. The lawmakers are from Suu Kyi’s National League for Democracy party, which won a landslide victory in elections last November that would have given it a second five-year term in office.

Social media giant Facebook announced Thursday it was banning all accounts linked to Myanmar’s military as well as ads from military-controlled companies in the wake of the army’s seizure of power on Feb. 1.

It said in a statement that it was treating the post-coup situation in Myanmar as an “emergency,” explaining that the ban was precipitated by events since the coup, including “deadly violence.”

Facebook and other social media platforms came under enormous criticism in 2017 when right groups said they failed to act enough to stop hate speech against Myanmar’s Muslim Rohingya minority.

The army launched a brutal counterinsurgency operation that year that drove more than 700,000 Rohingya to to seek safety in neighboring Bangladesh, where they remain in refugee camps. Myanmar security forces burned down villages, killed civilians and engaged in mass rape, actions the World Court is investigating as constituting genocide.

The junta has tried to block Facebook and other social media platforms, but its efforts have proven ineffective. For more than a week it has also turned off access to the internet nightly from 1 a.m.

The military says it took power because last November’s election was marked by widespread voting irregularities, an assertion that was refuted by the state election commission, whose members have since been replaced by the ruling junta.

The junta has said it will rule for a year under a state of emergency and then hold fresh elections.

abcnews.go.com - 3 months ago
Austrian authorities have stopped a man at Vienna airport as he tried to smuggle 74 protected chameleons from Africa into the country
Read More

abcnews.go.com - 5 months ago
Austrian leaders are calling for more legal options to fight extremism and for an overhaul of the country’s domestic intelligence agency in the wake of this week’s deadly attack blamed on a known Islamic radical
Read More

abcnews.go.com - 1 month ago
Egyptian officials say a fire that erupted at a garment factory near the capital of Cairo has killed at least 20 people and injured 24
Read More

abcnews.go.com - 1 month ago
Prosecutors appear to be zeroing in on the leader of the Oath Keepers militia group for his alleged role in mobilizing followers to carry out the attack on the Capitol.
Read More
More News & Articles