He was one of NYC’s most celebrated pizzaiolos before the feds put him behind bars back in 1996. Today, infamous pie man Andrew Bellucci is back tossing dough in NYC — and swears he’s finally gone legit. “I’ve run away so many times,” Bellucci, 57, a pizz
Author: Suzy Weiss
Published: 2021-02-25 05:42 am 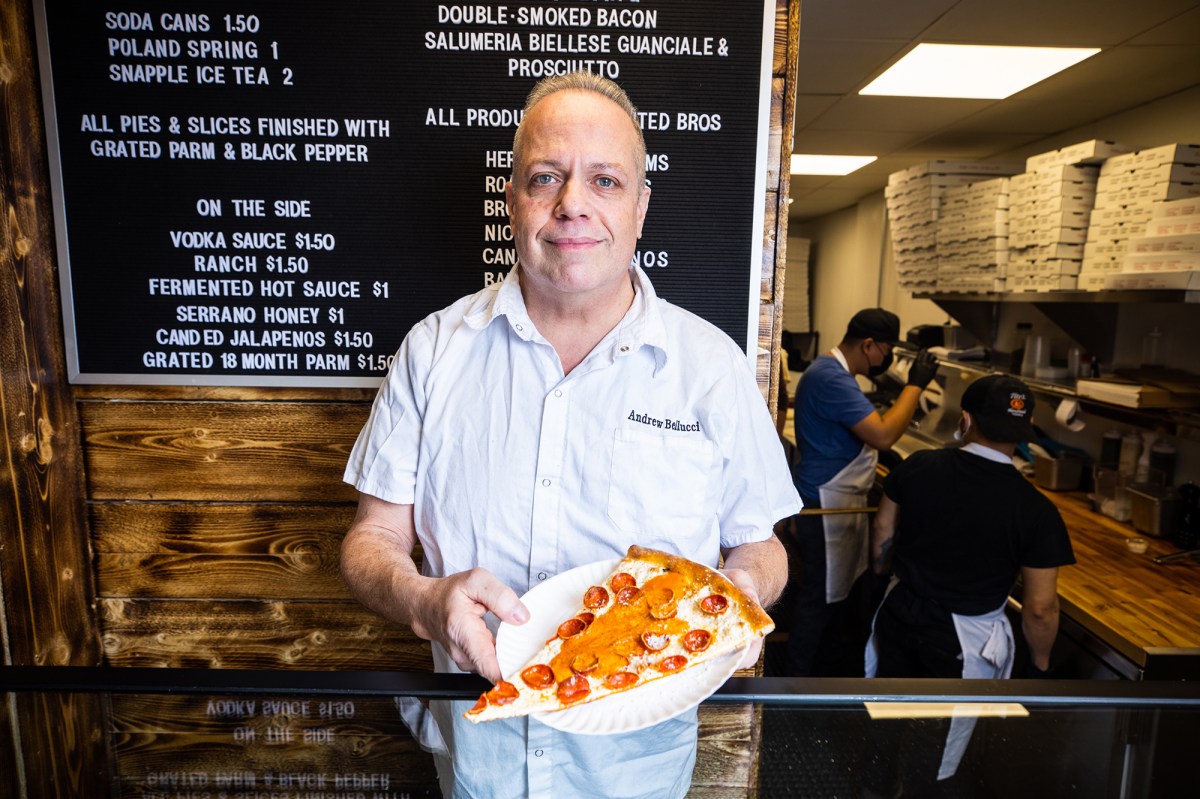 He was one of NYC’s most celebrated pizzaiolos before the feds put him behind bars back in 1996.

“I’ve run away so many times,” Bellucci, 57, a pizza chef who exploded onto the culinary scene in the mid-1990s, told The Post. “I have to give New York one more shot.”

He’s speaking of his new slice joint, Bellucci Pizza, in Astoria. Its opening follows a decadeslong odyssey that took Bellucci from the venerable Lombardi’s in Soho to the Otisville Correctional Facility in upstate New York, to far-flung stints in Kuala Lumpur, Malaysia, Hawaii, Shanghai, Bangkok and Ann Arbor, Mich.

His long road to 30th Avenue is chronicled in part in a six-part series called “Untitled Pizza Movie,” made by filmmaker David Shapiro (“Keep the River on Your Right: A Modern Cannibal Tale,” “Missing People”) and set to premiere this Friday, Feb. 26, through Metrograph theater.

“Business has been really good,” said Bellucci from the basement of his 300-square-foot shop. Since the soft opening two months ago, he’s been serving up slices for $3.50, plus 12- and 18-inch pies ($12 to $30) of his classic New York-style pizza, as well as more decadent specialty pies.

It’s named after his former cellmate in Otisville, where Bellucci wound up after he embezzled hundreds of thousands of dollars from a law firm he once worked at in the ’80s.

John “Sonny” Franzese was an underboss of the Colombo crime family and a former Lombardi’s patron.

“They put me in with the Italian guys,” said Bellucci.

During his sentence, Bellucci was transferred to another facility in Allenwood, Pa., which was more like a scene from “Goodfellas” than it was hard time. “There were tennis courts,” said Bellucci. “And the guys were lamenting that the golf course was closed.”

The real punishment, he said, was being written off by the owners of Lombardi’s, and “that I brought shame upon my parents.”

“It was a horrible thing to do,” said Bellucci. “I think about it and it makes me sick to my stomach.”

In 1994, Bellucci wowed high-brow critics and amateur slice aficionados alike when he helped re-open Lombardi’s pizzeria on Spring Street. He was praised for his pies perfectly blistered from a coal-burning oven, sought after because it burns hotter than wood, producing what some say is a superior crust.

The following year, federal agents dropped by Lombardi’s for lunch, ordered a pie, then arrested Bellucci.

“They didn’t pay for it either,” Bellucci said of the feds’ order. “They owe me 20 bucks plus interest.”

Bellucci ultimately pled guilty to 54 counts of fraud and the Jersey City native was handed a 13-month sentence.

The restaurant community was in shock and the New York Times — which had previously lauded Bellucci’s pizza skills — published a story accusing him of fabricating parts of his background. He had not been born in the Bronx, as he had previously claimed, and he had exaggerated his role at Lombardi’s, the paper reported.

Ironically, it was Bellucci’s success that had led to his capture. Partners at Newman Schlau Fitch & Lane had recognized him from all the media attention he had received while helping open Lombardi’s.

While working as the office manager of the law firm in the late ’80s, he had forged partners’ signatures and fraudulently billed clients for extra hours.

He spent lavishly — once throwing a party on Christopher Street with a live band and even inviting his law-firm colleagues.

After he left the law firm in 1990, Bellucci jetted off to France for what he called a “reset,” thinking he got away with the heist. But his former employers were suspicious and had notified the feds.

In Europe, he worked at a few Michelin-starred joints — “I always wanted to cook professionally,” he said — and, upon his return to America, landed a spot as a sous-chef in the kitchen at Spring Street Restaurant.

“The owners wanted a late-night menu, including pizza, and the chef didn’t want anything to do with that,” said Bellucci. “So I found a mixer and started making pies.”

After that gig, he became the daytime pie man at Two Boots, followed by a stint at the Three of Cups. When he signed on to make pies at the revamped Lombardi’s on Spring Street, he was hitting his pizza stride.

Filmmaker Shapiro first met Bellucci in the ’90s at Lombardi’s, and the two remain friends. “I still remember how good that pie was,” said Shapiro, whose next project looks at Oprah’s Book Club. “This slice is better.”

After his release in 1997, Bellucci says he placed himself in a self-imposed “pizza exile.” He spent 16 years driving cabs in NYC before searching Craigslist for a gig as a pizza chef on a whim. “I was at the top, and then I wasn’t,” he says in the movie. “It was traumatic.”

In 2013, Bellucci teamed up with restaurateur Michael Helfman, who brought him to Kuala Lumpur, Malaysia, where he helped open three restaurants. In the film, he describes an “extremely challenging” period, and even recounts attempting suicide using Jack Daniel’s and Vicodin.

Luckily, rock bottom begot rebirth. Bellucci vowed then to get back to basics and re-dedicated himself to formulating the perfect slice.

He had a free-standing pizza oven built in his backyard in Kuala Lumpur, and began experimenting with the four pizza elements: dough, cheese, sauce and heat. He tinkered with wood, lump charcoal and coal as fuel sources.

He came back to New York and experimented with opening pop-up pizza restaurants, then headed back to Asia at the behest of the owner of Joe’s Pizza on Carmine Street.

“They were looking to do an expansion into China,” he said, but the plans fell apart on account of rising tariffs. “Cheese became 80 percent of their operating costs.”

In 2018, Bellucci was offered a new job as the executive chef at Rubirosa on Mulberry Street. The physically demanding gig only lasted a few months. “I couldn’t stand all day or go up and down the stairs,” he said.

A brief sojourn tossing pies in Bangkok, then Hawaii, where he says he lost 40 pounds by swearing off liquor, got Bellucci into what he called “pizza shape.” He went back to work for the owners of Joe’s, who were planning to open up in Ann Arbor, Mich., in fall 2019.

“I told myself that I would either do this or die trying,” said Bellucci of his last stand.

A big game at the University of Michigan proved to be Bellucci’s own playoff. “The day of the Michigan versus Michigan State game, I made over 500 pies. There was a 100-pie order for 7:30 a.m.,” he said. “I knew after that game, after not taking a break, and being on my feet for 12 hours, that I was back in the game.”

Bellucci was back in New York for spring break when COVID hit, shutting down Michigan’s in-person learning and Bellucci’s stream of hungry coeds. He toyed with heading to Tokyo for another foray into foreign pie-making, when “Untitled Pizza Movie” premiered at Sundance, inspiring the longtime dough-maker to give the New York pizza scene another try.

On Craigslist, he found a new partner, Leo Dakmak, to back him financially. “He got my vision and said he would follow me blindly,” said Bellucci. “I told him that was maybe the stupidest thing he would ever do.”

Dakmak handles the business side — “I’m the world’s worst businessman,” said Bellucci. “Leo does the accounting, the taxes, payroll” — so that Bellucci can do what he does best: make pizza.

His pies are cooked at 630 degrees in a $35,000 electric oven. His crust, he said, is “heavily influenced” by the baguette — “I wanted the chew, and crispness,” he said. Each slice is topped with 18-month aged pecorino Romano and freshly grated single-origin aranya black pepper, which Bellucci bought by the pound four months before his shop even opened to make it in time for the spice’s harvest in Kerala, India.

A few more Bellucci pizza edicts: He won’t serve pizza using dough that’s been proofed for less than 48 hours. He’s been known to shut off the lights and close shop if a pie is coming out too dry, or undercooked.

“He’s fired so many people, sometimes I’m afraid he’ll fire me,” joked Dakmak, who also owns a piercing store and a tattoo shop in Manhattan and added that business is “better than expected.”

But the perfectionist isn’t a stickler for sanctimonious New York food rules. He’s pro condiments and is bringing New Yorkers homemade “herb-forward” ranch dressing, an ode to the Midwesterners he served in Michigan, plus serrano honey and fermented hot sauce, which he makes himself.

“There’s always room for improvement,” he said. “I’m not happy with the chicken in the chicken-bacon-ranch slice.”

Meanwhile, the pizza veteran is already rustling up rivalries with his former employers. “Maybe I’ll open across the street,” he said of Lombardi’s on Spring Street. As for Joe’s, “I’m the opposite,” he said. “Joe’s wants to sell pizza to everyone.”

Rather, Bellucci sees himself in the same league as four-star restaurants such as Per Se and Eleven Madison Park.

“I have only one goal,” he said. “And it’s to become the first slice shop with a Michelin star.”

Australian woman discovers headache due to tapeworm larvae in brain

nypost.com - 7 months ago
A 25-year-old Australian woman was found to have tapeworm larvae in her brain -- after experiencing a headache for more than a week, researchers said.
Read More

Yankees impressed with this version of Matt Harvey

nypost.com - 1 month ago
SARASOTA, Fla. — The Yankees got their first glimpse of Matt Harvey’s latest comeback attempt Saturday night. If the former Met keeps pitching the way he did against the Yankees, they could see a lot more of him this season in the AL East. Harvey turned i
Read More

nypost.com - 1 month ago
With warmer days — and herd immunity — blissfully around the corner, it’s finally time for that long-awaited style upgrade. And nothing says “I’m ready to emerge from a full year of hibernation” like seasonal, trend-forward bags (remember those?!) and
Read More
More News & Articles