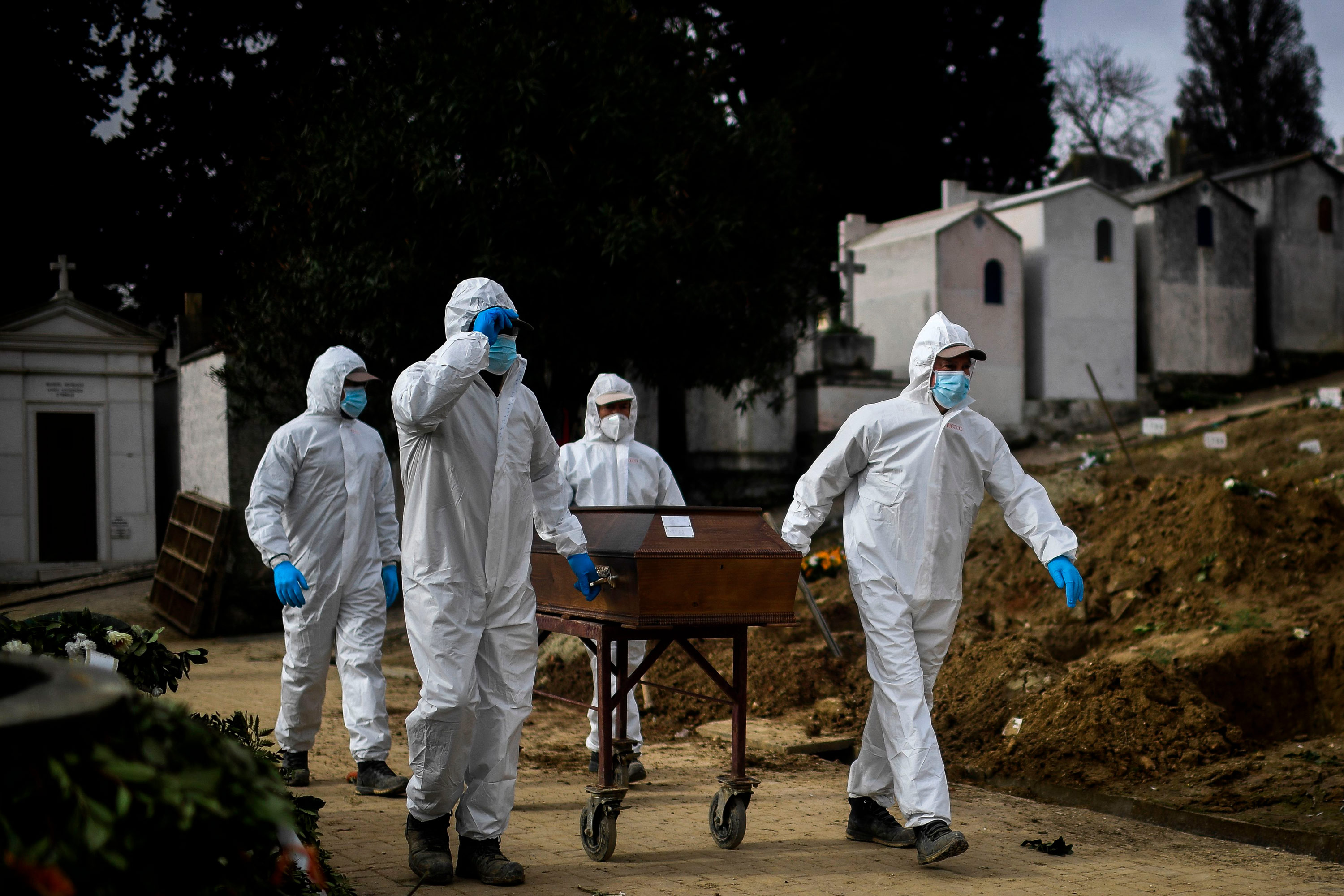 More than 2.5 million people across the world have died due to coronavirus.

At least 2,500,770 people have died since the beginning of the pandemic, according to Johns Hopkins University data.

The milestone of 2 million global Covid-19 deaths was recorded on Jan. 15.

The US leads with the most deaths followed by Brazil, Mexico, India and the UK.

On Feb. 22, the US surpassed the 500,00 total Covid-19 deaths mark, according to Johns Hopkins University.

At least 112,716,833 Covid-19 cases have been reported globally since the beginning of the pandemic, according to data from Johns Hopkins University.

Dubai plans to link the IT systems of its health authority with Emirates’ reservation and check-in systems, in order to facilitate the digital verification of air passengers' Covid-19 testing and vaccination data.

In a news release, Emirates said the project will allow for “the efficient sharing, storing and verification of passenger health information related to COVID-19 infection, testing and vaccination, all in a secure and legally compliant manner. The project will commence immediately, with the aim of bringing it to "live" implementation to benefit travellers in the coming months.”

AstraZeneca is "very confident" its Covid-19 vaccine yield will improve in the second quarter, noting that the company could even "catch up" to the supply volumes originally projected, company CEO Pascal Soriot said during an European Union virtual summit Thursday.

"As our teams learn from each other and improve their knowledge, the yield is increasing," Soriot said. "We are very confident that the year to increase across the network so that's one thing we are working very hard on is improving the yield."

"By Q2, we actually catch up to the volume that we had projected originally to produce. And those sites will be a variety of locations around the world, including the United States and some others," Soriot added.

The AstraZeneca CEO said yields have been lower than expected because some of the company's sites have been slow to ramp up production and because "manufacturing of a vaccine is a very complex biological process."

"I can tell you though that the overwhelming majority of what is manufactured in the EU, including the Netherlands facility, is actually going to be used in the EU supply," Soriot told EU officials during the summit.

"The numbers we are producing today are far from indicative of what we can produce in the future," Bancel said. "We expect that the additional capacity investment, which we announced yesterday to drive to up to 1.4 billion doses in 2022 will be helpful."

Bancel noted that some of the delays in Moderna's vaccine delivery are due to the company not having a stockpile of the vaccines, as they attempt to get every dose shipped to its destination country as quickly as possible.

"In the pandemic every dose is crucial, and we want that dose not to be in a factory or warehouse, but to be in somebody's arm," Bancel said. "So, the doses we make are shipped right away. We have no inventory, which means that any minor setback like a broken pump, or simple human mistake by one other operator can mean less doses produced that hour."

"European supply is one of Moderna’s biggest commitments to date. With this in mind we are constantly refining our processes in manufacturing, finding new efficiencies, and we continue to improve our speed. I am dedicated, as is my team, to delivering on this increasing the delivery commitment," Bancel said.

Bancel added that just yesterday, Moderna shipped the first phases of a trial product – aimed at combatting the coronavirus variant first identified in South Africa – to the US National Institutes of Health.

"As you all know, this is a variant of concern," Bancel said. "So we're very proud that this product has been shipped to start clinical trial very soon in humans."

There have been at least 28,338,150 cases of coronavirus in the US since the pandemic began and at least 506,121 people have died from Covid-19, according to Johns Hopkins University's tally of cases in the United States.

At least 88,669,035 vaccine doses have been distributed and at least 66,464,947 total doses of the vaccine have been administered, according to the US Centers for Disease Control and Prevention.

The totals include cases from all 50 states, the District of Columbia and other US territories, as well as repatriated cases.

You can see the latest Johns Hopkins University numbers here.

The European Union's goal is to vaccinate 70% of adults in each member state "by the summer," Europe's Health Commissioner Stella Kyriakides said during a virtual summit on Thursday.

“We are seeing more and more people being vaccinated every day and we are taking decisive action to increase the production, delivery and the rollout of vaccines across the EU. But we are also very aware that we need to vaccinate as quickly as possible," Kyriakides said.

“We set an overall target for member states that they should vaccinate a minimum of 70% of their adult population by the summer, it is an ambitious goal, but it is reachable," she added. “Predictability around the deliveries are essential though for an efficient rollout, and together with the member states we are really working 24/7 and doing everything we can to ensure that companies deliver on our agreements."

“We stand ready to update or to conclude new advanced purchase agreements and are working very closely with manufacturers to address any bottlenecks in production as they appear,” Kyriakides added.

Bahrain approved the use of Johnson & Johnson’s single-shot coronavirus vaccine, making it the fifth vaccine authorized for emergency use in the tiny Gulf nation, according to the Bahrain News Agency.

The vaccine will be available for the elderly, people with chronic diseases and other at-risk groups, the statement said.

“An in-depth study has been conducted on all documents provided by the producing company on the clinical results of the vaccine, in light of the studies conducted in many countries,” the statement added, quoting the head of the National Health Regulatory Authority Mariam Adhbi Al Jalahma.

The country of 1.6 million people had previously approved the AstraZeneca vaccine, the Pfizer/BioNTech vaccine, the Sinopharm vaccine and the Sputnik V vaccine.

Covid-19 cases in England have fallen 78% since the government imposed a national lockdown on Jan. 4, according to weekly statistics from the National Health Service Test and Trace.

Some 84,310 people tested positive for the virus between Feb. 11 and Feb. 17, the lowest weekly figure recorded since September.

Thursday’s figure was a large decrease from the 388,037 recorded between New Year’s Eve and Jan. 6, the week UK Prime Minister Boris Johnson imposed harsh measures to curb the spread of a more transmissible variant of Covid-19 first discovered in southeast England.

Johnson set out a four-step roadmap on Monday to take England out of its Covid-19 lockdown, declaring that the nation was on a "one-way road to freedom."

The UK has the highest Covid-19 death toll in Europe, with more than 120,000 fatalities, and remains under strict pandemic restrictions.

It has administered nearly 19 million first vaccine doses, with 642,788 fully vaccinated, according to data from John Hopkins University.

Guatemala's Health Ministry approved the emergency use of Russia's Sputnik V vaccine against Covid-19, according to a statement from the Russian Direct Investment Fund (RDIF) released Thursday.

Kirill Dmitriev, CEO of the RDIF said, “Guatemala is the third country of Central America to approve the use of Sputnik V," and the 37th country worldwide.

To date, Guatemala has registered at least 172,764 cases of Covid-19 with a death toll of 6,327, according to John Hopkins University.

Here's what was agreed on instead of witnesses

www.cnn.com - 2 weeks ago
In the beginning stages of Pennsylvania's high stakes Democratic Senate primary, even the most progressive of candidates are downplaying the label.
Read More

Trump could be discharged as early as Monday, physician says

Pandemic diaries: Why journaling now is the best time to start or restart

www.cnn.com - 4 months ago
You are living in an extraordinary time. So much is happening in the world, in your country, in your life. Making sense of it, processing, coping and even harnessing it to your benefit is important work. And writing in a personal journal is one of the mos
Read More
More News & Articles