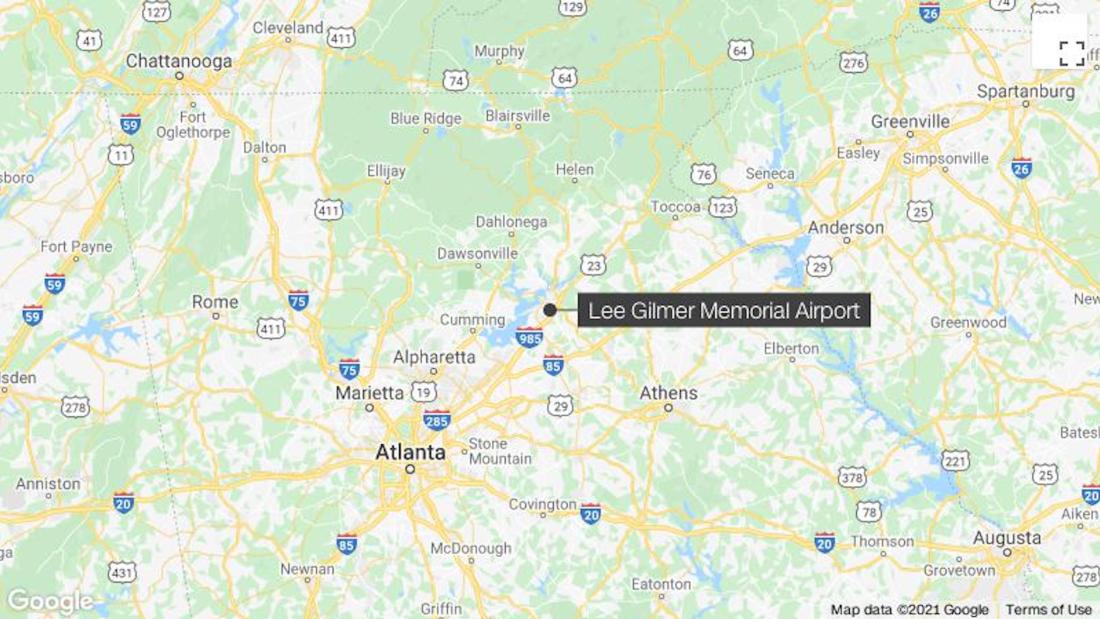 (CNN)Three people were killed Friday when their single-engine plane crashed into a ravine shortly after takeoff in Gainesville, Georgia, officials said.

The flight was headed to Daytona Beach, Florida, he said.

Gainesville is about 60 miles northeast of Atlanta and the county seat of Hall County.

The wing of the plane fell into the bedroom of a mobile home near the crash scene as the family living there ate their dinner, said Gainesville Fire Division Chief Keith Smith at a news conference.

"The occupants of the trailer were actually having dinner at the time when the wing came through their roof and landed in one of the bedrooms," Smith said. "Thankfully, no one was in the bedroom at the time."

A 911 call came in shortly after 6 p.m. from a passerby who noticed debris on the roadway and saw more plane debris when they looked into the wooded area across the street, according to Smith.

The debris field extends about a quarter to a half-mile, Brackett told CNN in an email. Brackett said that five people were displaced in the incident due to fuel falling on their home but were not injured.

Both the FAA and National Transportation Safety Board will investigate the crash, Duncan said.

www.cnn.com - 5 days ago
The safety committee of the European Medicines Agency (EMA) has found that the Oxford-AstraZeneca Covid-19 vaccine can cause unusual blood clots with low blood platelets, but stresses the overall benefits of the vaccine in preventing coronavirus outweigh
Read More

What history's bathing rituals reveal about status, purity and power

www.cnn.com - 2 months ago
In many parts of the world, cleansing one's body has become an individual, daily ritual -- a quick, steamy shower in the morning or a longer bath to unwind at night. But historically, our bathing habits have been imbued with deeper meanings.
Read More

House to attempt to override Trump's veto on defense bill

www.cnn.com - 3 months ago
The House of Representatives will vote Monday in an effort to override President Donald Trump's veto of the sweeping defense bill known as the National Defense Authorization Act, forcing GOP lawmakers to choose between loyalty to the President and
Read More

The pandemic has plunged some into poverty, and boosted savings for others

www.cnn.com - 4 months ago
For many Americans, the economic effects of the pandemic have been devastating. Millions have lost jobs. Food and housing insecurity has soared. And roughly half of US households reported a drop in income this year, according to Bankrate.com.
Read More
More News & Articles