The awards are often seen as precursors to the Oscars, but this year, the group that awards them is under increased scrutiny.
Author: The New York Times
Published: 2021-02-28 07:50 pm 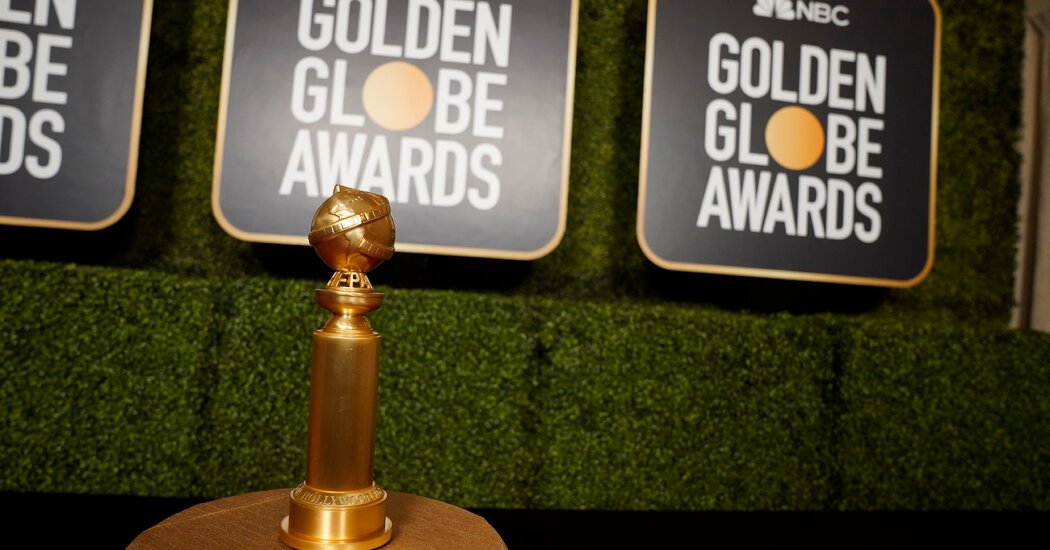 Because of the pandemic, the stars are far-flung this year, and the live audience for the Golden Globes is being made up of select front-line workers. We asked our reporter Cara Buckley, who formerly covered awards season, what the scene inside the Beverly Hilton is normally like. Here’s what she told us:

Being inside the ballroom at the Beverly Hilton is like going to celebrity zoo.

The famous people sit at tables toward the front near the stage, and people of diminishing importance are seated further toward the back. When the cameras are on, no one is supposed to mill around or be standing in the front area, but during commercial breaks, it’s like a stampede — people from hinterland tables basically gallop toward the stage area to fawn over celebrities until members of the production staff herd them out again when the show comes back on.

That’s part of the reason the Globes are more fun than the Academy Awards — people can actually move around, and go grab food and drinks, instead of being poured into Spanx and gowns and stuck in their seats for hours on end at the Oscars.

The Globes have a reputation for being quite boozy — celebrities are greeted with flutes of champagne the moment they step on the red carpet — but that bawdiness has diminished over the years as the television audience grew: It’s hard for anyone to cut loose knowing that there’s something like 18 million viewers watching them live. But off-camera and certainly at the afterparties, there’s dancing, imbibing, clandestine smoking and a sense of relief that the first big show of awards season is in the rearview mirror.

If the Golden Globes red carpet wasn’t exactly the red carpet we were used to, nor was it the dressed-down stars-in-their-jammies-pretending-to-be-just-like-us reveal that marked the celebrity-packed fund-raisers of the pandemic past. Instead, the first of the big award shows of 2021 gave us the hitherto before unimagined … home red carpet.

Turns out you can only keep the Hollywood-fashion industrial complex down for so long. But this time, the sight of stars in their finery in their social isolation seemed less like a mercenary marketing play (though there’s obviously still some of that) than a refusal to wallow and an understanding of the value of vicarious escapism.

As Laverne Cox said during the preshow segment as she posed in what she called “a standing Zoom” — the better to show off her frock — “we should have a moment.” And if not now, when? So she, and the rest of the nominees and presenters, proceeded to provide one.

Elle Fanning beamed in to show off a mint green silk charmeuse Gucci frock with elaborate diamanté straps, worn “to walk from the kitchen to the living room,” because — well, “why not?” Josh Charles showed off his Loewe-meets-Edward Scissorhands tux lapels from his hotel in London, flapping them at the camera with aplomb. Amanda Seyfried posed in a hallway wearing crimson floor-length Oscar de la Renta with a built-in stole of fabric flowers draped around her shoulders.

And thus the human desire to get dressed up was the first winner of the night.

The Hollywood Foreign Press Association, the group that puts on the Golden Globes, has long been widely viewed as colorful, if not necessarily journalistically productive. But this year, in the run-up to the awards, a recently filed lawsuit, a review of financial records and a series of interviews all put the organization under an unusual amount of outside scrutiny.

Courting the favors of the group’s members — there are only 87 — has become a ritualized Tinseltown pursuit. A Golden Globe nomination, and certainly a win, is a publicity boon that can boost careers, jack up box office earnings and foreshadow an Academy Award. So studios, production companies, strategists and publicists feverishly chase members’ votes.

In 2018, NBC agreed to pay $60 million a year for broadcast rights, about triple the previous licensing fee. In the tax year ending in June 2019, the tax-exempt nonprofit was sitting on about $55 million in cash, donated about $5 million to assorted causes and paid more than $3 million in salaries and other compensation to members and staff. (Being on the association’s TV Viewing Committee, for instance, paid members $3,465 a month, internal reports showed.)

A recent investigation by The Los Angeles Times found, among other things, that the group has no Black members — a problem the group subsequently acknowledged and vowed to remediate.

Some of the renewed attention came in the wake of a lawsuit brought by Kjersti Flaa, a Norwegian reporter who has thrice been denied admittance to the group, who alleged that the association acted as a monopoly, hogging prized interviews.

A judge threw out the majority of the lawsuit filed against the association, but the plaintiff has amended it and refiled. Gregory Goeckner, the organization’s chief operating officer and general counsel, described the allegations in the suit as “salacious.” And he said the association only remunerates members when they do extra work.

Meanwhile, the Golden Globes go on.

“It’s a big-tent network television show, and as such, invaluable to film campaigns hoping to contend for Oscar nominations and wins,” said Tony Angellotti, a publicist who runs awards campaigns, in an email. “And the H.F.P.A. track record for identifying worthy films is indisputable. That’s not nothing.”

The Hollywood Foreign Press Association, which puts on the Golden Globes, likes to bestow its trophies on films that already have plenty of Oscar momentum, but the small size of the group — around 90 eccentric journalists who vote — leaves every category open to a shock winner.

Then there’s the fact that the H.F.P.A. is also under fire after a raft of recent articles exposed double-dealing practices and an insular membership. There are no Black voters, and that may explain the absence of any of the acclaimed Black-led ensembles like “Da 5 Bloods” and “One Night in Miami” from the best drama nominations.

Will voters respond to the controversies by picking a diverse set of worthy winners, or will the usual Globes anarchy prevail? We asked our awards expert, Kyle Buchanan, and he said he expected a bit of both. Here’s what else he predicted:

— The drama races are tougher to call. “The Trial of the Chicago 7” and “Nomadland” will battle it out for best motion picture, drama, with the edge going to the courtroom tale. For best actress in a drama, Carey Mulligan (“Promising Young Woman”) may pull out the victory over Frances McDormand (“Nomadland”).

— But when it comes to best actor in a drama, Chadwick Boseman, nominated for his final performance, in “Ma Rainey’s Black Bottom,” is as close to a lock as there is. He’s the front-runner for the Oscars, too.

When the 78th annual Golden Globes are handed out on Sunday, they will be the first major awards show of the season, coming nearly two months after we would typically find out the best picture winner.

On television, NBC is the official broadcaster. Online, if you have a cable login, you can watch via NBC.com/live. Depending on where you live, there’s also Hulu + Live TV, Sling TV, AT&T TV Now, YouTube TV or FuboTV, which all require subscriptions, though many are offering free trials.

www.nytimes.com - 7 months ago
The Oregon governor declared an emergency in advance of the event hosted by a right-wing group with a history of violence at protests. Local Black activists planned an event nearby.
Read More

www.nytimes.com - 7 months ago
A ladder truck rushing to a fire slammed into an ambulance carrying a man who had suffered a heart attack, killing him and injuring 11 others.
Read More

Pete Buttigieg Responds to Uproar Over Past Comments on Minority Students

www.nytimes.com - 1 year ago
Michael Harriot, who wrote a scathing essay about Mr. Buttigieg in The Root, said his goal was to point out that “the ignoring and whitewashing of the issues, and trying to remain appealing to moderate voters, does a disservice to the Democratic Party’s
Read More

Jewell Loyd Is in the Gym, Building Her Game and a Community

www.nytimes.com - 1 month ago
A trying year, on and off the court, helped Loyd finally embrace herself as an elite Black female athlete.
Read More
More News & Articles