Who needs another center? The Knicks have Nerlens Noel. Mitchell Robinson has a broken hand. Backup center Taj Gibson was back in New York with a sprained ankle. Knicks coach Tom Thibodeau faced the Pistons on Sunday with one healthy center and it was
Author: Marc Berman
Published: 2021-03-01 12:51 am 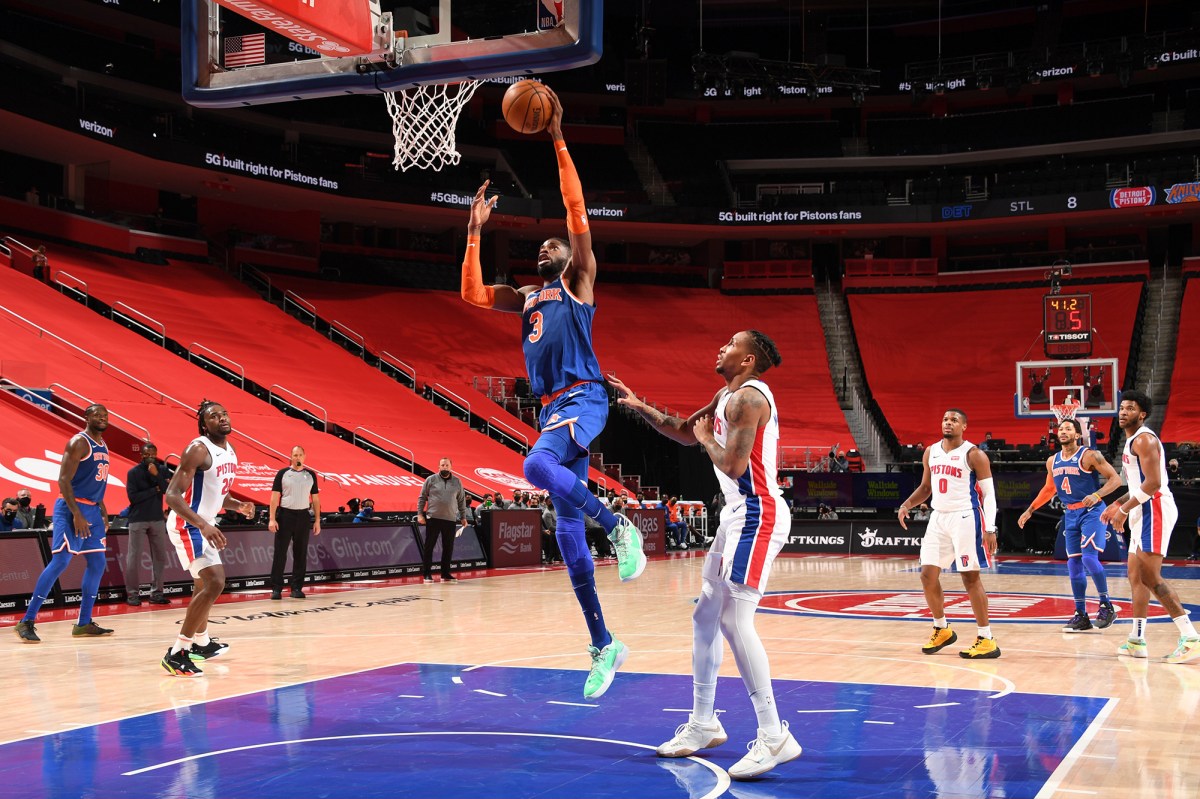 Who needs another center? The Knicks have Nerlens Noel.

Mitchell Robinson has a broken hand. Backup center Taj Gibson was back in New York with a sprained ankle and could be out awhile.

Coach Tom Thibodeau faced the Pistons on Sunday with one healthy center. And it was more than enough.

The Knicks didn’t die when Robinson went down and Noel became the starter. In fact they have thrived, building a 6-2 record.

Just ask Detroit rookie Saddiq Bey if the Knicks need to upgrade the center position after he got humiliated by Noel on a driving stuff attempt that got rejected soundly.

“If you don’t know, you’re going to find out,’’ Noel said about his message for penetrators to the rack. “I’m protecting the rim by any means. It’s a great aspect to my game I try to play at a high level. Just do enough to change the game. Just come in and find out.’’’

Knicks president Leon Rose doesn’t seem ready to add another center quite yet. Not with Noel playing this well.

“I definitely don’t want anyone hurt on this team,’’ Noel said. “But I’ve taken that spot and made a focal point to man this team and be the anchor on the defensive end and do the small little things to help us win. I think I’ve been at a high level.’’

If Noel’s knees hold up, the Knicks should be OK. The Post has reported team brass is “analyzing’’ whether a move for the available Andre Drummond makes sense.

Center DeMarcus Cousins, whose stock is low, is still a free agent after being unceremoniously waived by Houston.

“That’s a Leon question,’’ Thibodeau said before the game. “We have more than enough on the roster so we’ll figure out a way. We have guys that can play multiple positions and then we’re going to have to take care of the rebounding, gang rebound. Everyone has to contribute in that area.’’

Knicks general manager Scott Perry has been on a G-League mission presumably looking at center pieces. If the Knicks signed a free agent center they’d have to cut a player to make room.

One team in contact with the Knicks said they want to hold down the fort with what they have for now.

Gibson’s ankle sprain could be serious but the Knicks can also play small-ball. Sunday, they briefly used roookie Obi Toppin at power forward and Julius Randle at center.

Thibodeau finally used a different small-ball lineup Saturday he had been considering with Kevin Knox at power forward and Randle at center but didn’t need it in routing Detroit. Hence, Thibodeau played just a nine-man rotation.

Combo guard Austin Rivers traveled with the team to Detroit for Sunday’s game and was on the bench. The Post reported Rivers never appeared on the Knicks’ bench during Saturday’s win.

A Knicks official said he was getting treatment for an ankle injury but was available to play if need be. He’s been taken out of the rotation the past month after the Derrick Rose trade. Then in another slight, Frank Ntilikina was placed into the rotation when Elfrid Payton went down with a hamstring strain. Payton missed his third straight game Sunday. Rivers said last week he feels he could be dealt.

Dennis Smith Jr. scored seven points with four assists, seven rebounds and three steals in his first game against the Knicks since the Super Bowl Sunday trade. But he shot just 3 of 11. The new Pistons starting point guard will be back at the Garden Thursday. … The Knicks were 13 of 26 from 3-point land (50 percent).

nypost.com - 3 months ago
This French wine is truly out of this world. The SpaceX capsule will bring a case of Bordeaux back to Earth when it splashes down Wednesday — and it’s no vin ordinaire after aging in outer space for more than a year. The intoxicating cargo was shipped to
Read More

nypost.com - 6 months ago
Joe Tsai committed $6 million to pay his Barclays Center workers through June, and now he will cover them through the rest of 2020, The Post confirmed. The decision by Tsai, first reported by The Atlantic Yards Report, could cost the billionaire — who own
Read More

nypost.com - 2 months ago
Fernando Tatis Jr. and the San Diego Padres have agreed to a 14-year, $340 million deal on Wednesday, The Post’s Joel Sherman confirmed. The 22-year-old shortstop has a .301 average to go along with 111 hits, 39 homers and 98 RBIs in his two seasons with
Read More

nypost.com - 6 months ago
The Lakers were just seconds away from an NBA title, confetti machines at the ready courtside. Then Jimmy Butler and the Heat ripped that celebration away from them. The pain was written on the Lakers’ faces as they trudged off the court in Disney World.
Read More
More News & Articles