Mississippi residents without water for more than 2 weeks after storm

Mayor Chokwe Lumumba didn't give a timeline for when water would be completely restored, but called the storm an "act of God."
Author:
Published: 2021-03-01 04:45 pm 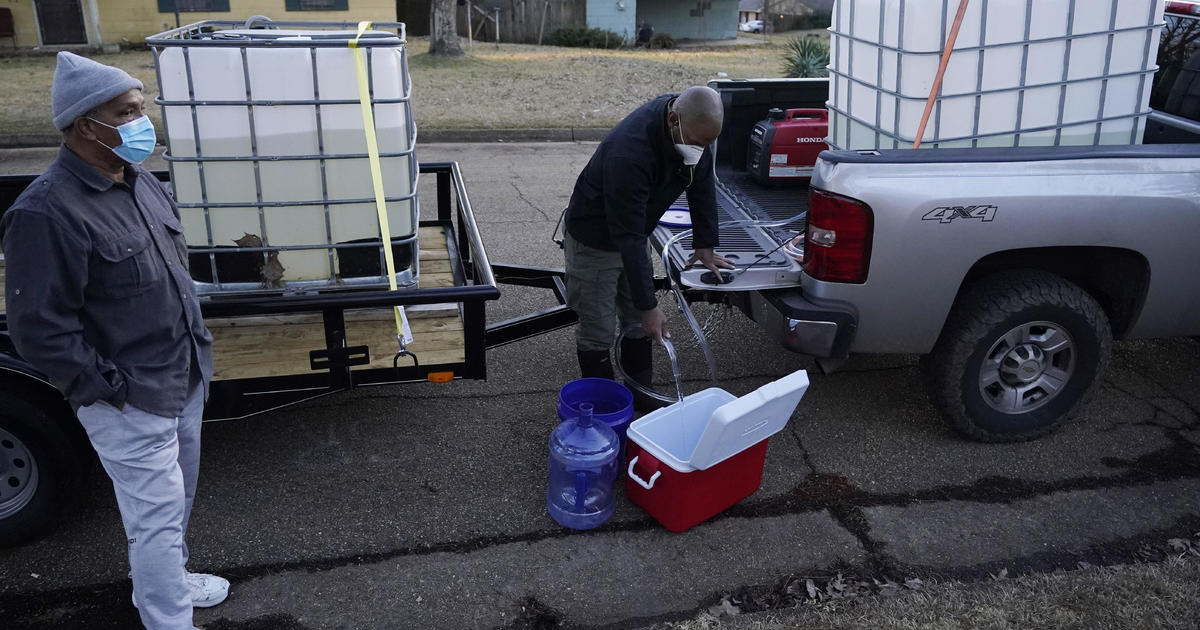 Winter storms that passed through the South last month caused long-term damage in several states, with millions in Texas without power and water for days. While the focus was on the Lone Star State, Jackson, Mississippi continues to suffer from storm-related issues as well.

In anticipation of a storm on February 14, Mississippi Governor Reeves and Lieutenant Governor Delbert Hosemann declared a state of emergency. The storm left thousands in the state without power, which has since been nearly fully restored.

However, Jackson is still feeling the effects of the storm, with a boil water notice still in place, more than two weeks after the snowstorm. Reeves also activated the National Guard to help with water distribution efforts in the area. And the city has set up several sites for distribution of non-potable or flushing water this week.

"Over the course of this crisis, 80 total water main breaks/ leaks have been reported throughout the City," according to a press release from the city. As of Sunday evening, 51 repairs had been completed by the Water Maintenance Department, which was continuing to work on repairs.

In addition to boiling water during the crisis, residents are also being asked to limit their usage of water. A representative for the city of Jackson told CBS News that it is unclear how many people were without water, as the system — which services 43,000 customers — is old. The way the city counts and records water outages is by people calling them in.

In a press conference about the city's water supply on Sunday, Mayor Chokwe Lumumba said the lack of water is an issue of health and sanitation. "We have seen several areas that have been without water that are starting to see water, but we are certainly nowhere near ready to claim victory until every single resident has the restoration of their water," Lumumba said.

City engineer Dr. Charles Williams said Sunday was a "much better day" than the previous one. "The complex nature of it is, our system crashed, like a computer, and now we're trying to rebuild it," he said. "And so, the progress has been very slow."

"I know residents are trying to understand this process and be patient — they just want to see water," Lumumba said. "I think it's important to start with the understanding that what we have faced and what we have seen as a result of the winter storm, water treatment facilities are not meant to shut down at the level that we experienced."

Lumumba said because the water facilities shut down, "the process of getting it moving back to where it was before the storm is a difficult recovery process." The mayor also said that Jackson is a "legacy city" and it needs long-term support to deal with the water issue "that has gone decades without being addressed sufficiently."

He said Jackson is an "aging city with an aging budget" with about a $300 million annual budget and "more than likely, a more than $2 billion issue with our infrastructure." He did not specify a timeline for when water would be restored. CBS News has reached out to Lumumba, Williams and the city's council and public works department for statement or comment and is awaiting response.

Last week, city council member Kenny Stokes criticized Lumumba's response to the storms, saying during a news conference on Wednesday that the "City of Jackson has suffered unduly because of the rookie mistakes of the mayor."

This came after Lumumba said during a city council meeting a week ago that Stokes spread misinformation about the relief efforts following the storm.

Lumumba also defended his administration's response to the crisis during a press conference Tuesday: "We offer as proof of the fact that this is an act of God is you just simply have to look at all of the places that this weather affected, and the fact that communities are experiencing the same trauma that our residents are experiencing today — Houston, Texas, Austin, Texas Canton, Mississippi, Vicksburg, Shreveport, Louisiana, and many more.

"It was an act of God, extreme weather, that sent old systems into havoc and put our residents in trauma," Lumumba said. "In moments of crisis, the first casualty is trust, which is why I'm calling up not only the media, but our council people." He then said "misinformation" had been spread.

CBS News has reached out to Lumumba and Stokes for comment on this and is awaiting response.

While city officials argued in the press, Jackson residents and many others posted their frustrations with the situation on social media. "Trying not to complain but this is so wild. Tomorrow will be the beginning of the third week that I and so many others in Jackson have been without water. I'm not blaming anybody because these problems pre-date our leadership," Arekia S. Bennett, a teacher and director of Mississippi Votes, tweeted.

Bennett also shared a link to the non-profit Shower Power, a mobile shower unit brought to cities in need. Shower Power will be in Jackson to provide clean showers to people without water.

"The entire city of Jackson, Mississippi, either has no water or is under a boil water alert. It's been 2 weeks now, going on week 3. Why isn't this getting the attention Texas got?" another resident tweeted.

Activist Erin Brockovich also tweeted about the water issues: "Big money but bad or no water!! Jackson, Mississippi, has been without water for a week."

"Not only was the city's water treatment plant knocked offline but the governor has dispatched the National Guard to bring water to the city's 160,000 residents," she wrote.

"How is it that the people of a state's capital city in the richest nation on earth have been without running water for two weeks now? How is it that there are no ongoing conversations between Mississippi's governor/legislature and Jackson's mayor? Jackson is 82% Black," Ashton Pittman, senior reporter for the Mississippi Free Press, tweeted.

www.cbsnews.com - 11 months ago
The doughnut-shaped galaxy produces stars at a rate 50 times faster than the Milky Way.
Read More

www.cbsnews.com - 3 weeks ago
After years of thriving in the Florida Everglades, alligators are now struggling to survive there. Scientists are now tagging as many gators as they can in hopes of tracking them and determining what might be threatening the species. CBS News' Bigad Shaba
Read More

As teachers return to classrooms, COVID-19 vaccines not always included

www.cbsnews.com - 4 weeks ago
As daily COVID-19 cases decline and vaccinations rise, the discussion surrounding reopening schools safely continues. Meg Oliver speaks with one family of teachers from Massachusetts about their worries, and their hopes.
Read More

Ed Sheeran and his wife announce birth of baby girl