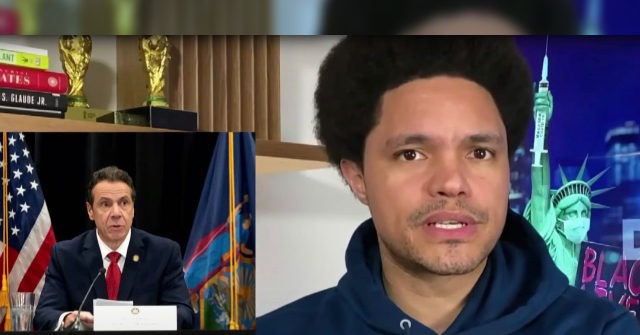 “I’ll tell you, all those people who praised Cuomo so highly last year, those people really don’t look so smart now,” Trevor Noah said on Monday, making a self-deprecating joke, as he had previously praised the New York governor.

In an interview with The Ellen Show host Ellen DeGeneres last year, Noah said, “It genuinely has been very inspiring and refreshing to see a leader like Cuomo.”

“He’s also taken blame for things where he says, ‘Look, I understand that I’m doing certain things that people are going to hate me for, and I’m willing to make these decisions, because I think it’s the best thing for human life,” added the Daily Show host.

One year later, it turns out that Noah’s previous remarks had offered a bit of foreshadowing, as the public now appears to have a lot of disdain for the New York governor, who has recently fallen under fire for his administration’s handling of the state’s nursing homes amid the coronavirus pandemic.

A directive the governor made last March forced nursing homes to accept coronavirus-positive patients in order to free up hospital beds — a move that resulted in additional nursing home deaths, which Cuomo’s administration was later accused of underreporting.

But the scandals encompassing Governor Cuomo don’t end there.

“We have to talk about the political scandal that is rocking the country,” Noah said on Monday. The Daily Show host went on to play a montage of video clips from news outlets breaking down the multiple sexual harassment accusations recently made against the New York governor.

Among those clips included Cuomo’s defense of himself, in which the governor stated that he was just trying to be “playful.”

“Guys, of course he was being playful, I mean, imagine your much older, politically powerful boss turns to you and says, ‘When was the last time you were really hugged?’ That’s super playful. Can’t you feel your skin crawling with delight?” quipped Noah.

“Even if Cuomo did think that he was just being playful, it’s still not okay,” Noah continued, using a more serious tone. “This is what bosses never seem to understand. If you’re a boss, you should never be flirtatious with your employees.”

“Because as a boss, you’re basically a dragon. Nobody’s ever trying to hug a dragon. They’re just trying to get out of the cave in on piece,” he added.

You know that it’s not good when you’re the person in trouble, and you’re like, “Guys, please, remember all those people in nursing homes I got killed? Let’s talk about that again.”

Report: India Is the Only G20 Nation Honoring Its Paris Climate Accord Commitments

www.breitbart.com - 5 months ago
India is the only G20 nation doing its "fair share" to meet the climate change mitigation commitments it agreed to under the 2015 Paris Climate Accord, a 2020 Climate Transparency report published on Wednesday revealed.
Read More

DCCC Hires Staffer with History of Anti-Law Enforcement Posts: 'I Hate the Police'

CNBC's Shepard Smith: 'Last Night the President Called into Question the Heart of Our Democracy’