A 15-minute call with J&J executives on a Sunday afternoon stretched into a 75-minute turning point. "We have to take bold action and overwhelm this," a senior official said. (Image credit: Evan Vucci/AP)
Author: Tamara Keith
Published: 2021-03-03 06:41 am 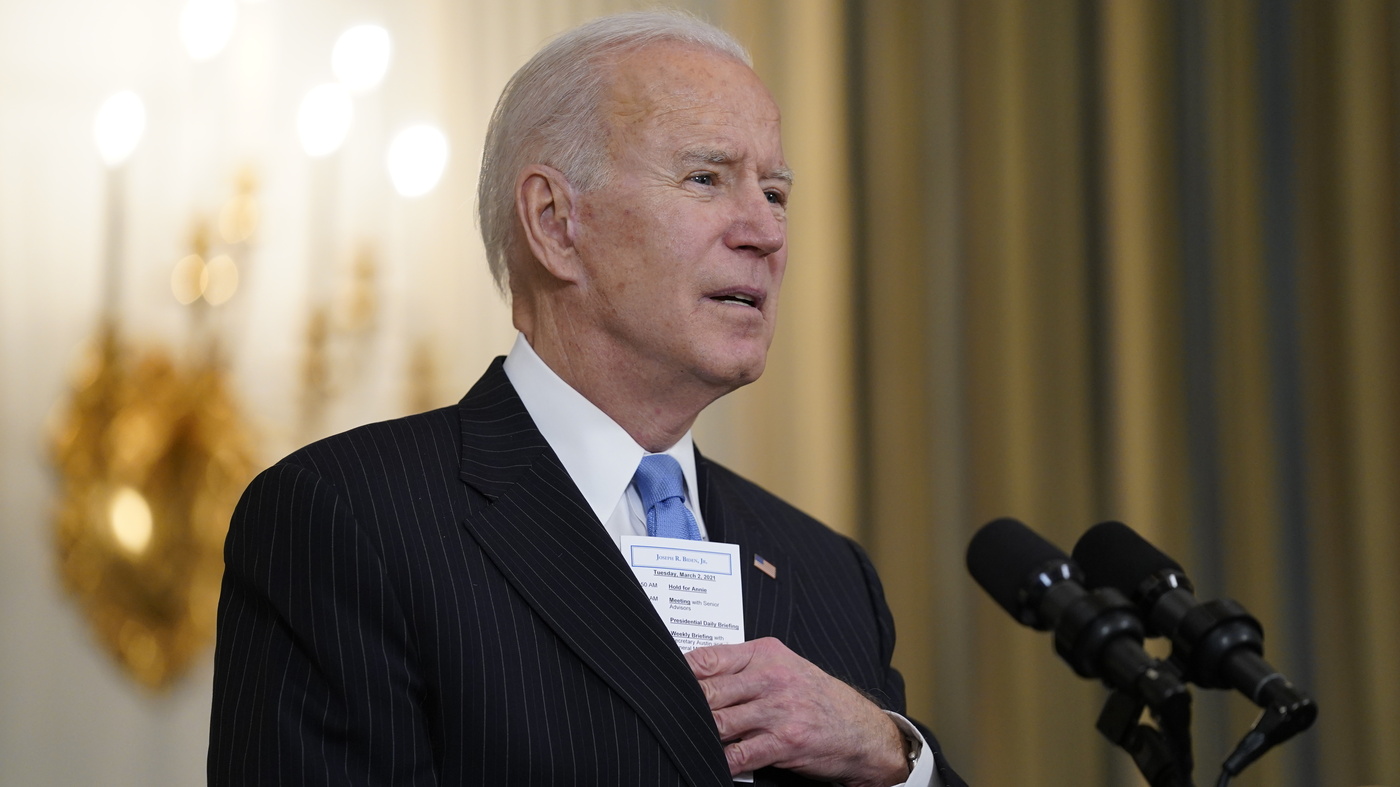 President Biden said on Tuesday that a key milestone in the fight against COVID-19 could be reached two months faster than earlier projected. By the end of May, there should be enough vaccine doses for every adult in America, he said — a dramatic improvement to his initial timetable for late July.

A turning point in speeding up that pledge came a few weeks ago, on a Sunday afternoon in early February, during a phone call with Johnson & Johnson executives that had been planned for 15 minutes but stretched for longer than an hour, two senior administration officials told NPR.

Biden administration officials had been pushing vaccine makers to find ways to get more doses faster. Early talks with Moderna and Pfizer led to increased commitments. "Those are some of the hardest negotiations — I've done a lot of them," said one of the officials involved in the talks.

Then there was Johnson & Johnson. Its single-dose vaccine looked promising, but even before it had been approved for emergency use, it was clear that the company would not be able to meet its contracted production.

Then came the call, where White House officials got on the line with J&J executives to talk about the urgency of the situation.

"The basic conclusion of that call was, we've got to think much bigger and much bolder," recalled a senior administration official who was on the line. "We have to take bold action and overwhelm this."

That February call helped lead to an agreement with Merck — a competitor that had given up on its own vaccine work — to help produce J&J's vaccine, and use its facilities to get it into vials.

The two companies had held some preliminary talks about working together before the Biden team got into the White House, but those proposals had been "at a very small level of ambition" and were "dead by the time we got in" to office, said the official, who knew the CEOs of both companies.

The official called J&J CEO Alex Gorsky to express concern, and later called Merck CEO Kenneth Frazier. "I said, 'You know — heads up — there might a need for Merck to help here,'" the official recalled.

But it was after the early February phone call that officials felt like J&J had embraced the push, said a second official who was involved in the talks. "They understood this was a wartime effort. This was their legacy. This was their time."

The Defense Production Act, which gives the government the power to compel companies to support war effort, provided some "implicit" incentive for the companies to cooperate, administration officials said. "You have the potential to use the DPA if there isn't cooperation," one of the officials said.

The resulting agreement came with an invocation of the DPA that helped accelerate some J&J vaccine deliveries to May that had earlier been set for June, and also will provide assistance to Merck. President Biden announced J&J would be running its U.S. facilities "24/7" to speed vaccine out the door.

Merck said it would receive up to $268.8 million in government funding to help make adjustments to its facilities, where it will help fill vials with J&J's vaccine, and eventually also produce the drug substance used in the J&J vaccine. In a brief statement, Johnson & Johnson said it was "pleased to collaborate" with Merck on the arrangement to boost production.

The officials said getting Merck involved will vastly increase production of the Johnson and Johnson vaccine in the "medium term." That capacity may be needed to produce doses to vaccinate children, an official said, or to make a booster if variants make the current vaccine

The Biden administration is racing against variants of COVID-19 that could make the existing vaccines less effective. Beyond simply getting the vaccines made and put into vials, they also have to get doses into arms, which is a massive undertaking involving everything from standing up mass-vaccination clinics to recruiting retired medical professionals to administer shots. Soon the emphasis will turn from scarcity to persuasion as the administration and public health officials work to reach people who may be reluctant to get the vaccine.

www.npr.org - 4 months ago
Isolation and the disappearance of live music changed the All Songs Considered host's listening habits drastically in 2020. These albums offered not just calm, but richness and depth to explore. (Image credit: Courtesy of the artists / Photo illustration
Read More

Bonobos Offer Clues To Why Humans Evolved To Value Niceness

www.npr.org - 3 weeks ago
Humans evolved to be nice — at least sometimes. The trait has helped us succeed as a species. But how did it happen? A look at some peace-loving apes in Democratic Republic of the Congo offers clues.
Read More

www.npr.org - 4 months ago
South Korea, which has largely succeeded in keeping the coronavirus in check, is now seeing a new spike in cases. Restrictions on big gatherings and social distancing rules will begin on Tuesday.
Read More
More News & Articles