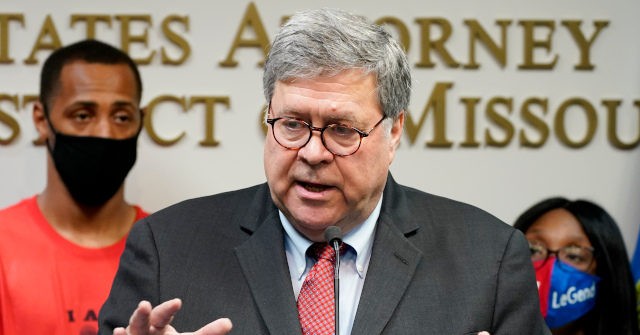 Fox Business reports that despite the preliminary approval earlier this week of a partnership between the Chinese-owned app TikTok and U.S. firms Oracle and Walmart by President Donald Trump, Attorney General William Barr is not yet convinced that the partnership is sufficient to protect the data of U.S. citizens from the Chinese government.

A spokeswoman for Barr told Fox Business that Barr “is still in the fact-gathering stage and has not reached a final decision or made a final recommendation to the president.” Barr’s concern has reportedly delayed the administration’s approval despite President Trump and Treasure Secretary Steven Mnuchin reportedly being prepared to sign off on the deal. Mnuchin also chairs the Committee on Foreign Investment in the U.S. which has to approve any foreign transaction.

Breitbart News recently reported that a disagreement between TikTok and its potential U.S. partner Oracle over the ownership structure for a U.S.-based version of the company has gone public. The argument raises questions about the stability of the deal that President Donald Trump approved in principle over the weekend, which appeared to save TikTok from being banned in the U.S.

All parties involved in the deal have agreed that Oracle and Walmart would take a combined 20 percent stake in TikTok Global, a new U.S.-based company planned as part of a deal to save the app from being banned over national-security concerns.

Oracle executive vice president Ken Glueck said this week: “Upon creation of TikTok Global, Oracle/Walmart will make their investment and the TikTok Global shares will be distributed to their owners, Americans will be the majority and ByteDance will have no ownership in TikTok Global.”

ByteDance seemingly disputes this, claiming that as TikTok’s corporate parent that it would hold 80 percent interest in the newly formed TikTok Global.

On Monday, President Trump sided with Oracle over the deal telling Fox News: “They are going to own the controlling interest. Everything is going to be moved into a cloud done by Oracle…and it’s going to be totally controlled by Oracle. If we find that they don’t have total control, then we’re not going to approve the deal.”

“We will be watching it very closely. On a preliminary basis we like the fact that these are two great companies,” President Trump said discussing Oracle and Walmart.

Now Barr, Pompeo, and other national security advisors have claimed that the deal does not alleviate national security concerns as TikTok’s parent company would still maintain control of its algorithm and own a large chunk of the new company. The Commerce Department has now set a deadline of November 12th for TikTok to find a U.S. buyer but the President has implied that the app could be banned as early as next week.

In response to this news, on Wednesday TikTok filed a temporary injunction to prevent the administration from banning the app. Oracle and TikTok have declined to comment on the situation to Fox Business.

Read more about the TikTok deal at Breitbart News here.

Lucas Nolan is a reporter for Breitbart News covering issues of free speech and online censorship. Follow him on Twitter @LucasNolan or contact via secure email at the address lucasnolan@protonmail.com

Democrat Terry McAuliffe in 2007: Illegal Aliens 'Taking Our Jobs,' Deport 'Them Back to Countries They Came From'

www.breitbart.com - 7 months ago
Former Virginia Gov. Terry McAuliffe (D), running again for Virginia governor, once called for the United States to "shut these borders down" and to deport illegal aliens "taking our jobs" back to "the countries they came from."
Read More

www.breitbart.com - 12 months ago
The United Arab Emirates (UAE) announced on Tuesday that its unmanned spacecraft, named “Amal” or “Hope,” has entered orbit around Mars. The UAE thus became the fifth nation to reach Mars, and the first Arab nation to do so.
Read More
More News & Articles