Demonstrators in Myanmar protesting last month’s military coup have returned to the streets, undaunted by the killing of at least 38 people by security forces the previous day
Author:
Published: 2021-03-04 03:53 am 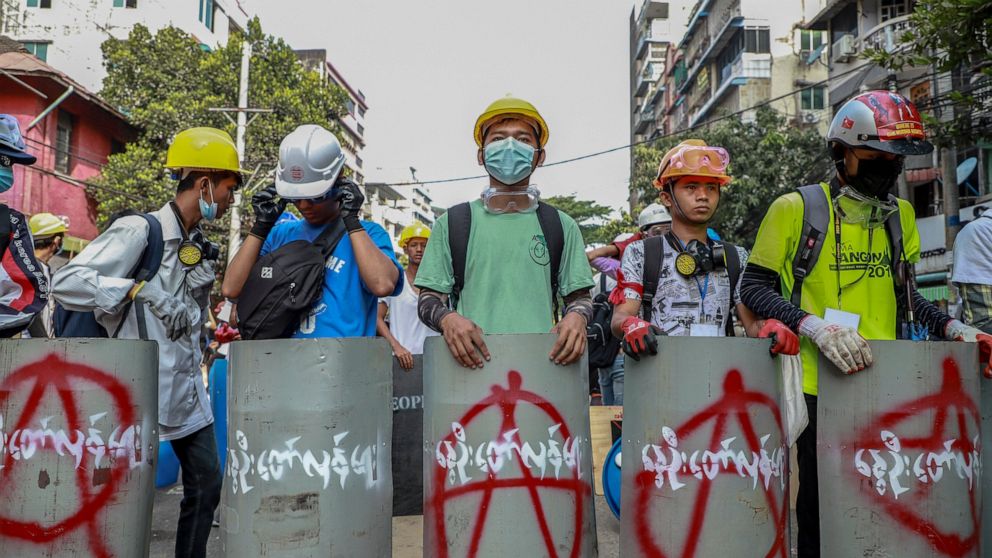 Demonstrators in Myanmar protesting last month's military coup returned to the streets Thursday, undaunted by the killing of at least 38 people the previous day by security forces.

New protests were held in at least three areas of Yangon, the country's largest city, that have been scenes of violence for the past few days. Police again used force to try to disperse the crowds, according to social media accounts.

Protests also continued In Mandalay, the second-biggest city. A formation of five fighter planes flew over the city on Thursday morning in what appeared to be a threatening show of force.

The U.N. special envoy for Myanmar, Christine Schraner Burgener, said 38 people were killed Wednesday, a figure consistent with other reports.

The death toll was the highest since the Feb. 1 takeover, when the military ousted the elected government of leader Aung San Suu Kyi. More than 50 civilians, mostly peaceful protesters, are confirmed to have been killed by police and soldiers since then.

The U.N. Security Council has scheduled closed-door consultations on Friday on calls to reverse the coup — including from U.N. Secretary-General Antonio Guterres — and stop the escalating military crackdown.

Any kind of coordinated action at the United Nations will be difficult since two permanent members of the Security Council, China and Russia, are likely to veto it. Some countries have already imposed or are considering their own sanctions.

The coup reversed years of slow progress toward democracy in Myanmar, which for five decades had languished under strict military rule that led to international isolation and sanctions. As the generals loosened their grip, culminating in Suu Kyi’s rise to power after 2015 elections, the international community responded by lifting most sanctions and pouring investing into the country.

Schraner Burgener said the army has been taken aback by the strong opposition, which has been led by young people.

“I think that the army is very surprised that it doesn’t work because in the past, in 1988 and 2007 and 2008, it worked,” she said, referring to previous violent crackdowns on uprisings against military rule.

Demonstrators have flooded the streets of towns and cities across Myanmar since last month's coup, even though gatherings of five or more people are banned and security forces have repeatedly fired tear gas, rubber bullets and live rounds to disperse the crowds, and arrested protesters en masse.

Wednesday's highest death toll was in Yangon, where an estimated 18 people died. Most if not all of the deaths occurred in the eastern neighborhood of North Okkalapa.

Stark video shot Wednesday night at the main hospital there showed grieving relatives collecting the blood-soaked bodies of family members who were shot. Some relatives sobbed uncontrollably, while others looked in shock at the scene around them.

Protesters in Mandalay flashed a three-fingered anti-coup salute on Thursday as they rode their motorbikes to follow a funeral procession for Kyal Sin, also known by her Chinese name Deng Jia Xi, a university student who was killed as she attended a demonstration on Wednesday. The black hearse that carried her remains had a photo of her on the windshield, and the hearse was preceded by a truck full of floral bouquets. Many thousands of people attended.

In the central city of Monywa, which has turned out huge crowds of protesters on an almost daily basis, a memorial service was held Thursday before a protest march began. At least eight people were reported to have been killed on Wednesday.

According to multiple posts on social media, protests were also happening Thursday in Pyinmana, a satellite town of the capital Naypyitaw; Myingyan in central Myanmar, where there was one death Wednesday; Pathein, west of Yangon; and Myeik, near the country’s southern tip.

As part of the crackdown, security forces have arrested well over a thousand people, including journalists, according to the independent Assistance Association for Political Prisoners. On Saturday, at least eight journalists, including Thein Zaw of The Associated Press, were detained. he and several other members of the media have been charged with violating a public safety law that could see them imprisoned for up to three years.

Belarus to hold constitutional vote in less than one year

abcnews.go.com - 2 months ago
Belarus' authoritarian leader says a referendum on changing the ex-Soviet nation’s constitution will be held in less than a year, part of government efforts to stem the tide of opposition protests
Read More

UK to allow emergency use of any effective COVID-19 vaccine

abcnews.go.com - 8 months ago
Britain is preparing to revise its laws to allow the emergency use of any effective coronavirus vaccine before it is fully licensed but only if the shots meet required safety and quality standards
Read More

abcnews.go.com - 1 month ago
The suspected abduction and murder has spurred outrage over women's safety.
Read More

An Election Day role for National Guard? Maybe, but limited

abcnews.go.com - 6 months ago
If the military has any role in next week's election, it most likely will involve National Guard members under state control — not troops on federal duty
Read More
More News & Articles