Scotch whisky and other goods have been subject to a 25% tariff. The levies cost companies hundreds of millions of dollars in lost exports, according to the Scotch industry. (Image credit: Andy Buchanan/AFP via Getty Images)
Author: Bill Chappell
Published: 2021-03-04 09:43 am 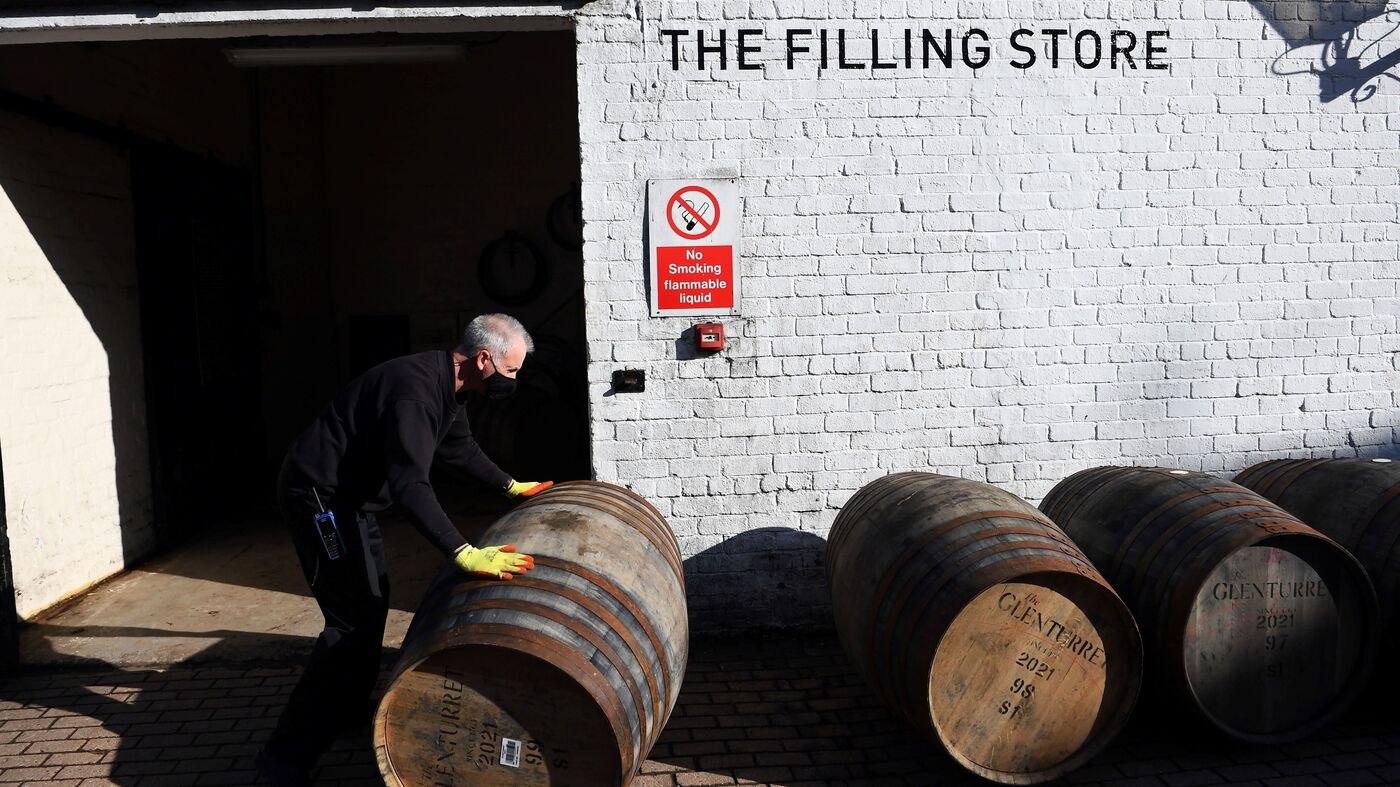 The Biden administration will suspend steep tariffs on Irish and Scotch whiskies, English cheeses and other products, after reaching an agreement with the U.K. Former President Trump had imposed the tariffs in late 2019 as part of a long-running dispute over the aviation industry.

Scotch whisky and other products had been subject to a 25% tariff. But as of today, the tariffs will be suspended for at least four months. Other products, from pork to cashmere and machinery items, had also been hit by the tariffs that are now suspended. Their damage has been compounded in the past year by the COVID-19 pandemic.

"Trade is key to economic recovery," U.K. Trade Secretary Liz Truss said. She noted that in the year before the tariffs, the U.S. had imported £550 million (nearly $770 million) worth of the affected U.K. goods.

In Scotland, news of the deal prompted a peaty sigh of relief.

"This is fabulous news, and our industry is delighted," said Scotch Whisky Association Chief Executive Karen Betts. She added that the tariffs on single-malt whisky have done real damage in the past 16 months, "with exports to the U.S. falling by 35%, costing companies over half a billion pounds."

In a joint statement, the U.S. and U.K. said that the tariff suspension will "ease the burden on industry and take a bold, joint step towards resolving the longest running disputes at the World Trade Organization."

The dispute involves claims and counter-claims of unfair subsidies and support for two aviation giants: Boeing and Airbus. The U.K. eased its own tariffs on U.S. goods related to the dispute in January, in a bid to "create space for a negotiated settlement" that could end the years-long dispute.

In October of 2019, the WTO said the U.S. could move ahead with plans to impose tariffs on European goods, to counteract years of loans and illegal subsidies to Airbus. The U.S. tariff list included Scotch and other goods produced in the U.K. — which formally exited the European Union one year ago.

U.K. Prime Minister Boris Johnson touted the deal as proof of the U.K.'s ability to act as an "independent trading nation" rather than as part of the EU.

"I now look forward to strengthening the UK-US relationship, as we drive economic growth and build back better together," Johnson said.

On Thursday, the Office of the U.S. Trade Representative and the U.K. Trade Ministry hailed the tariff breakthrough as a chance to help dozens of industries on both sides of the Atlantic. They also said the deal would help the two countries focus on an increasingly competitive global aviation market, rather than being preoccupied with a lingering dispute.

The deal will give momentum to negotiations for a "balanced settlement" to the Boeing-Airbus fight, they said, adding that the two sides must also address "challenges posed by new entrants to the civil aviation market from non-market economies, such as China."

www.npr.org - 2 months ago
Identical twin comedy duo Keith and Kenny Lucas are on the rise. They wrote the story for the new movie, Judas and the Black Messiah, and they're involved with a new rework of Revenge of the Nerds. (Image credit: Courtesy of Loshak PR)
Read More

www.npr.org - 7 hours ago
The prosecution is nearing the end of its case, and Chauvin's defense is expected to begin presenting its case this week.
Read More

So 2020: New Storm Forms, Named Alpha Because We've Run Out Of Letters

www.npr.org - 7 months ago
There's only been one other year – 2005 – that Greek names have been needed. The National Hurricane Center on Friday announced Subtropical Storm Alpha has formed off the coast of Portugal. (Image credit: Courtesy of NOAA)
Read More
More News & Articles