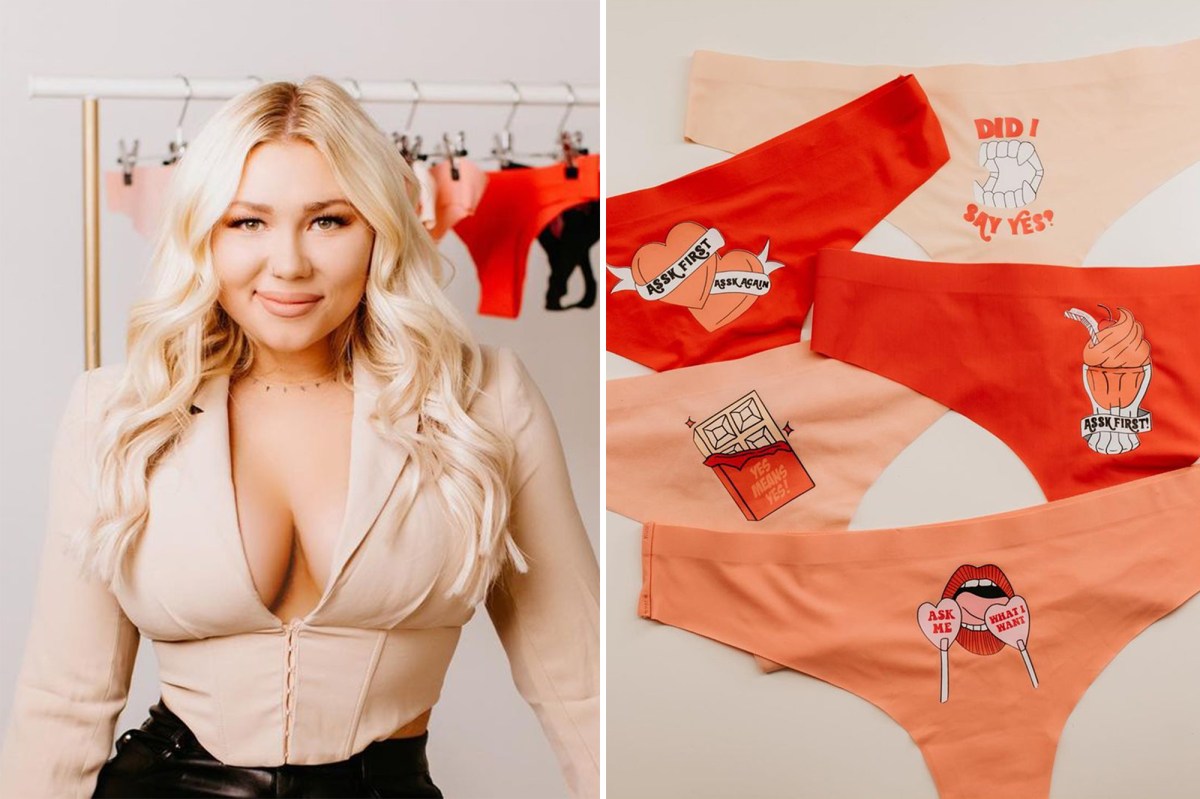 To this lingerie designer, nothing is hotter than consent.

A survivor of sexual assault designed a line of underwear called Assk First to encourage partners to start talking openly about consent.

Embellished with phrases like “ask the cutie before touching the booty,” “yes means yes” and “consent is sexy,” Fairon hopes her cheeky designs will help open up a dialogue between sexual partners.

“If someone is in an intimate scenario and it gets down to the underwear, I imagine their partner being stopped in their tracks, like ‘Wait, what does your underwear say?’ ” she said. “At the end of the day, your underwear is the last thing on you. I felt like it was important to start there because it could reach a lot of women and resonate with them.”

Fairon brings her own experience to the endeavor: She was sexually assaulted when she was 14-years-old. She and her close friend, activist Daisy Coleman, were featured in the 2016 Netflix documentary “Audrie & Daisy,” about victims of sexual assault. Coleman, who struggled with mental health issues after her assault, died by suicide last year. Moved by the loss of her friend, Fairon launched Assk First in December of 2020, and is currently raising funds for the brand on Kickstarter. Some of the products carry the name “Cat,” Daisy’s nickname, in her honor.

The laser-cut seamless undies range in sizes XS to XL. Pre-orders will ship out by April.

Proceeds from the sales will go to SafeBAE, “a survivor-founded, student-led national organization whose mission is to end sexual assault among middle and high school students. ” Fairon and Coleman founded the group in 2017.

“I wanted to reach a demographic of people that still think this could never happen to them and still think that certain actions aren’t assault, but are,” said Fairon. “I don’t want anyone to go through what I went through. I never want to hear of another young girl waking up and having her life completely different — not knowing who she is anymore.”

If you have experienced sexual assault and need support, contact the National Sexual Assault Hotline 24/7 at 1-800-656-4673 or visit RAINN.org.

nypost.com - 3 months ago
The mustachioed music man offered a PDA-filled glimpse into his marriage.
Read More

nypost.com - 3 months ago
Tom Brady has deftly avoided any Bill Belichick drama since their Patriots divorce this offseason. Tom Brady Sr., though, not so much. The father of the now Buccaneers Super Bowl quarterback took a little bit of a dig at Belichick in an interview with the
Read More

nypost.com - 3 months ago
A Georgia police chief and an officer have been removed from their roles for making racist remarks on bodycam footage ahead of a Black Lives Matter protest, city officials said. Hamilton police Chief Gene Allmond and Sgt. John Brooks were caught using
Read More

nypost.com - 6 months ago
The healthy growth spurt that Netflix has enjoyed this year because of the coronavirus is finally coming to an end. The video-streaming giant — which has been one of a handful of companies to get a big business boost from the pandemic — on Tuesday posted
Read More
More News & Articles