It's your last chance to snag our favorite Southwest Airlines perk 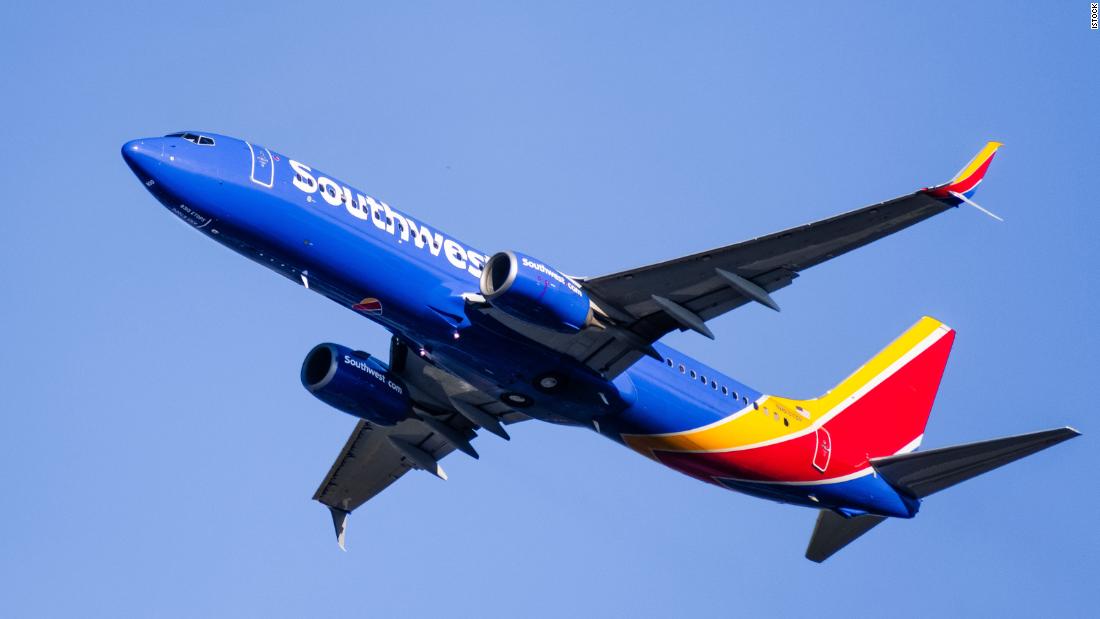 CNN Underscored reviews financial products such as credit cards and bank accounts based on their overall value. We may receive a commission through the LendingTree affiliate network if you apply and are approved for a card, but our reporting is always independent and objective.

Want to fly two-for-one for the next year? If so, there’s an offer currently available on all three Southwest Airlines personal credit cards that might be the opportunity you’ve been waiting for, but there’s only a few days left to take advantage of it.

But these offers are only available through March 10, 2021, so if you’re going to grab one of them, now’s the time to move before they disappear.

If you’re asking “What’s a Southwest Companion Pass?,” we promise it’s not a gimmick. It truly is a no-strings-attached pass that allows a companion to fly with you on Southwest for free (plus taxes and fees) as long as there’s at least one seat left for sale on the plane. The taxes and fees are generally minimal, and you can use the perk an unlimited number of times during the life of the pass.

Since Southwest points are worth about 1.5 cents per point when you redeem them for the airline’s cheapest “Wanna Get Away” fares, the 30,000 bonus points you’ll get with these offers are worth about $450 in travel.

The value of these entire offers depends on how much use you’ll get out of the Companion Pass. If you think you’ll find yourself flying a lot in the next year, then the value will be astronomically high — the more you fly, the more your companion can also fly for free. However, if you don’t think you’ll be traveling much (or at all) through the beginning of 2022, this probably isn’t the right card offer for you.

Aside from earning the Companion Pass and bonus points from the sign-up bonuses, these three cards also come with many other benefits for Southwest flyers — although some are better than others. But depending on the card, if you expect to fly Southwest regularly when travel resumes, you may find some of them to be extremely useful.

With all three Southwest cards, you’ll receive bonus Rapid Rewards points on a yearly basis, starting with your first anniversary (meaning one year from the date you originally get the card). These points help significantly offset the cost of the card’s annual fee.

Southwest has a different seat assignment policy than most other airlines — there are actually no assigned seats. Instead, the carrier has open seating, where you pick your preferred seat upon boarding the plane. Your boarding position — which you get when you check in for your flight — determines when you board. All passengers receive a boarding position between A1 and C60, with A1 being first to board and C60 being last.

With the Southwest Priority card specifically, you get four upgraded boarding positions per year to use on Southwest flights. This means you can purchase an A1-15 boarding position at the gate (if available, giving you the opportunity to board the plane before most other passengers, and you’ll receive a statement credit for the amount charged.

Purchasing an upgraded boarding position normally costs between $30 and $50, so this benefit is worth $120 to $200 per year.

• 20% back on inflight drinks and WiFi

The Southwest Priority credit card offers 20% back on your inflight purchases, including Wi-Fi.

Again, an exclusive benefit of the Southwest Priority card is 20% back on inflight drinks and Wi-Fi purchases. While this isn’t a huge savings, over time, it could save you a few bucks.

However, if you fly on Southwest often (or intend to once travel resumes more broadly) and typically pay for Wi-Fi on your flights, you might want to consider the Southwest Rapid Rewards Performance Business Credit Card instead, since you can get complimentary Wi-Fi on essentially every Southwest flight you take with that card — up to 365 statement credits per year.

The best part of these offers is that they come with a Southwest Companion Pass. Traditionally, you have to earn 125,000 tier-qualifying points in a calendar year to get the pass, but with these offers, you can bypass that requirement and earn the pass simply by getting approved for any of the three Southwest personal credit cards and meeting the $5,000 spending requirement in the first three months.

Now, when you earn the pass using the traditional method, it doesn’t expire until December 31 of the following calendar year. But the Companion Pass earned with these promotional offers expires on February 28, 2022, so it’s a much shorter amount of time — nearly a year, depending on when you apply and complete the spending requirement.

However, if you want to earn the pass for longer, you can still do it the traditional way, and these bonus offers can help with that too. Since the airline counts all Southwest credit card points toward the Companion Pass, the 30,000 points you earn as part of these sign-up offers will also count toward the 125,000 tier-qualifying points needed in this calendar year for a pass that lasts until the end of 2022.

Also, for just this year, if you had a Southwest frequent flyer account open on December 31, 2020, you should have already received 25,000 Companion Pass-qualifying points in your account, meaning you only have to earn 100,000 points this year.

So with the 30,000 bonus points from these offers, you’d only need to earn 70,000 more points in the rest of 2021 to get a full-length pass. And there are many ways to earn those remaining Companion Pass points, such as using the Southwest shopping portal, crediting your hotel and car rentals to Southwest, ongoing usage of your Southwest credit card and simply flying Southwest on paid fares.

Combining a personal Southwest credit card with a business one could earn you an even longer Companion Pass.

Right now, you can earn an additional 60,000 bonus points with the Southwest Rapid Rewards Premier Business Credit Card after you spend $3,000 on purchases in the first three months. Add those 60,000 points together with the 80,000 points from any of the personal card offers, and you’ll end up with 140,000 total points, enough to earn the Companion Pass without any additional points.

While the Performance Business card can earn you the pass on its own — without even having to apply for a personal card — the minimum spending requirement to earn the full bonus is quite high. However, if you’re only able to meet the first spending tier of $5,000, you’ll still earn 70,000 points. Add that to the 30,000 points from the personal card, and you’ll be over the amount needed to earn the pass this year (assuming you received the 25,000-point boost for having a Southwest account at the end of 2020).

You also can apply for the personal card now and hold off on applying for the business card in the future (assuming the current offer or a similar one exists by then), so you don’t have to hit the minimum spending requirements on two cards at the same time.

With three different personal cards on the table, it’s important to know which card is best for your individual needs. If your main goal is to increase your Southwest Rapid Rewards points balance and earn points toward the Southwest Companion Pass, then the Southwest Plus card is best. This card carries the lowest annual fee at just $69 per year, but offers the same promotional Companion Pass and 30,000-point sign-up bonus.

Apply now for the Southwest Rapid Rewards Plus card.

The benefits of the Southwest Premier card are similar to the Southwest Plus card, but you’re paying a higher annual fee at $99. Although you’ll earn more bonus points on your card anniversaries, you don’t earn them until you complete your first year as a card holder and pay your second annual fee.

But if you fly Southwest a decent amount throughout the year — or plan to once travel resumes — and you want a card rich in benefits, then the Southwest Priority card is your best option. Although it has a significantly higher fee at $149, the benefits alone are easily worth it if you can use them.

The Southwest Priority card’s $75 travel credit brings the effective cost of the card down to just $74. On top of that, you’ll receive four upgraded boarding per year and a 20% statement credit on inflight drinks and Wi-Fi. If you can maximize those benefits, you can easily be ahead in your first year alone. And starting with your second year, you’ll always be ahead once you add in the 7,500 bonus points at each card anniversary, which are worth $90 in Southwest flights.

If you apply for a Southwest credit card now, you'll receive a Companion Pass and have it all the way through February 28, 2022.

Our general rule of thumb is if you’re planning on flying at least twice on Southwest in the next year, then yes, this is a great time to apply for one of the cards. Generally, one of the biggest perks of applying for a Southwest credit card is to get one step closer to earning the Companion Pass, and with this particular offer, you get it as soon as you meet the spending requirement. No hoops to jump through or extra points to earn.

However, if travel is truly not in your future in 2021, then we suggest holding off on applying for a Southwest credit card. While you’ll still earn 30,000 bonus points with these offers, the bigger draw is the Companion Pass, and it has an early 2022 expiration date tied to it.

So, if airline perks don’t work for your travel needs right now, apply for this card later this year or next year when you believe you’ll be flying again. But if you’re hoping to take to the skies on a regular basis in the second half of 2022 and want to bring a friend or family member along for the ride, apply for a personal Southwest credit card today before these offers vanish on March 10, 2021, and grab a Southwest Companion Pass that you can use all the way through next February.

Find out which cards CNN Underscored chose as its best credit cards of 2021.

www.cnn.com - 7 months ago
President Donald Trump's former top Russia adviser said Tuesday that the United States is increasingly seen as "an object of pity" and its standing on the world stage is eroding.
Read More

www.cnn.com - 8 months ago
Labor Day weekend celebrations are in full swing -- and many include the large crowds health experts feared.
Read More

Baby barred by travel ban now recovering after surgery in US

www.cnn.com - 4 years ago
The uncle of an Iranian baby ensnared in President Trump's travel ban settled on one word Monday to express gratitude to everyone who helped his niece get to the United States for a life-saving heart medical procedure.
Read More
More News & Articles