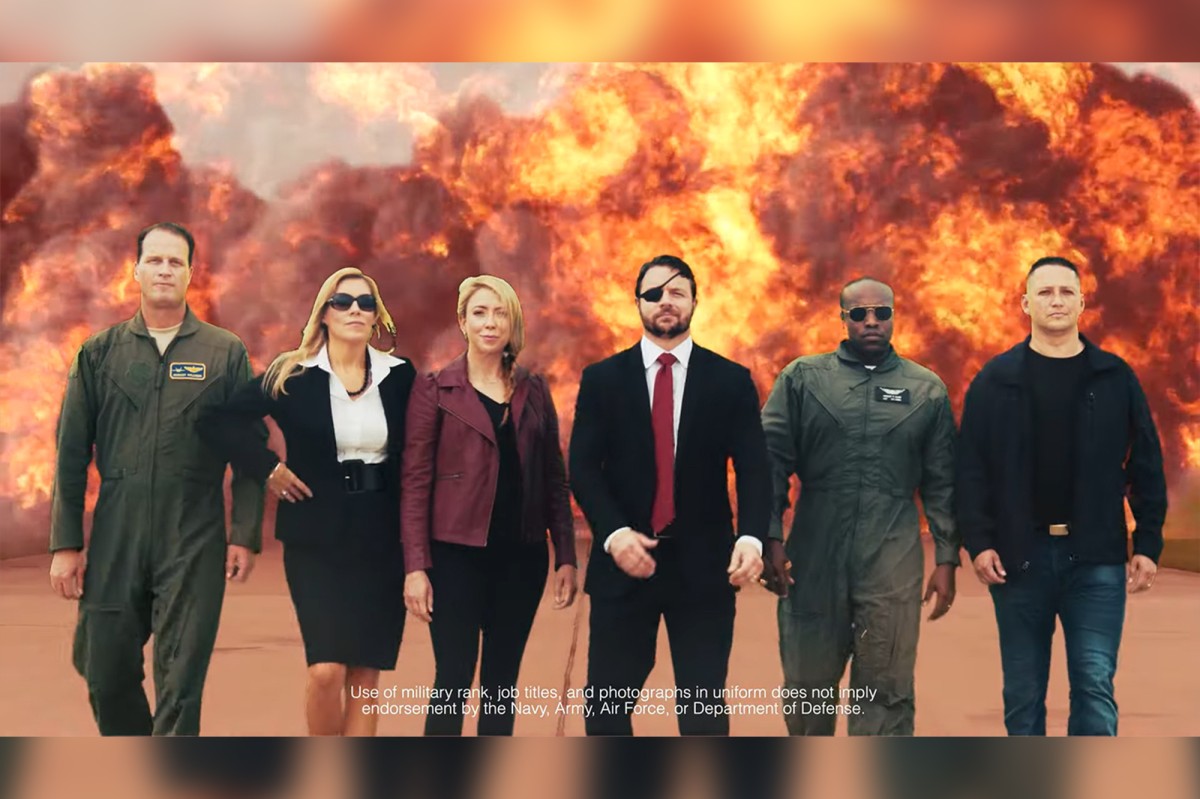 Everything’s bigger in Texas — and campaign ads are no exception.

Republican Rep. Dan Crenshaw dropped an epic, four-minute spot on Thursday casting him and five fellow Texas GOPers as an “Expendables”-esque team in a high-stakes fight to take the polls this fall.

The ad opens at 5 a.m. in the “Crenshaw Command Center,” where the former Navy SEAL and first-term congressman tears open an envelope marked “Top Secret.”

He removes his signature eyepatch — which covers a wound dealt to him by an IED while on deployment in Afghanistan — and uses futuristic tech implanted in the socket to interact with a smartphone he pulled from the package.

“Your mission, should you choose to accept it, will be to save Texas,” intones a posh, British voiceover as the music swells and Crenshaw boards a plane, wearing a parachute and fatigues.

“To do so, you must recruit an exceptional team of congressional candidates,” the voiceover continues. “The nation’s future is dependent upon your success.”

Over Houston, Crenshaw drops from the plane, entering freefall before finally pulling his parachute’s rip cord — and touching down on an airstrip with an Avengers-style, fist-first landing.

“I’m putting a team together, Wesley. You in?” asks Crenshaw of an aviators-wearing, cigar-chomping man seated in the cockpit of a helicopter.

“You know I wouldn’t miss this for the world,” replies the recruit, identified in a freeze-frame overlay as Texas congressional candidate Wesley Hunt, an Apache helicopter pilot and West Point graduate “ready to make DC work for us.”

Another GOP candidate, August Pfluger, slides out from under the chopper on a mechanic’s creeper and adds, “You guys looking for a real pilot? Let me get cleaned up.”

An overlay identifies Pfluger as an F-22 combat pilot, US Air Force colonel and seventh-generation Texan, as well as a “husband, father [and] Christian.”

“Dan, bro, you could’ve just texted me. Why you gotta jump out of airplanes?” ribs Hunt as the trio strides down the runway.

They then criss-cross Texas to recruit more GOP congressional candidates to their cause.

First is former Irving, Texas, Mayor Beth Van Duyne — who was found in Dallas presenting a medal to a cop and joins the crew with a camera-rattling handshake with Crenshaw.

Next stop is San Antonio, where US Navy master chief, cyber warfare expert and “Hispanic conservative” Tony Gonzales is interrupted by Crenshaw while apparently trying to hack into a computer system.

In a case of questionable routing, the group then heads back to Dallas, where they find “problem solver, business woman [and] athlete” Genevieve Collins easily beating a man in a martial arts showdown.

“Hey guys. Who’s next?” she asks the fivesome, none of whom rushes to step forward until Van Duyne pulls off her coat and says, “I got this.”

The ad closes on a shot of the assembled six walking down an airstrip as two helicopters fly in overhead — and a massive explosion erupts behind them.

The shot fades to the phrase, “Texas: Reloaded.”

“Credits” for the trailer list Crenshaw as one of the writers.

Throughout his two years in office, Crenshaw has been a reliable ally of President Trump, and stumped on behalf of his reelection effort at the Republican National Convention.

nypost.com - 4 months ago
American tennis player Christian Harrison has been fined $3,000 by the ATP after refusing to take part in a mandatory on-court interview at the Delray Beach Open in Florida as it required him to wear a mask. The qualifier, ranked 789th in the world,
Read More

nypost.com - 4 months ago
Former NFL offensive lineman Tony Jones, who started on the Broncos’ back-to-back title teams in the 1990s, died Friday at the age of 54, according to the team. A cause of death was not provided. Jones, known as “T-Bone,” played 13 seasons with the Browns
Read More

nypost.com - 3 weeks ago
Cowboys linebacker Sean Lee is hanging up his cleats for good after 11 seasons with the storied franchise. “I was privileged to wear the Cowboys star. We want to play forever. But today, it’s my time to walk away,” Lee, 34, said in a letter announcing his
Read More

Ravens-Steelers on for Thanksgiving despite positive coronavirus tests

nypost.com - 6 months ago
A COVID-19 outbreak isn’t going to take away the primetime game on Thanksgiving. The Baltimore Ravens had five players and four staffers test positive this week for the novel coronavirus, according to ESPN. The Thursday night game against the Pittsburgh
Read More
More News & Articles