A timeline of disaster and displacement for Iraqi Christians

In Iraq, two decades of back-to-back conflicts have left ancient Christian communities that were once a vibrant and integral part of the landscape scattered and in ruins
Author:
Published: 2021-03-05 01:06 am 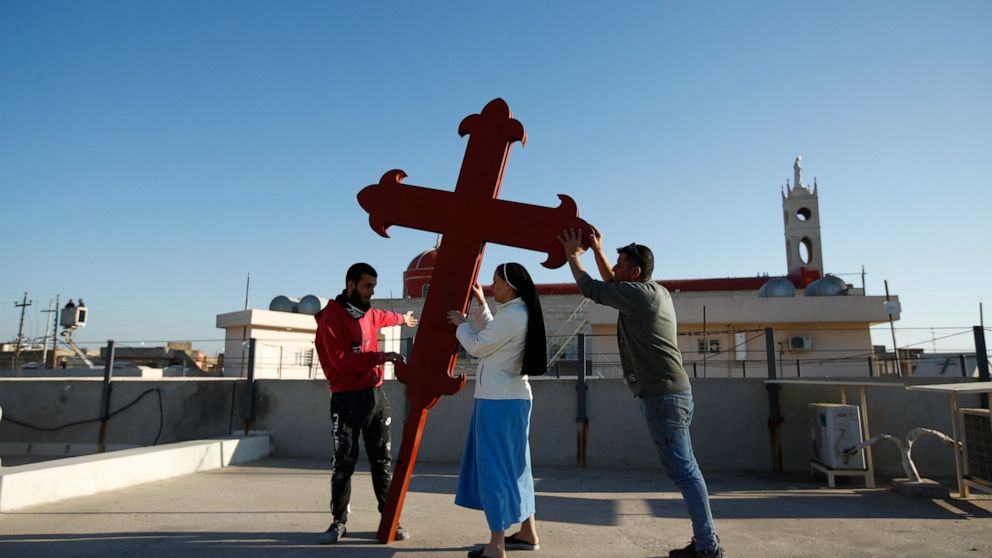 BAGHDAD -- In Iraq, two decades of back-to-back conflicts have left ancient Christian communities that were once a vibrant and integral part of the landscape scattered and in ruins.

Iraq was estimated to have nearly 1.5 million Christians before the 2003 U.S.-led invasion that toppled dictator Saddam Hussein. They date back to the first centuries of the religion and include Chaldean, Syriac, Assyrian and Armenian churches.

Now, church officials estimate only a few hundred thousand, or even less, remain within Iraq's borders. The rest are scattered across the globe, resettling in far-flung places like Australia, Canada and Sweden, as well as neighboring countries.

Many of those who remain in Iraq feel abandoned, bitter and helpless, some wary of neighbors with whom they once shared feasts and religious celebrations, Muslim and Christian alike.

The Vatican for years has voiced concern about the flight of Christians from the Middle East, driven out by war, poverty, persecution and discrimination. Pope Francis hopes that by visiting Iraq — the first visit by a sitting pontiff — he will be sending a message of hope and solidarity.

Here’s a look at disasters Iraq’s Christians have endured, from Saddam's ouster to the brutal campaign by Islamic State militants:

U.S. INVASION AND RISE OF MILITANCY

Christians in Iraq enjoyed protection and near-equal rights with Iraq’s Muslim majority under Saddam but were among the first groups targeted amid the breakdown in security and sectarian bloodbath that prevailed for years after the 2003 U.S.-led invasion that overthrew him.

The U.S. occupation and the chaotic years that followed ushered in the rise of religious militancy, with the al-Qaida terror network taking the lead. Killings, kidnappings and bombings became an everyday occurrence, sometimes with multiple bombings on the same day.

A Chaldean Catholic archbishop was found dead in 2008 after being abducted by gunmen. Churches around the country were bombed repeatedly by Sunni militants, terrorizing the community and setting off an exodus that continues to this day.

On October 31, 2010, Islamic militants seized a Baghdad church during Sunday evening mass, killing dozens of people, including two priests, in a terrifying four-hour siege. It was the deadliest single assault ever recorded against Iraq’s Christians.

The Islamic State of Iraq, an offshoot of al-Qaida, claimed responsibility for the attack at the Our Lady of Salvation Catholic Church, where Pope Francis is expected to pray this weekend. The carnage deepened the mistrust between the beleaguered community and its Muslim neighbors and fueled the Christian flight from Iraq.

To this day, the memory of the massacre is etched in the minds of Iraq’s Christian community.

In the summer of 2014, fighters belonging to the Islamic State of Iraq and the Levant swept over the northern city of Mosul and seized a broad swath of the country, including towns and villages in the Nineveh plains of northern Iraq.

Thousands of Christians found themselves fleeing once again the militants’ advance, taking refuge in Iraq’s northern Kurdish region or leaving the country. Over the next few years, the extremists killed thousands of Iraqi civilians from a variety of religions. They also destroyed buildings and ruined historical and culturally significant structures they considered contrary to their interpretation of Islam. Militants from the Islamic State group demolished religious and historic sites, including monasteries, mosques, tombs, shrines and churches in Syria and Iraq.

The IS juggernaut and the long war to drive the militants out left ransacked homes and charred or pulverized buildings across the north. Christians in the Nineveh plains fled the IS onslaught and many of those who returned dream of resettling abroad.

One company's quest for an antibody drug to fight COVID-19

abcnews.go.com - 4 months ago
Companies are testing drugs that mimic the way the body fights COVID-19, hoping they can fill a key gap as vaccines remain months off for most people
Read More

UN: 74 migrants drown after boat breaks down off Libya coast

abcnews.go.com - 5 months ago
The U.N. migration agency says at least 74 migrants have drowned after a Europe-bound ship broke down off the coast of Libya
Read More

abcnews.go.com - 4 weeks ago
Governor candidate in southern Mexico will be a man two women accused of rape.
Read More

abcnews.go.com - 3 months ago
Australia has changed one word in its national anthem to reflect what the prime minister called the spirit of unity and the country’s Indigenous population
Read More
More News & Articles