La Niña could supercharge this year's tornado season, just like it did to deadly effect in 2011

A massive cold air outbreak over the central US in early February set hundreds of cold temperature records, stretching the power grid in Texas and leaving millions without power.
Author:
Published: 2021-03-06 03:05 am 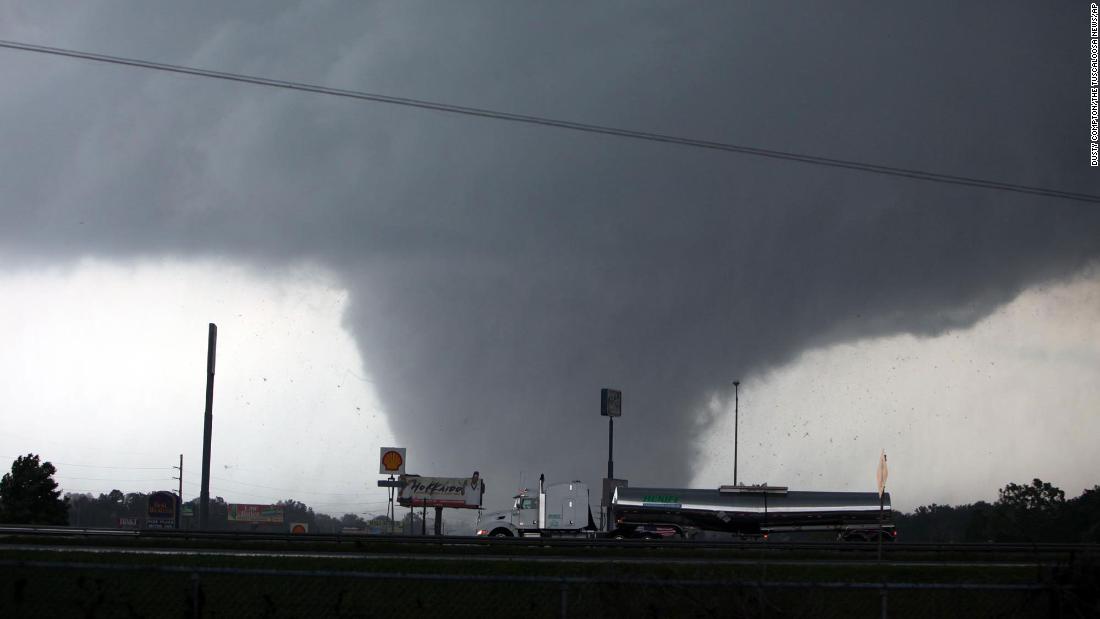 (CNN)A massive cold air outbreak over the central US in early February set hundreds of cold temperature records, stretching the power grid in Texas and leaving millions without power.

The year was 2011, when a moderate La Niña weather pattern and an active jet stream generated the scenario that's almost identical to what we've experienced so far in 2021.

The weather events that followed 2011's extreme cold snap now have meteorologists concerned that the US could be in for above-normal tornado activity this spring.

The past few months have seen the strongest La Niña signal since the winter of 2010-2011. So, the question is whether this spring continues to mirror that year, which ended up the costliest on record for tornadoes and the deadliest in nearly 100 years.

"What we can say instead is whether the probability of the ingredients coming together for these events is higher or lower than normal: This year, it is higher than normal."

The remarkable tornado season of 2011 was the deadliest in modern times, with over 550 fatalities -- second only to 1925's total of 794 tornado deaths.

Almost all the deaths in 2011 occurred during the extremely active months of April and May. That April alone saw 875 confirmed tornadoes, more than any month on record. The Super Outbreak on April 27 recorded 226 tornadoes, the most tornadoes ever observed on a single day, including destructive twisters in Birmingham and Tuscaloosa, Alabama.

Just a few weeks later, Joplin, Missouri was hit with a top-scale EF5 tornado that killed more than 160 people. It was the deadliest tornado in over 60 years, as well as the costliest tornado on record, with nearly $3 billion in direct damages.

"Looking back on 2011, it was the sheer magnitude of the number of events, the fact that so many hit populated areas and, of course, the incredibly high toll in terms of deaths, injuries and dollar damage," said Bill Bunting, chief of forecast operations for the National Weather Service's Storm Prediction Center (SPC).

While localized and small-scale weather features played roles in setting up both of these tragic days, the overall large-scale weather patterns that fed into the historic 2011 tornado season are worth looking at to determine the risk for similar days this year.

"Every year has some potential (of tornado outbreaks); it's just a matter of trying to accurately predict, with as much lead time as possible, where that area is likely to be and then making sure that people are prepared and have a plan," Bunting said.

To paint a picture of what the coming weeks' to months' weather may look like, forecasters look to La Niña and other global climate and weather patterns, such as the Arctic Oscillation (which is different than the polar vortex), to craft what are called subseasonal forecasts.

Lillo runs one of these models that "focuses on the slow, predictable parts of the atmosphere" to create forecasts several weeks in advance. Prediction models like it are important for things like seasonal forecasts of temperatures, which are used in energy trading markets, and hurricane season forecasts released each year by the National Oceanic and Atmospheric Administration (NOAA).

Lillo's model recently predicted -- with a month of lead time -- the Arctic outbreak that gripped the central US this February. Now, the focus shifts to what these long-term patterns could reveal as we head into the spring severe storm season.

"In general, the forecasts are showing ridging with above-normal temperatures in the South, cooler to the north, and that temperature gradient enhancing the jet stream across the center of the US," Lillo said. (The jet stream is the main storm track across the middle latitudes of the Northern Hemisphere and divides colder air to the north and warmer air to the south.)

During La Niña, stronger temperature differences tend to develop between hot and humid air in the southern US and cooler, drier air to the north. This sets up a faster jet stream that can drive severe weather outbreaks.

In March, the southern US is historically the area where severe storms, including tornadoes, are more likely. Then, as the Northern Hemisphere begins to warm, the bull's-eye for tornadoes will shift west into the central US and eventually north into the northern Plains, come summer.

"The jet stream pattern is not unfavorable for severe weather as we get a little bit later into March and certainly beyond," Bunting said. "If that pattern holds, very strong wind fields down across the Gulf Coast in proximity to warm, moist air suggest that the Gulf Coast in the near-term may be an area to watch closely."

How La Niña relates to tornadoes

Similar to this year, a moderate La Niña was the main feature in 2011. La Niña, and its counterpart, El Niño, can play a significant role in the position of the jet stream, temperature and precipitation patterns over the US, which all play a role in the formation of severe weather.

The El Niño or La Niña conditions in winter months can be used to help pinpoint the tornado frequency during the peak of severe storm season in the spring, recent studies have found.

"The flow of warm, humid air from the Gulf of Mexico increases in strength during springs that follow La Niña, which produces the fuel needed to form storms," Jason Furtado, assistant professor of meteorology at the University of Oklahoma, said.

"The stronger flow increases the low-level wind shear that also favors the formation of tornadoes and hailstorms."

The past several months have featured the strongest La Niña since 2011, and this pattern is expected to continue to impact weather over the next several months, through the heart of severe weather season, according to NOAA's Climate Prediction Center.

While severe storms occur year-round in the US, the peak time for severe storm outbreaks is during meteorological spring, which includes March, April and May.

So far this year, there have only been 27 tornado reports, which is well below normal. Over the last 15 years, the US has averaged around 130 tornado reports through the first few days of March.

But it's not just tornado reports that are down. Hail and damaging wind reports are also below average so far this year.

"There have been many seasons that have started out quiet and did just the opposite," Bunting said.

2011 also started below average for both tornado and hail reports through much of March, according to data compiled by the SPC, before rapidly accelerating through the remainder of the spring.

The upcoming forecast relies on where the jet stream will end up in the coming weeks.

Now is the time to review your severe weather plans. Know where to find your daily local forecast. Have multiple ways of getting severe storm and tornado watches and warnings: via Wireless Emergency Alerts, NOAA Weather Radio, local news stations and more. And know where to shelter at home, work or school if a tornado strikes.

Advised Bunting: "This is the time of year where we need to start thinking a bit more about the potential for severe storms and developing that pre-event planning."

www.cnn.com - 4 months ago
The recent assassination of Iran's top nuclear scientist was carried out with the help of an "advanced electronic tool" guided by a "satellite device," according to Second Brigadier General Ramazan Sharif, spokesman for the Islamic Revolutionary Guard
Read More

Italian Prime Minister will resign amid pandemic and political turmoil

www.cnn.com - 3 months ago
Italian Prime Minister Giuseppe Conte will resign on Tuesday morning, his office said in a statement on Monday, heightening political turmoil in the country as it battles Covid-19.
Read More

www.cnn.com - 5 months ago
The family of Loujain al-Hathloul, a jailed Saudi women's rights defender believed by her relatives and advocacy organizations to be on hunger strike, has called on the G20 to demand that Saudi Arabia release the prominent activist.
Read More