Gary Sanchez may not just be on the bench when Gerrit Cole is on the mound in the playoffs. Manager Aaron Boone said Thursday on WFAN it would be a “day-to-day” decision during the postseason when it came to Sanchez and Kyle Higashioka behind the plate,
Author: Dan Martin
Published: 2020-09-24 08:19 pm 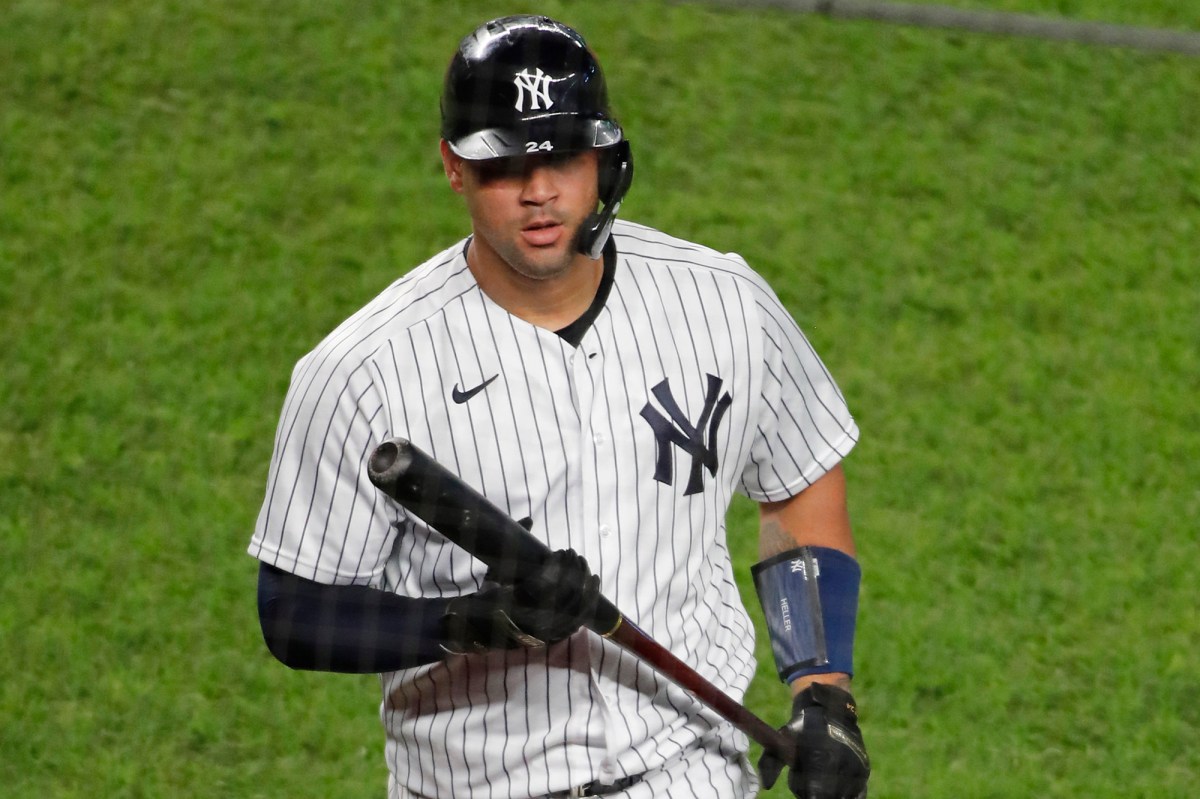 Gary Sanchez may not just be on the bench when Gerrit Cole is on the mound in the playoffs.

Manager Aaron Boone said Thursday on WFAN it would be a “day-to-day” decision during the postseason when it came to Sanchez and Kyle Higashioka behind the plate, and later in the day Boone made it clear why Sanchez’s starting job was in peril.

“Obviously, performance matters and matchups matter and pairing guys matter,’’ Boone said before the Yankees faced the Blue Jays in Buffalo, with Higashioka catching Jordan Montgomery and Sanchez not in the lineup.

“I think both will probably play an important role for us if we’re to go deep in this playoff,’’ Boone said of the two catchers.

The numbers when it comes to Cole are especially striking. Higashioka has caught the right-hander’s past four starts, and Cole is 3-1 with a 1.00 ERA while giving up just a pair of homers.

In eight games pitching to Sanchez, Cole has a 3.91 ERA and allowed a dozen homers.

Boone wasn’t ready to make any guarantees, despite the hints, saying “nothing is committed right now.”

“It’s hard to predict,’’ Boone said of the situation. “Even though we’re five or six days away from the postseason, that, in a lot of ways, is a long time in baseball. Things happen and change every single day. … I expect both guys to play a role.”

Still, it’s a steep fall for Sanchez, whose struggles on both sides of the ball have been hard to ignore.

He entered Thursday hitless in a dozen at-bats since his brief resurgence at the plate. And in Wednesday’s loss to Toronto, he went 0-for-4 with three strikeouts and made a pair of errors, giving him three in two games.

On the year, Sanchez is hitting just .143 with an OPS of .615. Though other advanced numbers are somewhat promising, like his exit velocity and barrel rate, they have not resulted in any success.

Higashioka, meanwhile, has been solid both at the plate and behind it, on a 6-for-12 tear with three homers in three games heading into Thursday.

“I wouldn’t say it’s a surprise,’’ Boone said of Higashioka’s development. “We had a very capable catcher in Austin Romine we lost to free agency. Part of the reason [for that] was our belief in Kyle Higashioka.”

Boone called Higashioka an “elite receiver with great hands behind the plate. He’s a guy with power at the plate that’s shown up this year, and he’s also really grown in his voice and presence in our clubhouse. … He’s performed really well for us since coming back from the IL.”

Less than a week ago, Sanchez seemed like he might be on his way to getting past his brutal start to 2020.

From Sept. 15-18, Sanchez had a four-game stretch in which he went 6-for-18 with two doubles, three homers and nine RBIs — and just three strikeouts in 19 plate appearances.

The progress didn’t last, as he’s whiffed four times in his past three games, and with the playoffs quickly approaching, the Yankees are finally ready to consider not penciling Sanchez’s name in the lineup in October.

nypost.com - 6 months ago
The DOE initially told the network that it would have to cough up the payment if it wanted to resume use of seven different sites for extracurricular sporting activities this year.
Read More

nypost.com - 3 months ago
It’s NFL playoff season, once again! Wild Card Weekend kicks off on Saturday, with three games on the docket: Colts-Bills, Rams-Seahawks, and Buccaneers-Washington. It’s a day full of football — here’s to how to catch all the action. Indianapolis Colts
Read More

nypost.com - 2 months ago
The Yankees’ twin behemoths might look less gigantic this year. On purpose, with the purpose of keeping them on the field more. Eric Cressey, the Yankees’ director of player health and performance, told the YES Network’s Meredith Marakovits in an intervie
Read More

nypost.com - 6 months ago
LSU’s title run didn’t change anything but the channel. The SEC has returned to its regularly scheduled dominance. No. 2 Alabama is the only undefeated team in the SEC West and already has demolished the division’s second-highest ranked team (Texas A&M),
Read More
More News & Articles