The pope spent the third day of his visit in the north of the country, where the Christian population is dwindling. He also prayed for the ethnic minority Yazidis, who were brutally targeted by ISIS. (Image credit: Andrew Medichini/AP)
Author: Alice Fordham
Published: 2021-03-07 08:23 am 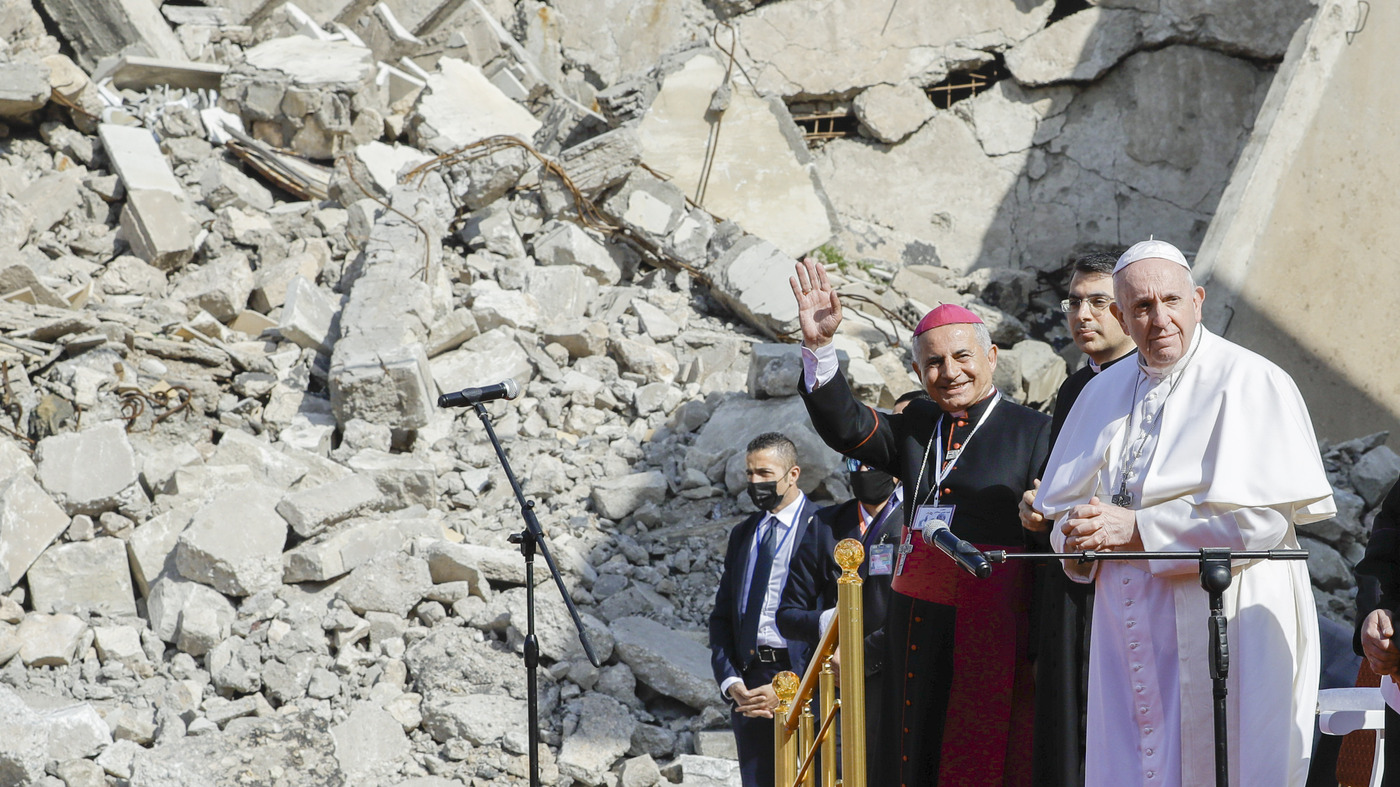 Pope Francis is spending the third day of his visit to Iraq in the north of the country, where an ancient Christian population is dwindling after the city of Mosul and the Nineveh Plains were shattered by militants from ISIS.

The pope led prayers in a Christian area of Mosul, where participants sang, prayed and held olive branches in a square still ruined by the devastating battles that unfolded in the country's second largest city.

Francis emphasized not just the forced displacement of many Christians but "harmonious coexistence," speaking of the assistance that Christians received from Muslims as they gradually returned to the city. He also prayed for the ethnic minority Yazidis, who were particularly brutally targeted by ISIS.

He then traveled to the largely Christian town of Qaraqosh, where the Church of the Holy Immaculate Conception was gutted by ISIS but has been renovated ahead of his visit. Francis will be the first to lead prayers in the newly-finished church, the Rev. Ammar Yako told NPR.

Christians in the Nineveh Plains area trace their roots back almost as far as the time of Jesus, but many had left even before ISIS tore through the area in 2014. Despite the rebuilding of Christian areas and help from international aid and Christian charities, many are reluctant to return, fearing the extremists could come back.

John Pontifex, of the charity Aid to the Church in Need, said the papal visit could strengthen people's resolve to stay or return.

"Given the length of their history and unbroken record, or presence, stretching right back to those early, early days, for the pope to come in the midst of that is very important," he said.

Father Boulos Thabet Habib, a Chaldean Catholic priest in the village of Karemlash traveled to nearby Mosul to participate in the prayers there. A choir from his church, Mar Addai, sang and a cross placed in the square was made of wood from his and other churches burned by ISIS.

Rev. Thabet, as he is known, said that the pope's visit would recognize the work of the local church in rebuilding broken communities and burned churches since ISIS was pushed back from the area.

About half of the population has returned to Karemlash, he said. Others remain displaced in Baghdad or in the Kurdish north of the country.

"We hope all the families living in Kurdistan and in Baghdad as refugees will return back to Karemlash soon," he said, seeing the papal visit as an encouragement. "We hope after the visit of the pope, many of them will return back."

The papal visit will, "encourage the Iraqi people to be brothers," he said.

Francis has one day remaining on his visit to Iraq — the first ever papal visit to the predominantly Muslim nation. On Saturday, he traveled to the ancient site of Ur, believed to be the birthplace of Abraham, where he preached a message of unity among different religions. He also visited with the Grand Ayatollah Ali al-Sistani, Iraq's top Shiite Muslim cleric, in the city of Najaf. The pope will attend a farewell ceremony in Baghdad on Monday before returning home.

Losing A Wife, Mother: Going Through Grief Separate From The Pandemic

www.npr.org - 4 months ago
Debbie Williams died in April of non-COVID-19 related causes. NPR's Rachel Martin talks to Scott Williams, Debbie's husband, and Andy Williams, their son, about losing a loved one during a pandemic.
Read More

www.npr.org - 3 months ago
Kremlin critic and opposition leader Alexei Navalny was detained shortly after landing in Moscow on Sunday, months after he was poisoned by a rare nerve agent.
Read More