Knicks power forward Julius Randle didn’t pull off a triple-double, but he pulled off the triple crown at All-Star Sunday. He competed in the Skills Competition, was used as a prop in the Slam Dunk Contest and played 13 minutes in his first All-Star Game.
Author: Marc Berman
Published: 2021-03-08 12:15 am 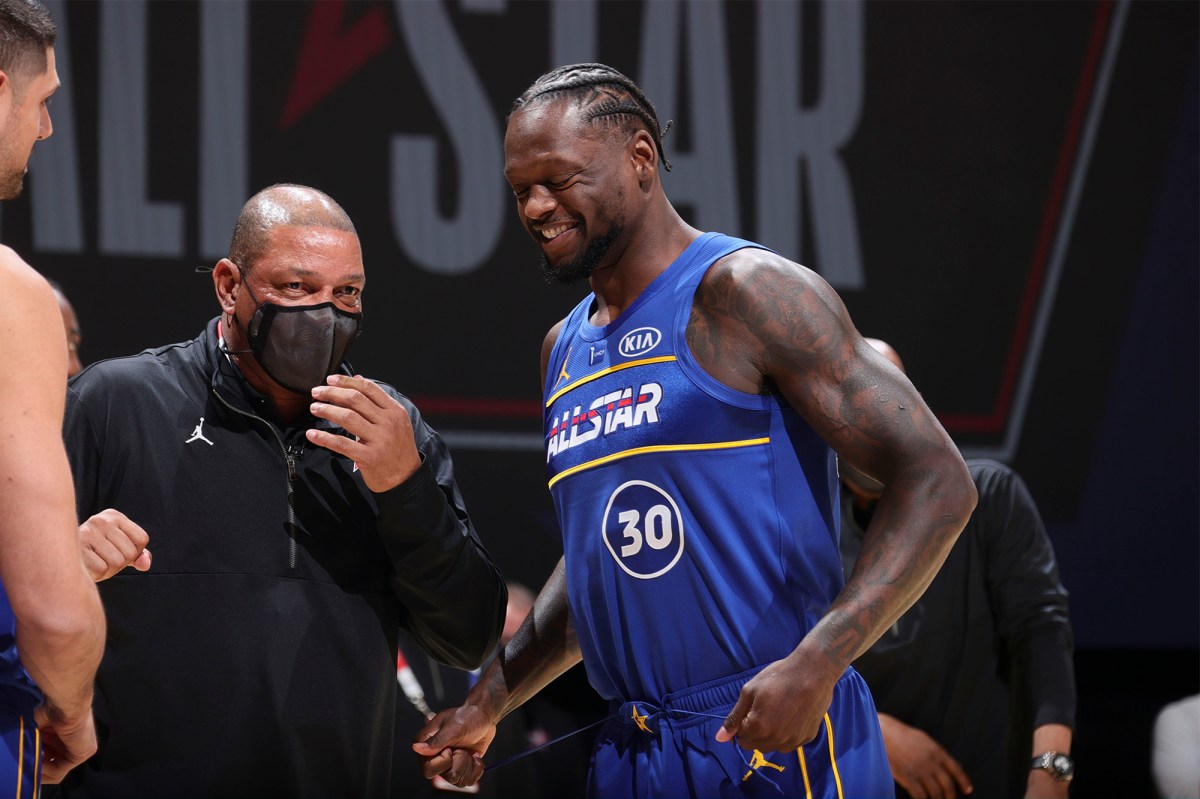 Knicks power forward Julius Randle didn’t pull off a triple-double, but he pulled off the triple crown at All-Star Sunday.

He competed in the Skills Competition, was used as a prop in the Slam Dunk Contest and played 13 minutes in his first All-Star Game.

In limited action in the main event, Randle scored two early buckets — one on a driving powerhouse dunk — for four points and tossed an alley-oop pass to Donovan Mitchell for a dunk.

After playing in all 38 of the Knicks’ games and leading the NBA in total minutes, he was fine taking a backseat as his Team Durant suffered a 170-150 loss to Team LeBron.

“It was great. Definitely everything I imagined to be part of it. I had a lot of fun, [was] excited. It’s something I want to be part of a lot more. It was a great experience, the conversations. It’s an experience I’ll never forget — the first one.’’

At halftime Knicks rookie Obi Toppin summoned Randle to stand alongside his father so he could leap over the two of them.

Last March 11, Randle was at a low point when he realized his first season as a Knick had ended because of the pandemic, cut short of turning his disappointing season around.

Flash forward a year later, and Randle and family were in Atlanta this weekend. His wife Kendra, whom he met at Kentucky, and son Kyden, now 4 years old, sat courtside at State Farm Arena on Sunday night.

That’s how fast life can change as a Knick.

“He’s enjoying it,’’ Randle said of his son. “He definitely knows it’s something that’s not normal and cool. He’s definitely loving that. He loves walking around saying he’s an all-star kid. He’s enjoying it.’’

Knicks coach Tom Thibodeau said entering the All-Star break Randle is playing like an “All-NBA player.” Three All-NBA teams are announced after the season and Randle’s numbers — if they keep up — could easily get him there if the Knicks make the playoffs.

Randle, 26, admitted on a recent podcast he cried when learning coaches had voted him as an All-Star reserve for the Eastern Conference.

“It was more, as much as being named All-Star, it was more the journey,’’ Randle said Sunday. “Appreciate the seven years so far in the league, the journey and process, year after year and the grind, hard work, sacrifice, commitment through the process. It made me reflect and appreciate that process more than anything.’’

The Knicks are in fifth place in the East thanks to Randle’s ironman will.

He hasn’t missed a game. He has averaged 23.2 points, 11.1 rebounds and 5.5 assists. He has spent the past two weeks in profound thought on how he was so disappointed in himself failing as a leader in his first season during last season’s Knicks mess.

Now you can call the Knicks leader, Captain Randle, though Thibodeau doesn’t believe in bestowing titles.

“It means a lot — it’s a responsibility I truly enjoy,’’ Randle said. “A lot of things about my way of leadership is to be vocal, but I try to lead by example — how I approach work and study the game. Do the things the right way. It’s a great responsibility I love to have. Hopefully in the second half I’ll continue to do that and be the best leader I can. Hopefully, it translates to wins.’’

nypost.com - 2 weeks ago
What’s Opening Day in The Bronx without worrying about the weather? While Thursday’s forecast may not be as bad as in 2018, when the Yankees got snowed out on Opening Day, it does call for rain, wind and a high of 49 degrees, according to the National
Read More

nypost.com - 7 months ago
President Trump on Monday asked a reporter to remove his mask while asking a question, but the journalist instead offered to speak louder. Trump told Reuters reporter Jeff Mason that his face mask “muffled” his question during an outdoors North Portico
Read More

nypost.com - 5 months ago
Immigrant advocacy groups, while happy that President Trump was defeated, do not plan to give his successor an easy time.
Read More

nypost.com - 4 months ago
For two weeks, Seton Hall couldn’t practice. It was quarantined, the result of several positive COVID-19 tests, which included one for coach Kevin Willard. A week after getting out of quarantine, the Pirates began a stretch of five games in eight days in
Read More
More News & Articles