Three professors at the University of South Alabama have been placed on leave after photos surfaced of them wearing and holding racist symbols at a campus event in 2014, according to a statement from the school.
Author:
Published: 2021-03-09 01:16 am 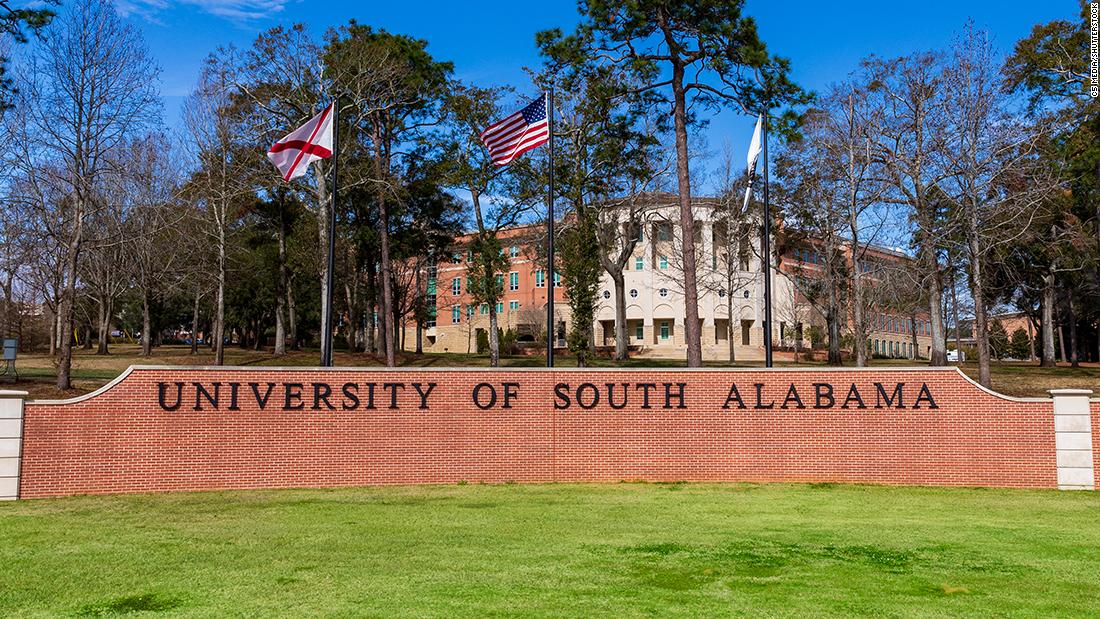 (CNN)Three professors at the University of South Alabama have been placed on leave after photos surfaced of them wearing and holding racist symbols at a campus event in 2014, according to a statement from the school.

In two photos verified by university spokesperson Lance Crawford, one professor is pictured wearing a Confederate soldier's uniform, while two other professors posed with a whip and noose.

According to a college statement, the photos were taken at a campus costume party held at the Mitchell College of Business.

University students created an online petition calling for their firing. It has more than 3,000 signatures.

"The fact that these professors are still currently employed by the University shows a deep failure to commit to a safe, welcoming environment for students of all backgrounds," the petition said. "Racism cannot simply be given a slap on the wrist. It must be addressed as the serious issue it is. We cannot have professors who partake in this kind of behavior."

"The actions taken in response to these pictures, which were brought to the attention of University leadership in 2020, should have been stronger and broader, and should have more clearly demonstrated our unwavering commitment to a safe and welcoming environment for every member of our community," he said in a statement last week. "We acknowledge that, in our response to this incident, we failed in our obligations and responsibilities to our students, our employees and our community. For this, we are deeply sorry to everyone who is rightfully hurt and offended by these images."

"It is my goal to conduct an independent, unbiased investigation so that the leadership for the University of South Alabama will be in the best position to make an informed decision," Williams-Maynard told CNN.

Of the three teachers involved in the photo, two issued statements through the university.

"Seven years ago, I rented and wore a last-minute costume that was ill-conceived to a faculty and student Halloween costume contest, at which I served on a panel of judges to select the winners," Wood said. "I sincerely apologize and am sorry for doing so and ask for forgiveness for this error in judgment."

"I regret the decision, and I understand the hurtful nature of these symbols, which do not reflect my beliefs. Working at the University of South Alabama, guiding students through their academic careers, and having a positive impact on them as they prepare for their next steps in life has been one of the greatest honors of my professional life," Wood continued. "I have learned from this error, and I am committed to doing better in the future."

Sharland said, "In retrospect, I can see why someone might find the image hurtful, and I regret this attempt at humor that clearly failed. It was not my intent to hurt or be offensive, and if anyone is offended by this picture I apologize."

"It was not my intent to offend, and I have learned from this experience," Sharland added.

CNN has reached out to the third teacher, Teresa Weldy, for comment but did not receive a response.

Delta cuts back on how far you can recline that seat

www.cnn.com - 2 years ago
As I flew Delta Air Lines from Chicago to Atlanta on Thursday in coach, I spent a few minutes guessing if the tall man in front of me would recline his seat.
Read More

The risk of 'contagion' after suicides is real

www.cnn.com - 3 years ago
American fashion designer Kate Spade was found dead in her Manhattan apartment in an apparent suicide on Tuesday. Then on Friday morning, CNN's Anthony Bourdain, the chef and storyteller who took viewers around the world in"Parts Unknown,"was found
Read More

'Insurrection,' 'coup' and 'sedition.' Here's what each term means

www.cnn.com - 3 months ago
In the wake of Wednesday's attack on the Capitol building by a pro-Trump mob, US elected officials, world leaders and commentators have condemned the actions of the President and those who participated.
Read More

www.cnn.com - 2 years ago
Wannabe vampires, beware: The US Food and Drug Administration warned Tuesday against using plasma infusions from young blood donors to ward off the effects of normal aging as well as other more serious conditions. Plasma, the liquid portion of the blood,
Read More
More News & Articles