The Return of High Schools in New York City

Students who signed up for in-person learning can go back later this month, and all students can resume sports.
Author: Juliana Kim
Published: 2021-03-09 05:15 am 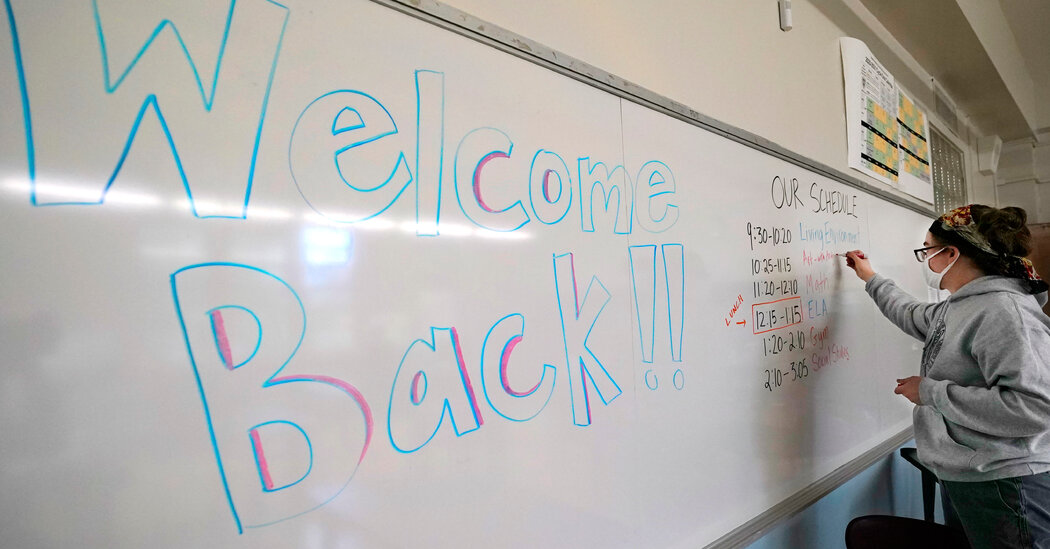 Weather: High around 60, with clouds giving way to sun. It’ll stay balmy for the next few days.

With only a few more months left in the school year, tens of thousands of high school students in New York City will be allowed back in classrooms in the coming weeks.

Mayor Bill de Blasio announced that about 55,000 high schoolers who signed up for in-person classes last fall will be able to return to school buildings starting March 22. The announcement marks the final step in reopening the city’s school system after its mass closure in November due to rising coronavirus cases.

“We have all the pieces we need to bring high school back, and bring it back strong,” Mr. de Blasio said at a news conference on Monday.

Before the systemwide shutdown in November, some high school students had attended in-person classes for about six weeks. Many of them had only a couple of days of in-person learning.

But this time, about half of the city’s 488 high schools will offer in-person instruction five days a week. The other half will return to a hybrid model. Still, most high school students — roughly 227,000 — will continue to learn fully remote, mainly out of lingering concerns about the virus.

Next month, high school sports will also restart and run through the summer. All students, including those learning remotely, will be allowed to play.

One reason high schools were the last to reopen was a lack of testing capacity. Another reason was that some high schools have been used as vaccination centers for New Yorkers.

Overseeing the reopening of high schools will be the first major task for the incoming schools chancellor, Meisha Porter, who will officially assume the role on March 15.

On Monday, Mr. de Blasio repeated his vow to fully reopen schools for instruction five days a week next school year. Remote learning will also remain an option, the mayor said, but he wants to eliminate hybrid instruction.

“What I can tell you is we intend to be able to accommodate every single child, every family that wants their child back in school in September,” Mr. de Blasio said Friday in a radio interview on WNYC. “That’s the vision we’re working on.”

Cuomo Inquiry to Be Led by 2 Lawyers, Including Ex-U. S. Attorney

Late last month, Gov. Andrew M. Cuomo cleared the way for movie theaters in New York City to open with limited capacity and other restrictions, bringing cinemas in the five boroughs in line with those in the rest of the state.

On Friday and over the weekend, movie lovers returned to reclining seats, surround-sound environments and concession stands wafting the smell of buttered popcorn to enjoy movies on the big screen around New York City for the first time in almost a year.

“It felt good to be back,” said Nelly Zambrano, 68, of the Bronx, who brought two of her friend’s daughters to see “Raya and the Last Dragon” at the AMC Lincoln Square 13. “I’ve been looking forward to this because it gives me hope that things are coming back, a little bit, to normal.”

Despite the anticipation, last weekend was a far cry from a “Star Wars” premiere. At the Linden Boulevard Multiplex on Saturday afternoon, about two dozen cars were parked in a lot with hundreds of spaces. In Manhattan at the IFC Center around the same time, no one bought a ticket at the window for almost an hour.

Even without major foot traffic, however, there were subtle signs across the city that the movie theaters had reawakened from their enforced slumber.

At the AMC 84th Street on the Upper West Side, a poster that had long advertised “Mulan” — a movie that had been scheduled for release last March and streamed in the fall — was finally removed and replaced.

In Times Square, red flags outside the AMC Empire 25 declared the venue “NOW OPEN!” even as the ticker at the Regal Cinemas across the street displayed the message “Temporarily Closed.”

It was some years ago, and my girlfriend and I — we’re married now — were living in Murray Hill. We were both fairly new to New York at the time.

One Saturday morning, we heard music and loud noises coming from somewhere nearby, so we went out to investigate. It turned out that there was a large street fair going on. We wandered around for a while, enjoying the festivities.

Soon, it was lunchtime. We went to one of the booths and bought our first-ever gyros. We were stunned at how good they were. The combined taste of the meat and the sauce and the bread was simply sensational.

After a bit, we headed back to our apartment and hung out there for the rest of the afternoon. When it was time for dinner, I asked my girlfriend what she wanted to eat. She looked at me, and we both started to laugh.

Without another word, we were back at the festival having gyros again.

What We Know About Tiger Woods' Car Accident

www.nytimes.com - 2 months ago
Woods was said to have been driving at a “greater speed than normal” when his S.U.V. went over a median strip and rolled over several times.
Read More

www.nytimes.com - 7 months ago
European allies are skeptical of Secretary of State Mike Pompeo’s push to elevate religious liberty and property rights, which they fear could come at the expense of protecting marginalized groups.
Read More

E.U. Border Agency Pulls Out of Hungary Over Rights Abuses

www.nytimes.com - 2 months ago
The decision by Frontex comes after Hungary disregarded a ruling by the E.U.’s top court that the way the country handles asylum seekers violated the bloc’s law.
Read More