A granddaughter came to her grandmother's apartment bearing a unique gift -- it was a prescription for a hug.
Author:
Published: 2021-03-12 07:48 am 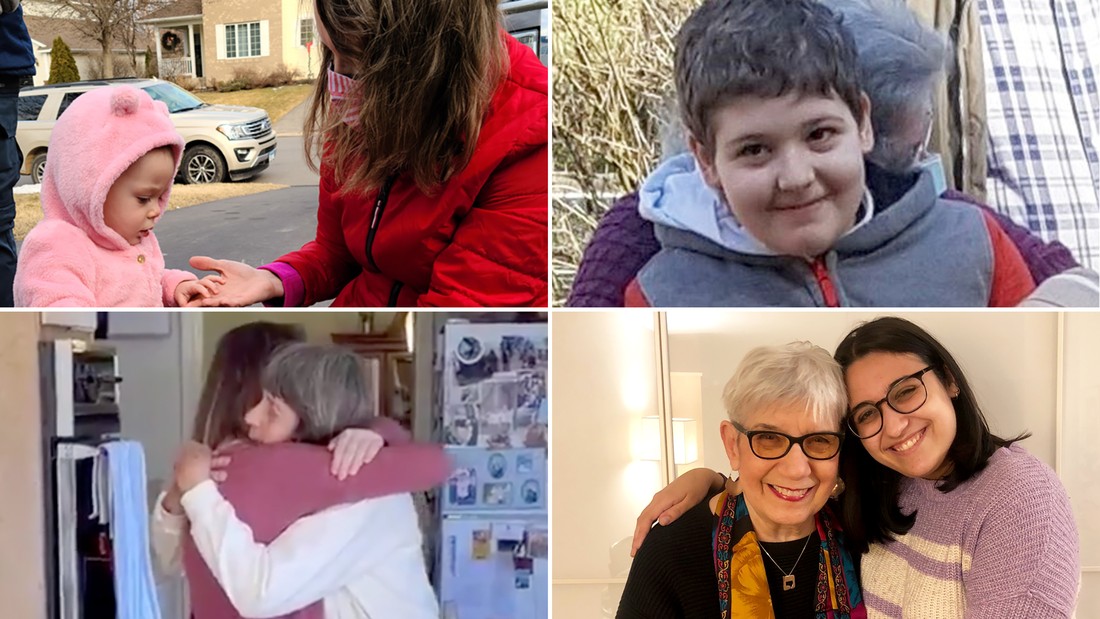 (CNN)A granddaughter came to her grandmother's apartment bearing a unique gift -- it was a prescription for a hug.

It had been a year since Evelyn Shaw had hugged anyone, let alone granddaughter Ateret Frank. Yet, Shaw said she wasn't going to let her granddaughter into her Bronx apartment, even though both had been fully vaccinated against Covid-19.

The prescription, which Frank got her grandmother's doctor to write, read, "You are allowed to hug your granddaughter." It was just the nudge Shaw needed to reclaim a part of her life that she loved so much.

"I was stuck in Covid land and having this prescription from my doctor gave me the courage to let her in," Shaw told CNN's Brianna Keilar. "There we were, standing in my apartment just hugging and hugging and crying and crying for the first time in a year, which was an out-of-body experience. It was blissful."

Earlier this week, the Centers for Disease Control and Prevention released evidence-based guidance for people who have been fully vaccinated against Covid-19. Grandparents can hug their unvaccinated grandchildren, especially if they are local, as the CDC still says people should avoid travel.

Now, as many grandparents have received their doses of the Covid-19 vaccine, a small part of the world is starting to feel right again.

We spoke with a few lucky grandparents on what it was like when they were reunited with their grandchildren. These are their heartwarming stories.

She will remember this for the rest of her life

Evelyn Shaw spent the last year without a warm embrace or touching anyone.

The widow lives by herself and missed the frequent visits of her granddaughter and daughter Laura Shaw Frank.

When the long-awaited hug finally happened on March 1, Shaw and her 23-year-old granddaughter cried as they embraced.

"It was wonderful, and it was something I'm going to remember for the rest my life," Shaw said. "I want to thank the doctor for writing this prescription."

Even though the hug felt "incredible," Shaw's granddaughter, Ateret Frank, said she was nervous even though she had received both of her vaccine shots.

"Having that prescription in my hand, it sort of -- it felt like a permission slip to be able to hug my grandmother and then once I did it, it felt natural, felt like a relief and I immediately started crying," Frank said.

Getting back to things that were once so normal, such as giving giving a loved one a hug, will take some time to adjust to.

"We're all going to need to transition from the fear that we have lived with for so long," Shaw said.

They got an unexpected hug from behind

As one family in central North Carolina eagerly waved at each other from across the yard, just like they have all year, a grandmother made a snap decision as she stood there with her husband. She asked their grandchildren to walk backward toward her.

"My mom suddenly made an unexpected request," Deana C. wrote to CNN. "She asked our children to walk backwards to them, one at a time, so that she could put her arms around them for just a moment and hug them. I was so surprised, because we haven't been anywhere near each other in over a year."

Looking across the lawn at her 11-year-old son, Eli, getting the hug, brought her joy, Deana said. All three of her children got to hug their grandmother as their grandfather watched on March 7.

Deana, 47, said her parents are in an at-risk age group and there are members of the family who have preexisting conditions. They have diligently taken precautions, she added.

"We've missed out on so much over the past year, but the sacrifice of distancing ourselves from loved ones pales in comparison to the thought of losing them to Covid-19," she said.

While it's been hard not to hug and be close with her parents, who only live a few towns over, Deana said it's the sleepovers, the family dinners and just being with their grandparents that her kids miss the most.

"The children are growing so quickly, and the grandparents are missing out on their changes and milestones," she said. "Frequent phone calls, even FaceTime, are a poor substitute for the actual presence of loved ones."

Her parents started feeling safer once they had received both doses of the vaccine and enough time had passed for them to build immunity, she said.

"I was overwhelmed with joy at the sight of my child and my mom hugging for the first time in over a year," Deana said. "I wanted to share this moment to shine a little light during a dark time and encourage others to stay vigilant."

They only touched hands through glass

For six months, Lanae Paaverud and her husband would visit with their three grandchildren by standing outside a glass storm door.

Even as the temperatures in Shakopee, Minnesota, dipped below zero, the grandparents came almost every Sunday for their porch visit. "We bought snow pants and warmer jackets so we could bear even 15-20 minutes (outside)," Paaverud wrote.

They looked forward to the tender moments of seeing their 13-month-old grandchild, Clara, look at her Bubu and Yogi.

"Since we could not hug or hold the grandbabies, we would put our hands (later our gloved hands), on the glass with each of them," Paaverud wrote. "We would make little games of it, with peek-a-boo, follow-the-hand, etc. to get her to smile and enjoy the interaction."

This past Sunday, the grandparents double masked and used a disinfectant spray on their clothes to be able to see their grandchildren. Paaverud's children had Covid-19 a few months ago and the family figured they have antibodies. Paaverud, 55, and her husband are not yet eligible to get their vaccines.

"We helped with the first four to five months of her (Clara's) life. My daughter worried that she wouldn't remember her grandparents," Paaverud said. "She recognized our voices and our eyes, even though we were wearing masks."

Bubu and Yogi got to come face-to-face with their grandchildren. Their hands touched again like they had done in-person.

"It was a beautiful moment," Paaverud wrote. "I had put my hands out to help her walk (she is just learning), and she instead started touching my hands with her usual soft curiosity, checking out the hands she had only seen on the glass the last six months."

A granddaughter got best birthday present of all

Sarah Stevens' grandmother is among the people at the center of her life, as she helped raise her. She and her grandmother, Caroline, both live in Phoenix.

"My grandma has always been one of my biggest supporters," Stevens wrote to CNN. "She helped raise me, and was my rock after my mom (her daughter) passed away a few years ago."

Stevens said it was difficult to go from seeing her grandma one afternoon a week to only being able to see her from afar.

But for her 28th birthday on February 21, Stevens got a priceless gift.

Stevens was part of a clinical trial for one of the vaccines in 2020, so she was already vaccinated. As luck had it, her grandmother had full immunity by her birthday.

"It was our first time together in her house and hugging," she said. "It was the best gift I could have received to know I could safely hug her again."

Their hug is on the horizon

The Bonta family of Alameda, California, is counting down the days until they get to hug their grandmother this weekend.

"We're planning a special dinner for my mom/my kids' Lola and her two grandkids, Iliana and Andres, for this Saturday, the first day my mom is eligible to do that," Rob Bonta wrote. "I expect there to be some big, long hugs at this dinner!"

The state assemblyman said no one in the family has hugged his mother in over a year. He knows his family is not alone in their sacrifice.

"I know my family's experience is not isolated, and is likely widely shared by many loving grandparents and their grandkids, who so look forward to those special occasions to get together," he wrote.

The family visited their Lola, a term of affection, outside at a distance with masks on for holidays and milestones such as Christmas, birthdays and Mother's Day, he said.

Grandmother Cynthia Bonta, 83, brings the children gifts with a mask on to show them she loves and is thinking of them.

"When I saw that vaccinated grandparents can interact maskless and indoors with their grandkids who they haven't seen for over a year, it warmed my heart to think of all of the hugs, smiles, laughter and happiness grandkids and grandparents would soon be experiencing together," he wrote.

The tough times are still with us, but hope is on the horizon.

"And even while we endured the storm, we remained hopeful and optimistic, and now, having persevered, we can step from the shadows into the bright light ahead," Bonta said.

www.cnn.com - 1 month ago
Attorney General Merrick Garland announced on Friday that the Justice Department is rescinding a Trump-era memo that limited the use of consent decrees that hold police departments accused of misconduct accountable.
Read More

www.cnn.com - 8 months ago
Residents of eight cities were alerted to a brain-eating amoeba found in a southeast Texas water supply.
Read More

www.cnn.com - 2 months ago
Distribution of White supremacist propaganda reached the highest amount ever recorded since the Anti-Defamation League began tracking it, the group said in a report released on Wednesday.
Read More

Ready to cut your long, quarantine hair? Consider donating it to charity

www.cnn.com - 6 months ago
As people stay home and skip the salon or barbershop, some hair-focused non-profits are seeing one bright spot in the pandemic: more donated hair going to those who need it.
Read More
More News & Articles