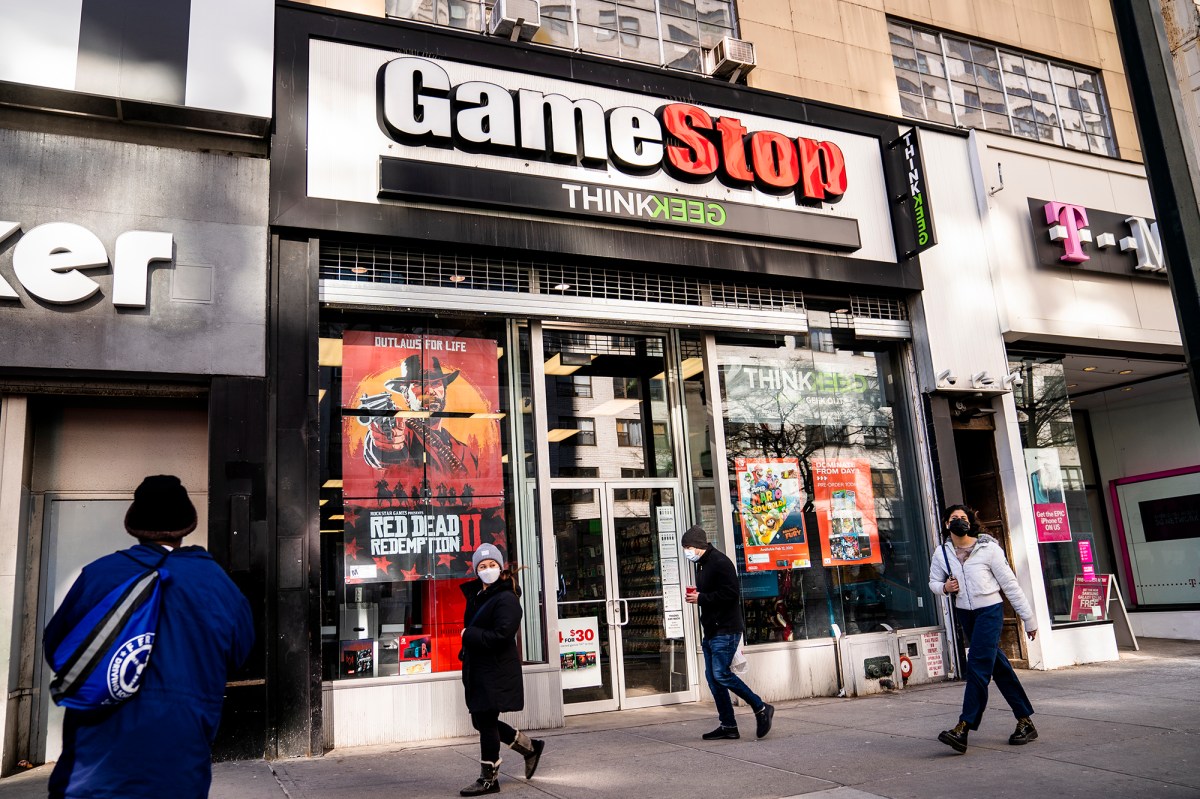 Shares in the struggling video-game retailer had surged in early trading, rising about 7 percent after the opening bell, but then reversed the gain to plummet nearly 16 percent to $223 around 11:20 a.m.

The sudden drop reportedly caused trading on GameStop to be halted for volatility before the stock recovered in the early afternoon. It was recently off about 5.5 percent at $250.01 as of 1:34 p.m.

The whipsawed session came after a week in which GameStop’s share price surged 92 percent and reached heights not seen since the late-January market frenzy that shook Wall Street.

Monday’s wild moves didn’t faze many rookie traders on Reddit’s WallStreetBets forum, which has made the Texas-based chain synonymous with the retail investing revolution.

Some users said they planned to snap up GameStop shares with the $1,400 stimulus payments — or “stimmy” checks — that the feds started dropping in Americans’ bank accounts over the weekend.

“Jokes on the hegies, this volatility makes me feel alive,” one Redditor named __Cofi__ wrote Monday, misspelling a slang term for hedge fund investors. “Buying another 5 shares. And my stimmy hasn’t even arrived yet!”

The posts echoed a recent Deutsche Bank survey that reportedly found about half of retail traders between ages 25 and 34 planned to put 50 percent of their stimulus cash into stocks.

GameStop’s stock price also moved like a roller coaster last week but ended up posting strong gains after the company announced it had tapped Chewy.com founder Ryan Cohen to lead its shift into e-commerce.

Bulls believe Cohen, who joined GameStop’s board in January, will help transform it from a beaten-down brick-and-mortar retailer into a successful digital gaming business.

Traders on social media have tried to glean hints about Cohen’s role in the company from his cryptic Twitter posts. The most recent one, posted Thursday evening, featured a GIF of Jeff Daniels’ character from the 1994 film “Dumb and Dumber” sitting on a toilet with his pants around his knees and feet in the air.

nypost.com - 6 months ago
Marvel is getting ready to shoot the second installment of the “Black Panther” franchise after the sudden passing of its star Chadwick Boseman. Shooting will begin in Atlanta in July, 2021, and will last about six months, according to an exclusive report
Read More

nypost.com - 1 week ago
About 15 minutes into Joe Biden’s first major speech as president of the United States, I e-mailed my editors at The Post and said, “I think he’s delivering it beautifully. It’s quiet and intimate and ­intense.” Forty-five minutes later, I sought to
Read More

nypost.com - 7 months ago
A man was stabbed to death by a group of men while attending a birthday party in Las Vegas, police said. Cops responding to a report of a man stabbed at The Grandview at Las Vegas early Sunday found a man in his 30s with multiple stab wounds in the
Read More

nypost.com - 2 months ago
After a while, Nolan Richardson wasn’t even angry any more. Year after year, his Arkansas Razorbacks would win 25 to 30 games, terrorize opponents with their 40 Minutes of Hell, be praised for their ability to run and press all night. And year after year
Read More
More News & Articles