Beneath Her Decorous Demeanor, ‘Lady Bird Johnson’ Was a Political Force

The new biography, by Julia Sweig, shows the wife of Lyndon B. Johnson to have been ahead of her time (and possibly her husband) on women’s rights, racial disparities and other issues.
Author: Mimi Swartz
Published: 2021-03-16 05:00 am 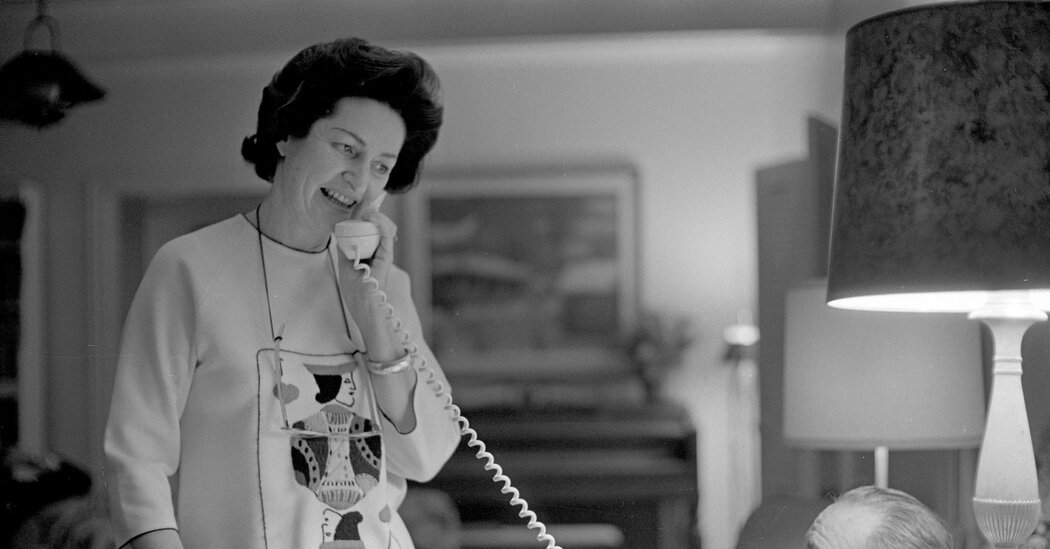 We should all be so lucky as to have a Claudia Taylor, a.k.a. Lady Bird Johnson, in our lives, someone with the self-effacing graciousness of a geisha, the political shrewdness of Cleopatra, the intelligence of a Phi Beta Kappa and the caregiving skills of Florence Nightingale. Without someone with the former first lady’s considerable gifts, the expansive yet explosive 36th president, Lyndon B. Johnson, might have found himself far less effective, while, owing mostly to the times, Lady Bird’s own aspirations had to be channeled through his. Maybe this wasn’t so bad, given that L.B.J. was, from November 1963 to January 1969, the most powerful man on the planet.

Reading between the lines of Julia Sweig’s extensive, engaging new biography, “Lady Bird Johnson: Hiding in Plain Sight,” it is possible to see her as the perfect bridge to the modern first lady — not the visionless helpmeet of a Nancy Reagan, but not quite the fully realized, independent role models of Hillary Clinton or Michelle Obama. To paraphrase the former Texas Governor Ann Richards, Lady Bird did everything more recent first ladies did, but “backwards and in high heels.”.

During Johnson’s term and after, many viewed Lady Bird as a saccharine Southern belle who cared solely about planting bluebonnets along Texas highways — an image that sold well among liberals in the mid- to late 1960s, like the New York Times book critic Christopher Lehmann-Haupt. He described a carefully curated edition of Lady Bird’s White House diary in 1970, as “personal but curiously unrevealing,” a “huge pile of motionless material.”

It would take a modern woman to see through the thick smoke screen of self-deprecation that was Lady Bird’s persona. And to those who do not know her story, Sweig’s book will come as a revelation, showing her to be thoughtful, unstoppable and well ahead of her time (and possibly her husband) when it came to women’s rights, racial disparities, economic inequality, the decline of America’s cities and, especially, conservation and how it related to the quality of public health and public life. “I came very late and timorously to the uses of power,” she wrote in her diary in 1968. “I really turned aside from it, half knowing what could be done with the leverage of the White House.” To which a skeptical reader, having finished Sweig’s book, might ask, “Oh, really?”

“Lady Bird Johnson” is a book in the Caro mold, using Lady Bird, along with tapes and transcripts of her entire White House diary, to tell the history of America during the Johnson years, permitting the reader to see that convulsive time — and to understand the decisions that were made — through the very personal impressions of the first lady. This period encompassed but was not limited to the assassination of John F. Kennedy, the 1964 presidential race, the rise of feminism, the generation gap, the assassinations of Martin Luther King Jr. and Robert F. Kennedy, the riots in major cities and, of course, the toxic spread of the Vietnam War, all of which kept L.B.J.’s truly progressive agenda on civil rights, voting rights, Medicare and Medicaid, among other advances, from ever earning him the credit he deserved. Throughout these moments, Lady Bird was a compassionate and considered guide, someone given to a powerful, almost superhuman, generosity of spirit while maintaining her loyalty to a difficult and demanding man.

This cover-all-bases strategy is the book’s strength and its weakness. “Lady Bird: A Biography of Mrs. Johnson” (1999), by my friend Jan Jarboe Russell, is a warmer and more intimate work by a fellow East Texan who knew, intuitively, where Lady Bird was coming from. And Sweig’s determination to take Lady Bird seriously — to provide a true accounting of her efforts — is admirable; her sources include, in addition to the first lady’s diary and personal papers, dozens of interviews and oral histories. But sometimes this works against the flow of the narrative. Lady Bird’s tireless endeavor, for instance, to turn Washington, D.C., into a habitable place for the desperately poor is rendered in such minute detail that only the most dedicated students of urban history will stick with it. Still, the first lady was ahead of the pack: “For ‘beautification,’ to my mind, is far more than a matter of cosmetics,” she said. “To me, it describes the whole effort to bring the natural world and the man-made world into harmony; to bring order, usefulness and delight to our whole environment.” She said those words at a time when established neighborhoods were routinely bulldozed to make way for highways and hideous public housing monoliths.

As with so many biographies of famous people and famous events, the best parts of “Lady Bird Johnson” are the intimate glimpses of the first lady’s interactions with family and other notable folk. Sweig, who has also written books on Cuba and U.S. foreign policy, is much more sensitive to the nuances of Lady Bird’s complicated relationship with Jacqueline Kennedy than other biographers have been. Instead of the shrinking violet often portrayed in the press, we find Lady Bird stepping in for a pregnant, politics-hating Jackie during J.F.K.’s presidential campaign, and trying her best to comfort her aboard Air Force One in the hours after he had been assassinated. Sweig’s vivid account of a confusing reunion with Jackie during Robert F. Kennedy’s funeral is as powerful as it is heartbreaking.

Lady Bird’s interactions with her daughters are also freshly rendered — having lost her own mother as a child, her late life desire to make up for her own too-busy-with-Lyndon absence from Luci and Lynda Bird is one any mother would understand. (Who wouldn’t worry if her daughter was dating the perpetually tanned actor George Hamilton, who later wrote of Lynda, “Somewhere inside that bookworm was a babe trying to get out.”) Sweig brings the desperation of the escalating Vietnam War home by showing not only Lyndon and Lady Bird’s growing ambivalence and frustration, but that of the Johnson daughters, as both their partners prepared to ship out to Southeast Asia.

If Sweig only glancingly references Lyndon’s dark side — his infidelities, his cruelty, his narcissism — her chronicling of Lady Bird’s regimen of self-preservation is instructive. She was vigilant about her swims in the White House pool, the respites at the Texas ranch, the naps that grew increasingly frequent as her worries about Lyndon’s health grew. Lady Bird’s desperation to get him out of Washington alive began almost as soon as Johnson won election in 1964 and continued until he famously declared he would not run for re-election four years later.

Perhaps the most striking aspect of “Lady Bird Johnson” is how many of the problems addressed in the book are still with us. The first couple tried their damnedest to make life better for all, especially those mired in poverty and racial discrimination. Their vision and ambition seem breathtaking today. Sweig’s book is, finally, a reminder that change does not come easily, and that the best of us continue the fight, whether or not victory is a given.

www.nytimes.com - 8 months ago
Ms. Chalabi, an illustrator, got through a self-imposed quarantine by binge-watching “The Duchess” and reading the graphic novel “Moms.”
Read More

www.nytimes.com - 8 months ago
In a season cut short by the coronavirus pandemic, only 18 shows were eligible for awards. The ceremony is expected to take place in December or January.
Read More

Michou, Whose Drag Cabaret Was the Toast of Paris, Dies at 88

www.nytimes.com - 1 year ago
Since 1956, his jewel box of a club in storied Montmartre has drawn a host of luminaries, turning the proprietor himself into one.
Read More

N.Y.C. doubled ‘cleanups’ of homeless encampments last year, despite C.D.C. guidance to let them be.