Brazil was in political disarray Wednesday as it surpassed 300,000 deaths from COVID-19, the second nation to hit the grim landmark after the United States
Author:
Published: 2021-03-25 03:28 am 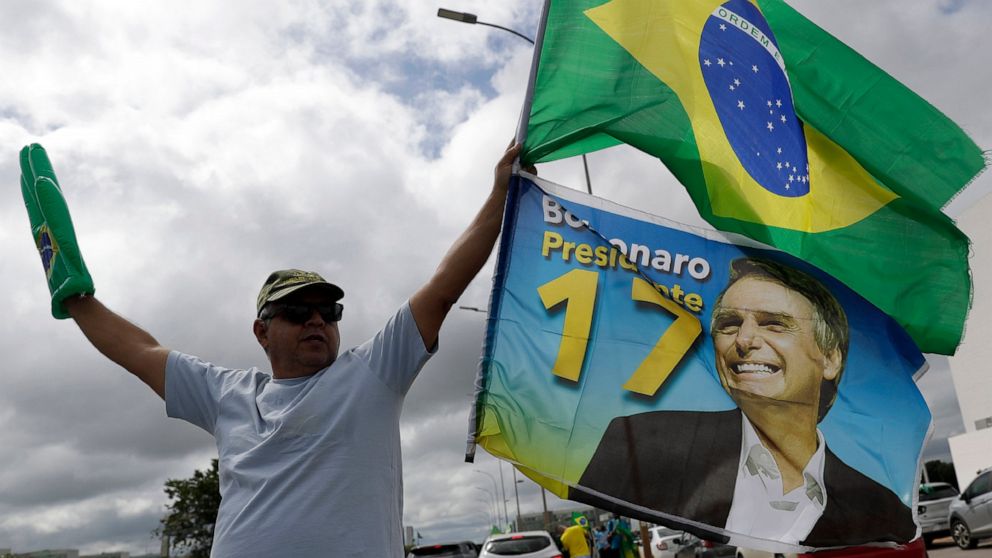 SAO PAULO -- Mere miles from Brazil’s presidential palace, the bodies of COVID-19 victims were laid on floors of hospitals whose morgues were overflowing. Lawmakers fielded calls from panicked constituents across the country, where thousands awaited intensive care beds, and they had no effective health minister to turn to Sunday.

Meanwhile, a smiling President Jair Bolsonaro met hundreds of supporters to pass out pieces of green-and-yellow cake in celebration of his 66th birthday. The mood was jubilant even as the country approached a bleak coronavirus milestone.

Brazil was in political disarray as it surpassed 300,000 deaths from the virus Wednesday evening. Foes and allies alike are pleading with the president to change course to stem a recent surge of daily deaths accounting for almost one-third of the total worldwide.

Bolsonaro this month began shifting rhetoric on the value of vaccines but continues to refuse restrictions on activity he paints as infringement on personal freedom and still promotes unproven COVID-19 cures.

Lawmakers have been seeking ways to prevail upon Bolsonaro. As hospital systems collapse and crucial supplies run dry, four lower house lawmakers told the Associated Press their constituents are calling them his “accomplices.” Two are members of allied parties and spoke on condition of anonymity in order to speak freely.

“There is a lot of solidarity, but everything has its limit. Everything,” the house's speaker, Bolsonaro ally Arthur Lira, said Wednesday afternoon in Congress. “Congress' political remedies are known, and they are all bitter. Some, fatal.”

Opposition Sen. Alessandro Vieira, who is recovering from COVID-19 at home, said the Senate’s president won’t be able to hold back a congressional investigation much longer. Another prominent senator from a centrist party, who spoke on condition of anonymity in order to speak freely, anticipates the chamber opening an investigation next month. That could further damage Bolsonaro’s popularity ahead of his 2022 reelection bid.

Bolsonaro has made some overtures to show he is taking the pandemic seriously -- one year after he first declared it a “little flu.” Tuesday night, hours after Brazil posted a single-day record, he delivered a national address to blame variants for the virus’s more aggressive spread and to defend his administration’s actions to ink deals for more than 500 million vaccine doses.

“We will make 2021 the year of vaccination,” said Bolsonaro, who until recently cast doubt on some vaccines’ efficacy while outright rejecting offers from some producers. Most vaccines his health ministry has secured will only reach Brazilian arms in the second half of 2021. His address was met with pot-banging protests in major cities, including capital Brasilia.

Earlier the same day, the nation’s fourth pandemic health minister was sworn in, a week after he was named. Marcelo Queiroga secured the spot once the original nominee, Ludhimila Hajjar, declined the job.

When interviewing for the position, Bolsonaro and one of his lawmaker sons peppered Hajjar with questions not just about contentious pandemic lockdowns, but also topics of concern to their conservative base, like abortion, according to two ministers present at the meeting, who spoke on condition of anonymity because they’re not authorized to speak publicly. Avid Bolsonaro supporters also launched an aggressive defamation campaign against her, issued death threats and tried to sneak into her Brasilia hotel.

The choice of Queiroga, a Bolsonaro loyalist, convinced some lawmakers that the president still fails to grasp the gravity of the situation.

On Wednesday, Bolsonaro held the first-ever meeting with leaders from all branches of the federal government to coordinate efforts. Once more, he advocated for malaria drugs that have shown no effectiveness in treating COVID-19 and didn’t propose any policies to deal with the pandemic.

He also offered no update on imminent risks to oxygen supply in several states, dwindling stocks of sedatives for intubating COVID-19 patients, nor whether the federal government will resume timely reimbursements to governors for expanding hospital bed capacity. Among Brazil’s 26 states and federal district, 18 are reporting at least 90% intensive care unit occupancy.

Mato Grosso state’s health care system already collapsed. Dr. Maria Auxiliadora Rosa, director of the Hospital Evangélico in the small city Vila Bela, said in a video that went viral on social media that she fears there will be no oxygen for patients by the weekend.

One of the few governors who attended Wednesday’s meeting, Alagoas’ Renan Filho, of the centrist Brazilian Democratic Movement party, was nonplussed by Bolsonaro’s performance.

“The president is trying to change, he is making an effort, but he still has a lot of doubts and not much conviction,” Filho told journalists afterward. “This looks like survival instinct. He is trying to build some national strategy, but it isn’t easy for someone who was so vocal with his narrative.”

Political scientist Luciano Dias, a consultant at Brasilia-based CAC, said Bolsonaro is at his weakest since his administration began in January 2019. A poll by Datafolha published March 17 says 54% of Brazilians disapprove of his pandemic response, up six percentage points from two months earlier.

“The drop in his popularity made him review some of his behavior, such as his interest in vaccines and talking to other authorities,” Dias said. “The president had to bow to reality. The continuation of this crisis raises the risk he starts losing hardcore supporters and sees his reelection chances disappear.”

Opposition lawmaker Alexandre Padilha, a former health minister, highlighted another factor forcing Bolsonaro to adapt: the return of his nemesis, former President Luiz Inácio Lula da Silva. The leftist leader who governed between 2003 and 2010 had his political rights restored this month by Brazil’s Supreme Court and is a likely contender in next year’s election.

“He will push debate forward in Brazil. He is trying to understand the problems, offer solutions,” Padilha said.

Da Silva has already presented himself as a counterpoint to Bolsonaro: always donning face masks in public, backing restrictions on activity to slow the virus’s spread, expressing empathy for victims’ families and reaching out to foreign leaders to boost vaccine supply.

The meeting Wednesday also ostensibly sought to mend fences between Bolsonaro and the Supreme Court, which the president has often accused of undermining his authority during the pandemic by upholding governors’ and mayors’ jurisdiction to impose restrictions on activity.

During the court’s session after the meeting with the president, Justice Luis Roberto Barroso offered a snide review.

US air travel rises to highest levels yet since pandemic hit

abcnews.go.com - 2 weeks ago
Dubai’s budget carrier flydubai has reported a loss of $194 million in 2020 as revenue fell by more than 50% last year due to the coronavirus pandemic
Read More

IS claims killing of 3 female media workers in Afghanistan

abcnews.go.com - 2 months ago
The Islamic State group has claimed responsibility for the killing of three women working for a local radio and TV station in eastern Afghanistan the previous day
Read More

France's hopes lift as US freezes tariffs over tech tax