WWE has the champions it’s been waiting for. A super entertaining Clash of Champions pay-per-view Sunday night saw WWE champion Drew McIntyre continue to show he isn’t your cookie-cutter babyface in his ambulance match with Randy Orton. On the other side,
Author: Joseph Staszewski
Published: 2020-09-28 11:27 am 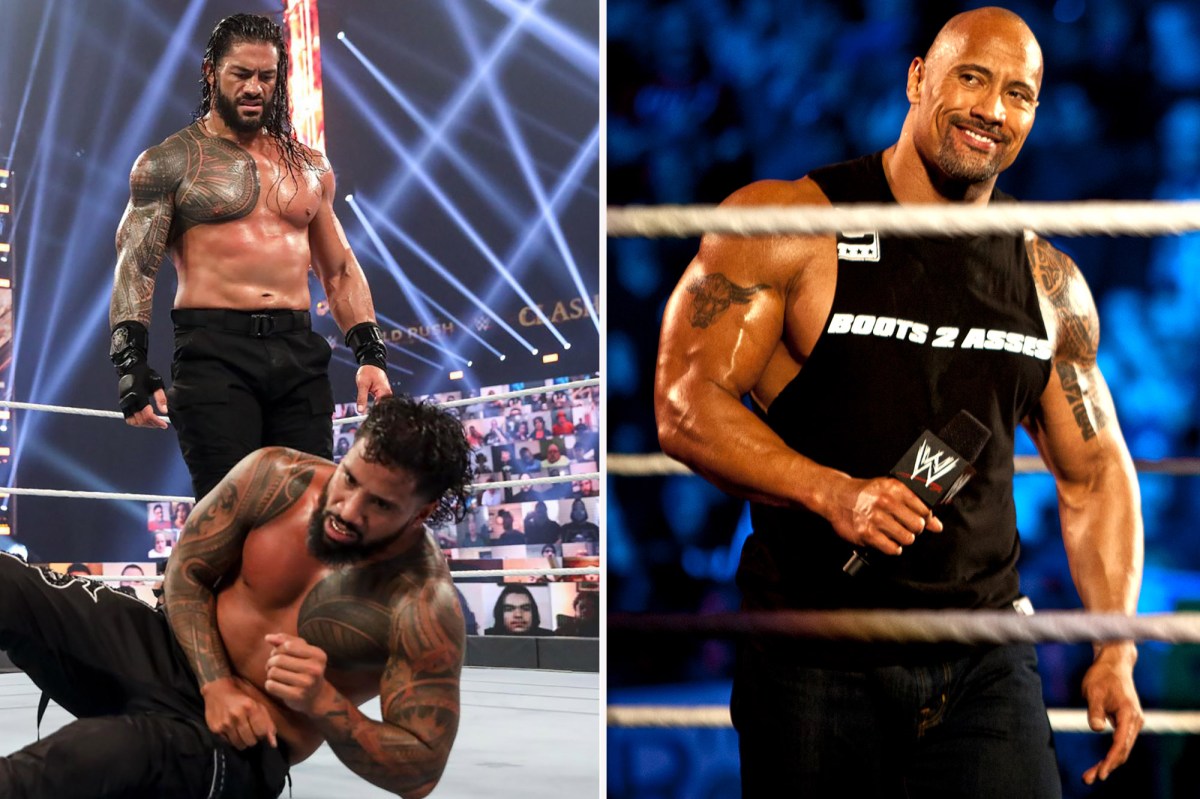 WWE has the champions it’s been waiting for.

A super entertaining Clash of Champions pay-per-view Sunday night saw WWE champion Drew McIntyre continue to show he isn’t your cookie-cutter babyface in his ambulance match with Randy Orton. On the other side, Universal champion Roman Reigns transformed into the scary video-game-boss heel we always knew he could be while decimating his cousin Jey Uso.

The Roman Reigns we knew is no more. Hail to the Chief.

Reigns’ heel turn has been booked superbly and his match – more like beatdown – of his cousin Jey Uso completed it. He wrestled differently, the chest protector was gone (but not his Shield music just yet) and Reigns’ shirtless physique made him look even more impressive. This feels like what Reigns was always meant to be.

He methodically (almost too slow for my liking) beat a valiant Uso into near submission throughout, wanting his little cousin to tell him he’s “the tribal chief” and “the head of the table.” Reigns hit a low blow while kicking out to turn the momentum one final time and gave us a million-dollar smirk. Referee Charles Robinson played his part. He looked at Reigns like he didn’t recognize him while being verbally bullied into letting the match continue.

Uso refused to tell Reigns what he wanted to hear in perfect babyface fashion. It brought out a still injured Jimmy Uso to throw in the towel. He initially relented at his brother behest, but finally did so before telling Reigns he was the tribal chief. The show ended with Reigns looking down on his two cousins after Paul Heyman put on the lei Jey wore to the ring on Reigns as a symbol of his standing in the Samoan Anoa’i family.

While the action seemed to purposely drag, it was fantastic storytelling, It makes you believe this should end with Reigns facing his older cousin The Rock — the true chief of the family — at WrestleMania 37 in Los Angeles in a dream match to bring this full circle. Maybe it is Dwayne Johnson’s retirement match with a WWE Hall of Fame induction, if the pandemic subsides enough that events can be held with fans.

McIntyre and Orton gave us everything an ambulance match should be and a terrific callback-filled story to boot. The majority of the action happened around the vehicle or backstage. All the legends Orton took out this summer — Big Show, Christian, Shawn Michaels and Ric Flair — came back to haunt him, highlighted by a Michaels superkick atop the ambulance and Flair driving it away once McIntyre closed the doors to retain his WWE championship.

The match was fought with the guile expected from two men who nearly put each other in the hospital in storyline. McIntyre Claymored the ambulance door off and Orton sent him crashing into the windshield – leaving his back bloodied.

After the assistance from Michaels, McIntyre delivered a Claymore Kick to Orton, but before closing the ambulance doors he pulled Orton out and hit him with his own punt kick for good measure. Orton nearly won earlier, but McIntyre was able to get his hand on the door at the last minute in a good moment of drama.

This feels like the end of this feud with all the legend attacks. What’s next for McIntyre is uncertain. Is it Keith Lee or does the announced two-day WWE Draft (Oct. 9 on SmackDown and Oct. 12 on Raw) deliver a fresh challenger?

Sami Zayn outdid himself to reclaim the Intercontinental championship he never lost with a unique ladder match finish. Zayn was stripped of the title in May when he chose to stay away from WWE because of the coronavirus pandemic. This reminded you how much his deviousness was missed.

Late in the match, Zayn used Jeff Hardy’s pierced earlobe to handcuff the champion to a small ladder on the outside and then tried to cuff A.J. Styles to the ropes. After failing to do so, Zayn handcuffed the two together.

It left Styles trying to climb the ladder with Zayn on his back as Hardy returned to the ring still handcuffed to the ladder. As Hardy hit Styles with the ladder, Zayn used a key from inside his mouth to uncuff himself and attach the Phenomenal One to the ladder in the center of the ring. It left him free to claim both hanging belts and become undisputed champ.

There were some nasty ladder spots. Hardy, who also fell to the outside as the ladder crashed on top of him thanks to Zayn, pushed a ladder into Styles as he attempted a Phenomenal Forearm. He later did a Swanton Bomb from a ladder on to Zayn, who was laying on another ladder wedged between the announce table and the ring. This feud needs to continue.

We got another chapter to the Bayley-Sasha Banks rivalry. Bayley issued a half-hearted open challenge because her SmackDown women’s championship match with Nikki Cross and the women’s tag title match was called off prior to the start of the show.

Shayna Baszler, Nia Jax and Cross were deemed medically unable to compete by WWE. Jax and Baszler were supposed to defend their belts against the Riott Squad. It will fuel speculation about possible coronavirus ties, either the talent contracting it or being cautious if they were in close proximity with someone who has, but nothing was clear Sunday night.

Instead, WWE had Raw women’s champ Asuka, who had already beaten Zelina Vega, answer Bayley’s challenge. The two had a short match before Bayley used a chair to force a disqualification to retain her title. While gloating, she was attacked from behind by Banks – still in a neck brace. Bayley, after also getting hit with a kendo stick, eventually slipped way.

This felt like the finish that was probably also planned had Bayley faced Cross. In this case, Banks attacking her ex-friend during the match to ensure she, not Asuka, would take the title off Bayley might have made even more sense.

Angel Garza appeared to suffer a lower-body injury late in the match. The referee threw up the caution X, but the action continued in the Raw tag team championship match. Garza tagged in Andrade before rolling to the outside. Montez Ford, after being beaten up by Andrade, was able to tag in Angelo Dawkins. He hit a sidewalk slam and went for the pin.

Andrade clearly kicked up before three, but the bell rang to signal a successful pin to end the match abruptly because of the injury. It confused the announce team. Tom Phillips said: “I apologize. From my vantage point, it appeared Andrade kicked out, but the official said otherwise.” Byron Saxton and Samoa Joe then acknowledged the ref blew the call and Garza and Andrade have “beyond a gripe.” The camera then panned to Garza being tended to at ringside.

WWE was probably right to stop the match, but with a little communication, this might have been handled better. It’s hard to see it happen just a few weeks after a referee incorrectly stopped the Mickie James-Asuka match on Raw.

Asuka over Zelina Vega to retain the Raw women’s championship

Vega and the match exceeded expectations. Asuka showed clear overconfidence, allowing Vega to work her left arm and nearly pin her twice. The move transitions here were smooth, including the finish. They traded pinning combinations until Asuka was able to slip on the Asuka Lock and make Vega tap. No reason for Vega, who attacked Asuka after the match, to go back to full-time managing anytime soon after this.

These two traded plenty of power moves and Crews came close to winning once or twice, but ultimately Lashley retained with his Hurt Lock submission. WWE continues to book Lashley as a dominant force.

nypost.com - 2 months ago
The State Department was forced to scrap a widely excoriated plan to bill US citizens $2,000 or more for their evacuation flights from Kabul.
Read More

Kings’ Tyrese Haliburton makes Knicks pay for passing on him

nypost.com - 9 months ago
Tyrese Haliburton was there for the taking when the Knicks got on the clock with the No. 8 pick in November’s NBA draft. Leon Rose and Co. instead opted for another sliding prospect, Obi Toppin, but Haliburton delivered a close-up view of what the Knicks
Read More

nypost.com - 1 year ago
A 29-year-old man was stabbed to death in Queens on Labor Day, and his attacker has been busted for the slaying, cops said.
Read More