“If anyone’s in the market for some Joe Biden campaign merchandise, I think it’s about to get a whole lot cheaper,” Jimmy Fallon joked on Tuesday.
Author: Trish Bendix
Published: 2020-02-12 02:51 am 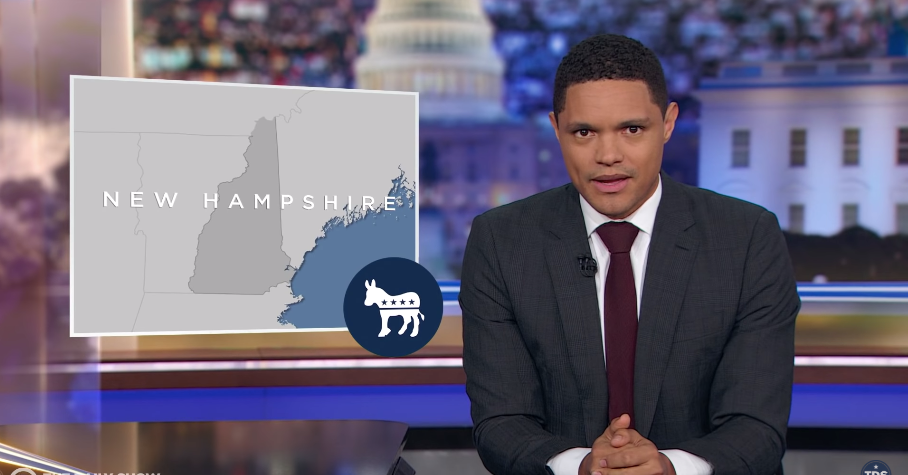 “New Hampshire: It’s the state always asking Vermont to do something about the weed smell. But today they were the state holding the second Democratic primary, and because normally the most exciting thing to do in New Hampshire is watch mountains grow, Election Day gets the people going like nothing else.” — TREVOR NOAH

“The reason the primaries start in Iowa and then go to New Hampshire is because it’s important that we know what the very whitest people think first.” — JIMMY KIMMEL

“Voting in today’s New Hampshire primary started at midnight last night in the 12-person town of Dixville Notch. ‘Dixville Notch’ is also what Joe Biden called a voter that disagreed with him. [Imitating Biden] I’ll pop you in the kisser, you dirty Dixville Notch.” — SETH MEYERS

“Dixville Notch sounds less like a place and more like something Joe Biden would scream after stubbing his toe.” — JAMES CORDEN

“Yep, the New Hampshire primary was held today and good news — if anyone’s in the market for some Joe Biden campaign merchandise, I think it’s about to get a whole lot cheaper.” — JIMMY FALLON

“Based on a lot of polls, Joe Biden was on track to finish the night in fourth or fifth place. I’m not saying Biden is in trouble, but the coronavirus is polling ahead of him, you know?” — JIMMY FALLON

“Today, Joe Biden said that Mickey Mouse could run against President Trump and have a shot. Then Biden found out that he was polling third behind Mickey Mouse.” — CONAN O’BRIEN

“Before the votes were even counted tonight, Biden and his wife flew out to ‘a South Carolina launch party.’ Doesn’t exactly sound confident. That’s like a guy on his wedding saying, ‘To love, honor and cherish till death do us part. Now, if you’ll excuse me, I have a date.’” — STEPHEN COLBERT

“And since it was Joe Biden, he didn’t really leave early as much as wander off. It’s like, ‘Joe? Where’s he going?’” — JIMMY FALLON

“Last night the president was in Manchester for what he described as ‘the biggest political rally in New Hampshire history.’ And when he says something like that, you know it’s true.” — JIMMY KIMMEL

“You can tell he was just trying to go viral. He went onstage and did the broomstick challenge.” — JIMMY FALLON

“During Trump’s rally, he told the crowd, ‘If you want to vote for a weak candidate, pick the weakest one you think.’ Yep. Even Tom Steyer was like, ‘Oh, my god, he mentioned me.’” — JIMMY FALLON

Conan O’Brien and Jim Carrey sketched one another on Tuesday night.

Zoë Kravitz will talk about her new Hulu series, “High Fidelity,” with Jimmy Fallon on Wednesday.

Daniel Mallory Ortberg’s “Something That May Shock and Discredit You” is a humorous take on the masculine mystique, drawing from the author’s transition and moving away from, as Jordy Rosenberg writes in his review, “the damaging trope of tragic transness.”

www.nytimes.com - 11 months ago
Dwindling white support for the president leads to a deficit of at least six points in each state.
Read More

How to Keep the Coronavirus at Bay Indoors

www.nytimes.com - 8 months ago
Tips for dodging the virus as Americans retreat from colder weather: Open the windows, buy an air filter — and forget the UV lights.
Read More

www.nytimes.com - 4 months ago
Traditional automakers have struggled to sell electric cars. That could change as Ford, Volkswagen and others introduce new models.
Read More

www.nytimes.com - 5 months ago
The company said people use its services because they choose to, not because they lack alternatives.
Read More
More News & Articles