The sight of two mice scurrying across a London Underground platform in the evening is, to many, an unwelcome feature of life in the city.
Author:
Published: 2020-02-12 03:15 am 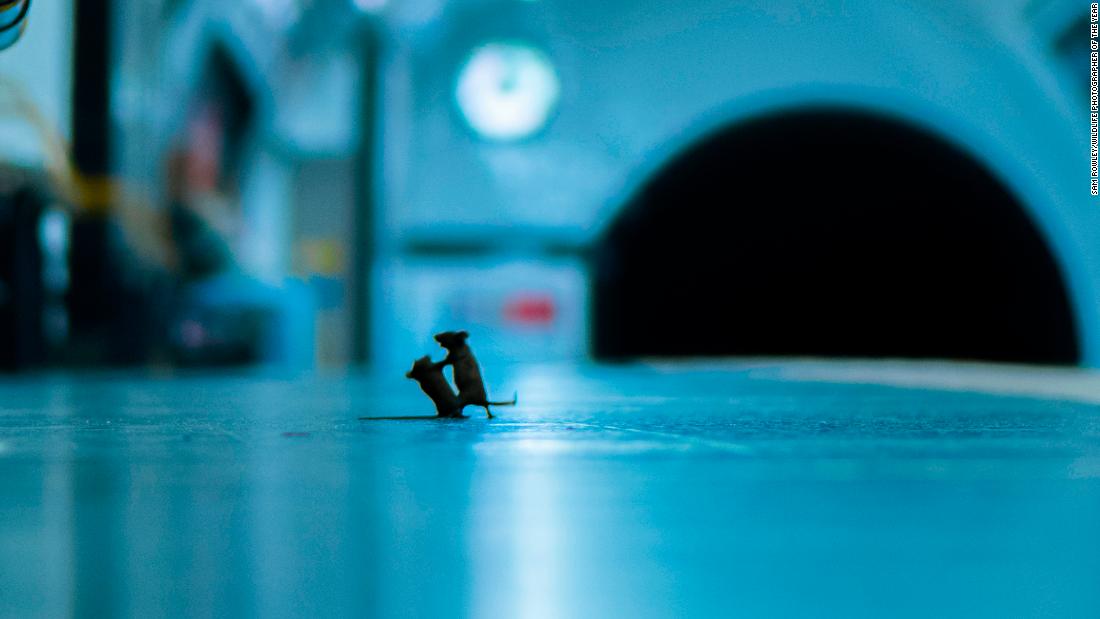 London (CNN) — The sight of two mice scurrying across a London Underground platform in the evening is, to many, an unwelcome feature of life in the city.

But a young photographer is hoping his award-winning shot changes that perception.

Sam Rowley's "Station Squabble" has been picked from more than 48,000 images to claim a wildlife photography award from London's Natural History Museum, voted for by the public.

The image features two mice fighting over a few leftover crumbs in a subway station.

"Everybody knows about the mice on the Underground but I don't think anyone's seen them in that light before," Rowley, a 25-year-old researcher at the BBC, told CNN.

He admitted that he got a handful of "strange looks" from commuters while laying on the floor of various central London stations, but added: "People were quite curious -- they were quite chatty and nice about the whole thing."

Four other shots came highly commended, including an image of an orangutan forced to take part in a performance in Bangkok, another of two jaguars holding an anaconda in Brazil, an image of a rhino and a conservation ranger in Kenya and a photo of a group of white arctic reindeer.

Two jaguars hold a snake in Brazil, in a shot that came highly commended.

Rowley, a semi-professional photographer, had the idea for his winning shot after being sent a video by a friend, who had filmed two mice scrapping while on the way home from a night out.

He subsequently spent about a week visiting station platforms in the evenings, staying until the early hours of the morning.

"I was quite disappointed with what I managed to get at first," he said, adding that the picture "grew" on him over time.

"With the majority of the world living in urban areas and cities now, you have to tell the story about how people relate to wildlife," he said. "Wildlife is fantastic and I think we need to appreciate the smaller and supposedly more difficult animals to live with."

This shot of a ranger and a young rhino in Kenya was also shortlisted.

Michael Dixon, director of the Natural History Museum, said the image of the squabbling mice "provides a fascinating glimpse into how wildlife functions in a human-dominated environment."

"The mice's behavior is sculpted by our daily routine, the transport we use and the food we discard," Dixon added in a press release. "This image reminds us that while we may wander past it everyday, humans are inherently intertwined with the nature that is on our doorstep -- I hope it inspires people to think about and value this relationship more."

"Losing the Fight" by Aaron Gekoski.

The shot was taken at Safari World in Bangkok, Thailand, where shows were briefly suspended in 2004 due to international pressure but today take place on a daily basis.

"Every day, hundreds of people watch them box, dance, play the drums and perform other pointless tricks," Gekoski wrote on Instagram after he was shortlisted for the prize in December.

"Such shows would be incredibly stressful to orangutans, who are gentle and solitary creatures. However, until people vote with their feet and don't visit venues that exploit animals in this way, the shows will continue," he added.

Also recognized was a shot of several arctic reindeer barely visible beneath freezing conditions in Svalbard, a Norwegian archipelago in the Arctic, taken by Francis De Andres.

Francis De Andres' shot of a group of Arctic reindeer.

Another image of two jaguars holding an anaconda in their mouths, taken in Brazil by Michel Zoghzoghi, and a fourth shot by Martin Buzora -- showing a ranger caring for a young rhino in northern Kenya -- made up the shortlist.

A woman made dozens of pipe bombs and intended to hurt people, sheriff says

www.cnn.com - 2 years ago
A Florida woman has been arrested for allegedly making two dozen pipe bombs with the intent of using them to hurt people, the Hillsborough County Sheriff said Friday.
Read More

www.cnn.com - 2 months ago
Goldman Sachs' CEO says the bank will strengthen enforcement of its "Saturday rule" and speed up hiring of junior bankers after a group of analysts described "inhumane" working conditions, including 95-hour weeks and instances of workplace abuse.
Read More