Ecuador’s President Lenin Moreno has been forced to apologize after dismissing a woman who had complained that her family was hungry as a “fatty.” The offensive comment is just the latest self-inflicted wound from a head-of-government whose administration
Author: Simeon Tegel
Published: 2021-04-08 03:11 pm 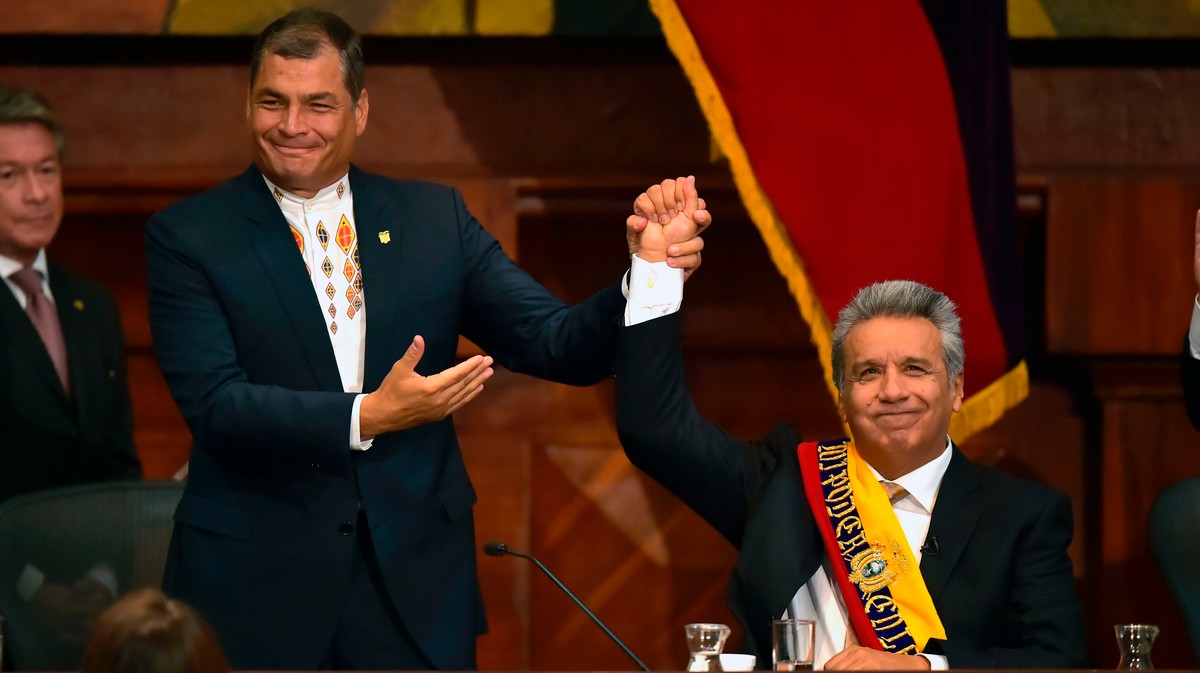 Ecuador’s President Lenin Moreno has been forced to apologize after dismissing a woman who had complained that her family was hungry as a “fatty.”

The offensive comment is just the latest self-inflicted wound from a head-of-government whose administration made a strong start before losing its way. A mishandled economic austerity package, botched coronavirus pandemic response and a series of verbal gaffes, including last year claiming that women only complain about sexual harassment from “ugly” men, are just some of the Moreno government’s blunders.

Its strong start included winning overwhelming backing in a 2018 referendum for constitutional changes to dismantle the legacy of his polarizing predecessor, the populist socialist Rafael Correa, who gave asylum to Wikileaks founder Julian Assange.

The vote stopped mining and oil drilling in sensitive natural areas and even introduced presidential term limits — a move that blocked Correa from returning to power.

It was a watershed moment in the relationship between the burly, abrasive Correa and his now estranged protégé and former vice president, Moreno, who has penned various books on the importance of having a sense of humor and uses a wheelchair after being shot during a robbery.

Now, Ecuador is at a crossroads, with a runoff presidential vote this Sunday between conservative banker Guillermo Lasso, 65, and Correa’s latest handpicked successor, Andrés Arauz, a 36-year-old economist. At stake is a range of issues central to a healthy democracy, including, if Arauz wins, the anticipated resumption of the attacks on free speech and the independence of the courts that were the hallmarks of Correa’s time in office.

Within Ecuador, Arauz is widely seen as beholden to Correa, who is currently in exile in Belgium, his wife’s homeland, after being sentenced in absentia last year to an eight-year sentence for accepting a $7-billion bribe.

Arauz’s campaign promises include a $1,000-handout to one million poor families and a new constitution — despite the fact that the current constitution was drawn up under Correa just 13 years ago — that would overhaul the legal system. Many fear that would pave the way to overturning Correa’s conviction, allowing him to return to Quito and become a backseat driver in an Arauz administration.

Currently, Arauz, a former culture minister in Correa’s government, is running neck and neck in the polls with Lasso. That is despite winning the first round in February by 32.7 percent to Lasso’s 19.7 percent.

Arauz is widely seen as lacking the charisma of Correa, who seemed to thrive on conflict. He picked fights with everyone from the White House to Ecuador’s environmentalists, whose initial support he betrayed by opening up the Yasuni National Park, a global biodiversity hotspot and home to some of the Amazon’s last uncontacted indigenous tribes, to oil exploration.

“Arauz has run a lackluster campaign,” says Sebastian Hurtado, of Quito-based political risk consultancy Profitas. “He hasn’t managed to establish himself as truly independent from Correa.”

Lasso is also benefiting from the support of two left-wing first-round candidates, Xavier Hervas, who picked up 15.7 percent in the first round, and Yaku Perez, who took 19.4 percent.

Perez, a soft-spoken former regional governor running on an environmental and indigenous rights platform, had initially refused to take sides in the runoff, in part over his opposition to Lasso’s plans to promote mining and oil drilling.

But last month Perez, who was arrested five times for protesting against Correa’s presidency, put those differences aside to announce he was supporting the banker to avoid the return of Correismo, as the movement founded by Correa is known, which he said “criminalized and persecuted” its opponents.

Lasso, a member of the ultraconservative Catholic group Opus Dei and an avid free marketeer, has been forced to promise he will not impose his personal morality on Ecuadorians. He has also had to offer more support for the poor in order to compete with Arauz at a time of national calamity for Ecuador’s 17 million citizens. That includes promising to raise the country’s minimum wage from $400 to $500 per month.

Officially, Ecuador has had 339,000 coronavirus cases. Its largest city , the Pacific port of Guayaquil, was so badly hit at the start of the pandemic that families were forced to abandon the corpses of loved ones in the street.

Yet even before the coronavirus hit, Ecuador was struggling economically. In 2019, Moreno was forced to implement an austerity program that resulted in deadly riots in Quito.

Although economists agreed the belt-tightening was necessary, after years of overspending by Correa, Moreno was accused of mishandling the cuts, including ignoring warnings from the International Monetary Fund to protect the poorest.

During his time in office, Correa slashed the poverty rate from 36.7 percent to 21.5 percent, according to the World Bank. But Correa’s largess was fueled by high commodity prices, which subsequently crashed, and Chinese loans, which must now be repaid. Despite having an economics PhD from the University of Illinois, Correa left Ecuador few reserves for the inevitable rainy day.

He also oversaw a withering of democracy, according to his critics, including many on the left. That included cracking down on the free press so harshly that Human Rights Watch once called his systematic attempts to silence critics, even on social media, “Orwellian.” On his watch, bureaucrats fined newspaper cartoonists who dared to poke fun at the president.

That austerity, the government’s perceived mishandling of the pandemic and Moreno’s own verbal gaffes saw his approval rating plummet to single figures. With no chance of winning, Moreno opted not to run for reelection, paving the way for Lasso to defend his democratic and economic reforms against the potential return of Correismo.

Although Arauz has avoided confronting the media, Correa has launched blistering attacks on the “corrupt press” and has been singling out individual journalists by name, including those writing about corruption in his government. “Until the media issue is resolved, there won’t be true democracy in Latin America,” he recently claimed.

Cesar Ricaurte, executive director of Quito-based media think tank Fundamedios, which Correa once tried to shutter, says Correa’s vociferous campaigning for Arauz, including on Twitter, has been marked by his desire for revenge on the media. “There is a real fear that the attacks on the press that we saw during Correa’s presidency will be multiplied if Arauz wins,” Ricaurte said.

Ecuadorians voting on Sunday will need to weigh that risk against Arauz’s campaign promise of a return to greater social spending at a time of deep need, even if it will be effectively put on the national credit card.