Sliding in the Polls, Erdogan Kicks Up a New Storm Over the Bosporus

As part of a push to carve a canal alongside the waterway, Turkey’s president signaled that he could scrap a treaty that has kept peace in the region for decades.
Author: Carlotta Gall
Published: 2021-04-10 10:49 am 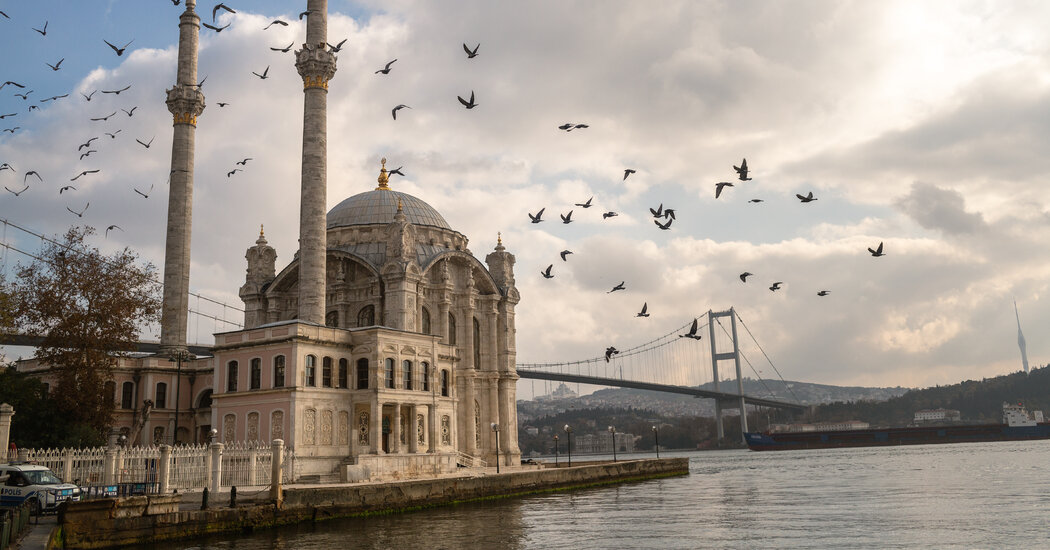 ISTANBUL — The unpredictable roller coaster that has become Turkish politics was on full display this past week after 104 retired admirals publicly challenged President Recep Tayyip Erdogan in an open letter — and 10 of them ended up in jail, accused of plotting a coup.

It was no accident that the episode came as Mr. Erdogan finds himself in the midst one of the most intense political passages of his career, as the worsening pandemic and economy have left the president sliding in the opinion polls even as he amasses more powers.

To inspire the party faithful, Mr. Erdogan has returned again to herald one of his favorite grand ideas: to carve a canal, through Istanbul, from the Black Sea to the Marmara Sea to open a new shipping route parallel to the narrow Bosporus.

For now, the use of those natural waterwaysis governed by the Montreux Convention, an international treaty forged in 1936, between the two World Wars, in an attempt to eliminate volatile tensions over one of the world’s most vital maritime choke points.

Alongside his support for the canal construction project, Mr. Erdogan has signaled that he could dispense with the treaty. A spokesman for the Justice and Development Party, or A.K.P., told a television presenter last month that the president had the power to do so if he wanted.

Alarm was not long in following.

Under the treaty, Turkey agreed to free passage of civilian and trade vessels but a strict control of warships, especially of outside powers, which has held the peace in the region. While analysts say that reneging on the agreement is both unlikely and dangerous for Turkey, the mere suggestion threatens to send ripples of anxiety throughout the region and beyond.

Among the first to object strongly were Turkey’s own retired admirals, who last weekend put their names to an open letter on a nationalist website warning that the Montreux Convention was an important founding document for Turkey’s security and sovereignty and should not be put up for debate.

On Monday, Mr. Erdogan confirmed Turkey’s commitment to the treaty but denounced the admirals. On Wednesday, he came out roaring and combative with a speech to A.K.P. lawmakers, blaming the main opposition party, the Republican People’s Party, for the whole episode.

The issue, the political columnist Murat Yetkin wrote on his blog, the Yetkinreport, “shifts the current agenda from the pandemic and the economy to fields that the A.K.P. likes.”

The pandemic’s toll is now worse than ever in Turkey, with more than 50,000 new cases recorded daily. An increasingly sharp economic crunch looms, too, as the government’s pandemic support for businesses is scheduled to end and inflation and unemployment remain alarmingly high.

In the midst of the troubles, Mr. Erdogan’s party has slipped to below 30 percent in a recent opinion poll, and his political ally, the Nationalist Movement Party, has fallen as low as 6 percent, making his re-election to the presidency in 2023 seem increasingly difficult.

Even his own supporters recognize that a bruising fight lies ahead. “We have entered the long two-year election process leading to the 2023 elections,” Burhanettin Duran, the director of SETA, a pro-government research organization, wrote in a column in the Daily Sabah newspaper this past week.

“Due to the recent declaration,” he said, referring to the admirals’ letter, “now there is a possibility that the process will be painful.” He predicted a combined domestic and international campaign against Mr. Erdogan’s government.

Mr. Erdogan has promised that his multibillion-dollar canal plan would create a construction and real estate boom and bring in revenue from an increase in shipping traffic.

Opposition parties have denounced the project as a corrupt, moneymaking scheme, warning that the canal would be financially unsustainable and would destroy Istanbul with uncontrolled urban sprawl.

Investigative journalists have exposed real estate deals in which prospectors from the Middle East have bought up much of the land along where the canal will be built.

Yet Mr. Erdogan said at a regional party congress in Istanbul in February that the project would go ahead, despite opposition.

“They don’t like it, do they? They are trying to prevent it, aren’t they?” he said in his keynote speech. “Despite them, we will build the Istanbul Canal.’’

The admirals are far from the only opponents of the canal. Others include the popular mayor of Istanbul, Ekrem Imamoglu, along with environmentalists, ecologists and urban planners.

But the admirals raised particular ire from Mr. Erdogan and his fellow Islamists by including in their letter criticism of a currently serving admiral who was caught on video attending prayers with a religious sect.

The retired admirals made a point of reaffirming their adherence to the secular ideals of the Turkish republic’s founding father, Mustafa Kemal Ataturk.

Ten of the signatories were detained on Monday, and another four were ordered to report to the police but were not jailed in view of their advanced years. Mr. Erdogan accused them of plotting a coup, a toxic allegation after four years of thousands of detentions and purges since the last failed coup. Some saw that as a warning to serving officers who might have similar thoughts.

Mr. Erdogan had “got his groove back” Steven A. Cook, a senior fellow for Middle East and Africa Studies at the Council on Foreign Relations in New York, wrote in an analysis.

The admirals’ letter did not come out of the blue. A year earlier, 126 retired Turkish diplomats had penned an open letter warning against withdrawing from the convention. The debate reveals the deep divisions between secularists and Islamists that have been tearing Turkey apart since Mr. Erdogan’s rise to power in 2002.

Caught up in their own dislike of the secular republic that replaced the Ottoman Empire, the Islamists distrust the Montreux Convention, said Asli Aydintasbas, a senior fellow with the European Council on Foreign Relations. That was an erroneous reading of history, she added, but Mr. Erdogan feels that the convention needs “to be modernized to meet Turkey’s new coveted role as a regional heavyweight.”

Secularists, as well as most Turkish diplomats and foreign policy experts, see the Montreux Convention as a win for Turkey and fundamental to Turkish independence and to stability in the region.

Russia would have most to lose from a change in the treaty, said Serhat Guvenc, a professor of international relations at Kadir Has University in Istanbul, although any alteration or break up of the convention seems inconceivable, since it would demand consensus from the multiple signatories.

“Russia would resent it and be provoked,” he said. The United States and China would gain, since neither currently is allowed to move large warships or aircraft carriers into the Black Sea.

Most analysts said that Mr. Erdogan and his advisers knew the impossibility of changing the Montreux Convention, but that the veteran politician is using the issue to kick up a storm.

“It is the government’s way of lobbying for the canal,” Ms. Aydintasbas said. “Erdogan is adamant about building a channel parallel to the Bosporus, and one of the government’s arguments will likely be that this new strait allows Turkey to have full sovereignty — as opposed to the free passage of Montreux.”

That interpretation is both inaccurate and dangerous, she said. “Inaccurate because as long as Montreux is there, no vessel is obliged to use the new canal. Dangerous because it could aggravate the Russians and the international community.”

The Greek Alphabet Will No Longer Be Used to Name Hurricanes

www.nytimes.com - 7 months ago
As seniors find themselves cut off from loved ones during the pandemic, some are turning to automated animals for company.
Read More

www.nytimes.com - 2 months ago
The 11-month-old audio social network is compelling. It also has some very grown-up problems.
Read More

www.nytimes.com - 6 months ago
Researchers ended a clinical trial of the drug early because the results were so convincing. The more effective drug would be given in six injections a year instead of as 365 daily pills.
Read More
More News & Articles